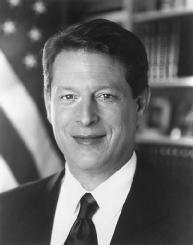 He has been a reporter, an environmentalist, a congressman, and served as vice president of the United States, but Al Gore may go down in history as the unsuccessful candidate in possibly the most contested presidential race the United States has ever seen. Having spent the majority of his life in the political ring, Gore made two unsuccessful bids for the presidency. The first came in 1988, when he was a fledgling senator; the second was in 2000, following two terms as vice president under bill clinton. In the protracted 2000 race, Gore won the popular vote, but lost the electoral vote to george w. bush. He became the third candidate in history to receive the greatest share of the popular vote, but lose the presidency. In 2002, Gore announced that he would not try for the office a third time, claiming,"there are many other exciting ways to serve."

Gore was born in Washington, D.C., on March 31, 1948. His father, Albert Gore Sr., at the time served as a Democratic member of the U.S. House of Representatives from Tennessee. The senior Gore was to serve in the House and the Senate for nearly three decades. His mother was Pauline LaFon Gore. She had the distinction of being one of the first women to graduate from the law school at Vanderbilt University.

Gore attended St. Alban's Episcopal School for Boys in Washington, D.C., where he was an honor student and captain of the football team. In 1969, he received a B.A. with honors in government from Harvard University. He was interested in becoming a writer, rather than following his father's footsteps as a politician. After graduation he enlisted in the army, although he opposed the intervention of the United States in the Vietnam War.

While stationed in Vietnam, Gore served as an army reporter. After Gore left the military service in 1971, the Nashville Tennessean hired him as an investigative reporter and, later, as an editorial writer. In addition to his journalism career, Gore was a home builder, a land developer, and a livestock and tobacco farmer.

Interested in religion and philosophy, Gore enrolled in the Graduate School of Religion at Vanderbilt University during the 1971–72 academic year. In 1974, he entered Vanderbilt's law school but left to enter elective office two years later.

In 1976, Gore ran for a seat in the U.S. House of Representatives. He won the primary election against eight other candidates and went on to win in the general election. He ran successfully in the three following elections. Gore claimed some early attention in 1980 when he was assigned to study nuclear arms as a member of the House Intelligence Committee. He researched and eventually published a comprehensive manifesto on arms restructuring for future security, which was published in the February 1982 issue of Congressional Quarterly. In 1984, Gore campaigned for a seat in the U.S. Senate that had just become vacant. He won that office with a large margin of votes.

While in Congress, Gore focused on several issues, including health care and environmental reform. He worked for nuclear Arms Control and Disarmament, as well as other strategic defense issues. He also stressed the potential of new technologies, such as biotechnology and computer development.

As the decade came to a close, Gore set his sights on the race for the 1988 presidential election. Only 39 years old at the time, he ran on traditional domestic Democratic views and was tough on foreign policy issues. He failed, however, to develop a national theme for his campaign and was criticized for changing positions on issues. Gore was successful in gaining public support in the primaries during the early spring and won more votes than any other candidate in southern states. However, he obtained only small percentages of votes in other states and withdrew from the presidential nomination campaigns in mid-April.

Two years later Gore won election to a second term in the U.S. Senate. He chose not to seek the presidency in 1992, citing family concerns (his son Albert had been hit by an automobile and was seriously injured). It was during this time that Gore wrote the book Earth in the Balance: Ecology and the Human Spirit, which expressed his concern, ideas, and recommendations on conservation and the global environment. In the book he wrote about his own personal and political experiences and legislative actions on the environmental issue. One of Gore's statements in the book that sums up his philosophy regarding the environment and human interaction is,"We must make the rescue of the environment the central organizing principle for civilization."

"No matter how hard the loss, defeat might serve as well as victory to shake the soul and let the glory out."
—Al Gore

In the summer of 1992, Bill Clinton selected Gore as his vice presidential nominee. The choice startled many people because it ended a long-standing pattern of a candidate choosing a vice presidential nominee to "balance the ticket." Both men were of the same age, region, and reputation and moderate in political outlook. Gore did balance Clinton's strength, however, by bringing to the ticket his experience in foreign and defense policy, expertise in environmental and new technology matters, and an image as an unwavering family man.

Clinton and Gore won the election in 1992, and Gore was inaugurated as the 45th vice president on January 20, 1993. At the age of 44 years, he became one of the youngest people to hold the position. Clinton and Gore were reelected in 1996, running against Republicans bob dole and Jack Kemp.

During his time as vice president, Gore continued to stress environmental concerns. In 1997, the White House launched an effort to start producing a report card on the health of the nation's ecosystems. This project was carried out by an environmental think tank and initiated by Gore.

That same year, however, Gore's reputation was somewhat tarnished when he was accused of and admitted to making fund-raising telephone calls from the White House during the 1996 presidential campaign. Gore held a press conference on March 3, 1997, to defend his actions, saying there was nothing illegal about what he had done, although he admitted it may not have been a wise choice. Gore was also criticized for toasting Li Peng, initiator of the Tiananmen Square Massacre, during a trip to China. In September 1997, Buddhist nuns testified before the Senate panel investigating the abuses of campaign fundraising. The nuns admitted that donors were illegally reimbursed by their temple following a fund-raiser attended by Gore, and that they had destroyed or altered records to avoid embarrassing their temple. Some believe these incidents further damaged Gore's reputation.

Despite questions of impropriety, Gore announced his candidacy for president in 1999. By early 2000, he had secured the majority of Democratic delegates for the 2000 elections. Gore chose Connecticut Senator Joseph Lieberman as his running mate to face Texas governor George W. Bush and Richard Cheney, former secretary of defense. Although Bush took an early lead in the polls, the Gore campaign closed the gap. Gore sought not only to demonstrate his compassion in a variety of speeches, but also to distance himself from Clinton. As the November 7 election approached, most observers predicted a deadlock.

During the afternoon of November 7, 2000, it appeared as if Gore would win the election, and several media outlets declared him the unofficial winner. However, vote tallies from the late afternoon and early evening revealed that Bush had closed the gap. By the evening of November 7, the totals showed that although Gore had won the popular vote, Bush won the Electoral College. Gore immediately requested a recount of the votes in the state of Florida, where voting procedures had caused a great deal of controversy. For the next month, the results of the election hung in the balance as both sides postured in a series of court disputes. However, the U.S. Supreme Court, in Bush v. Gore, 531 U.S. 98, 121 S. Ct. 525, 148 L. Ed. 2d 388 (2000), over-turned an order by the Florida Supreme Court requiring a recount of ballots in several counties. Gore then conceded the election to Bush.

In 2001, Gore accepted a position at the Columbia Graduate School of Journalism as a visiting professor. He has also accepted teaching positions at universities in his home state of Tennessee. Although many observers expected him to run again for president in the 2004 elections—and although a number of grassroots organizations have urged his running—Gore announced in December 2002 that he would not enter the race. "I personally have the energy and drive and ambition to make another campaign, but I don't think it's the right thing for me to do," he said in an interview with the CBS program 60 Minutes. "I think that a campaign that would be a rematch between myself and President Bush would inevitably involve a focus on the past that would in some measure distract from the focus on the future that I think all campaigns have to be about."

Gore married his college sweetheart, Mary Elizabeth "Tipper" Aitcheson, in 1970. Tipper Gore holds a B.A. degree from Boston University and an M.A. in psychology from George Peabody College at Vanderbilt University. She is actively involved in a number of issues, including AIDS, education, and homelessness. She has also has been a longtime advocate for mental health, and gained national attention in the 1980s through her efforts to influence the record industry to rate and label obscene and violent lyrics. She was cofounder of the Parents' Music Resource Center, which monitors musical and video presentations that glorify casual sex and violence. The Gores have four children: Karenna, Kristin, Sarah, and Albert III.