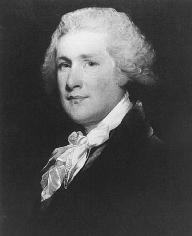 Alexander James Dallas achieved prominence as a jurist, statesman, and author. Dallas was born June 21, 1759, in Jamaica, British West Indies. He relocated to the United States, becoming a citizen in 1783.

In 1785, Dallas was admitted to the Pennsylvania bar and began his judicial career as counselor of the Pennsylvania Supreme Court. Six years later he acted as secretary of the Commonwealth of Pennsylvania. He also performed editorial duties on the first series of the U.S. Supreme Court Reports and served as U.S. district attorney from 1801 to 1814, before entering the federal government system.

Dallas became secretary of the treasury in 1814 and remained in the cabinet of President James Madison for two years. He gained recognition during his tenure for his policies advocating protective tariffs, public credit, and the formation of the Second Bank of the United States. His programs were responsible for restoring the United States to a strong financial position after several years of depression. In addition to these duties, he served concurrently as acting secretary of war from 1815 to 1816.

As an author, Dallas wrote many noteworthy publications, including Features of Mr. Jay's Treaty (1795); Laws of the Commonwealth of Pennsylvania, four volumes (1793 to 1801); Reports of Cases Ruled and Adjudged in the Several Courts of the United States and Pennsylvania, four volumes (1790 to 1807); and Treasury Reports: An Exposition of the Causes and Character of the War (1815).

"Over their representatives the people have a complete control, and if one set transgress they can appoint another set, who can rescind and annul all previous bad laws."
—Alexander J. Dallas

Bank of the United States.

Feedback
Flashcards & Bookmarks ?
Please log in or register to use Flashcards and Bookmarks. You can also log in with
Flashcards ?
My bookmarks ?
+ Add current page to bookmarks
Mentioned in ?
References in periodicals archive ?
Near the end of that war, the American Treasury Secretary, Alexander James Dallas, wrote An Exposition of the Causes and Character of the War, a book-length justification for the decision to go to war.
Causes and Character of the War of 1812