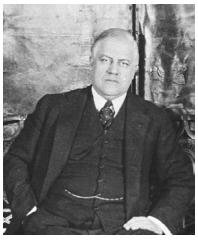 Alexander Mitchell Palmer served as U.S. attorney general from 1919 to 1921. Palmer, who also served as a congressman and federal judge, became a controversial figure for rounding up thousands of Aliens in 1920 that he considered to be politically subversive. These "Palmer raids" violated basic civil liberties and ultimately discredited Palmer. Palmer was born May 4, 1872, in Moose-hood, Pennsylvania. He graduated from Swarthmore College in 1891 and then studied law at Swarthmore, Lafayette College, and George Washington University. Though he did not earn a law degree, he passed the Pennsylvania bar exam and was admitted to the bar in 1893. He entered a small law firm in Stroudsberg, Pennsylvania, and practiced there until 1901. He then became a solo practitioner.

"Fully 90 percent of the Communist and anarchist agitation is traceable to aliens."
—A. Mitchell Palmer

During the 1890s, Palmer became active in Democratic Party politics. He was elected to the U.S. House of Representatives in 1908 where he served until 1915. In 1912 he played a key role in securing the Democratic presidential nomination for New Jersey governor woodrow wilson. Following Wilson's victory that fall, Wilson asked Palmer to join his cabinet as secretary of war. Palmer's pacifist Quaker beliefs, however, precluded him from accepting the office.

In 1914 he ran for the U.S. Senate but lost. In April 1915 Wilson appointed him a judge of the United States Court of Claims. It was a brief appointment. He resigned in September and returned to his law practice. He continued his political career, however, serving as a member of the Democratic National Committee during Wilson's eight-year term.

In March 1919 Wilson appointed Palmer U.S. attorney general. Though World War I was over, the Bolshevik Revolution in Russia caused political hysteria in western Europe and the United States. The Communist movement advocated world revolution, and U.S. leaders suspected that left-wing radicals, who were primarily aliens, were plotting to overthrow the government.

Palmer used the Espionage Act of 1917 and the Sedition Act of 1918 to begin a crusade against this perceived threat. He deported the anarchist Emma Goldman and many other radicals, but these actions were a prelude to his unprecedented dragnets. On January 2, 1920, at Palmer's direction, federal agents in thirty-three cities rounded up six thousand persons suspected of subversive activities. Agents entered and searched homes without warrants, held persons without specific charges for long periods of time, and denied them legal counsel. Hundreds of aliens were deported. Palmer's actions were part of an anti-Communist "Red Scare" that ignored civil liberties in the pursuit of rooting out allegedly subversive activities. He steadfastly defended the raids in the face of widespread protests.

Palmer sought to succeed Wilson as president but lost the Democratic Party nomination in 1920. After leaving the office of attorney general in March 1921, Palmer resumed his private law practice and remained active in Democratic Party politics, campaigning for presidential candidate Alfred E. Smith in 1928 and franklin d. roosevelt in 1932.