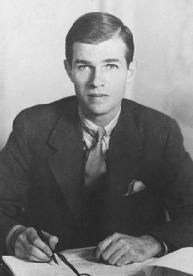 In 1948 Alger Hiss was accused of spying on behalf of the Soviet Union. He was convicted in 1950 and sentenced to five years in prison.

For the United States, the prosecution of Alger Hiss was a pivotal domestic event of the Cold War. A former high-ranking federal official with a seemingly impeccable reputation, Hiss was accused in 1948 of having spied for the Soviet Union. The charges shocked the nation. Not only had Hiss held government positions of extreme importance, but he was also one of the architects of postwar international relations, having helped establish the United Nations. He steadfastly maintained his innocence in hearings before the House Un-American Activities Committee (HUAC). But a relentless probe by the committee's lead investigator, Representative richard m. nixon, of California, led to a Grand Jury investigation. In 1950, Hiss was convicted of two counts of perjury, for which he served forty-four months in prison. His case became a cause célèbre for liberals, who regarded him as a victim of the era's anti-Communist hysteria. It also fueled a passion for anti-Communist investigations and legislation that preoccupied Congress for the next several years.

Before coming under suspicion, Hiss had a meteoric rise in public service. A Harvard graduate in 1929, the International Law specialist served in the Departments of Agriculture and Justice from 1933 to 1936. He then moved to the State Department, where he assumed the post of counselor at global conferences during World War II. In 1945, Hiss advised President franklin d. roosevelt at the Yalta Conference, at which the Allied powers planned the end of the war. He was forty-one years old. Next came a leading role in the establishment of the United Nations, appointment to the administration of the U.S. Office of Special Political Affairs, and, in 1946, election to the presidency of the Carnegie Endowment for International Peace. As a statesman, Hiss had proved himself in no small way; his career had earned him the highest confidence of his government in times of crisis.

But soon Hiss was swept up in a round of damaging public accusations. By the late 1940s, the U.S. House of Representatives had spent several years investigating Communist influence in business and government. This was the work of HUAC, first established in 1938 and increasingly busy in the years of suspicion that followed World War II. In August 1948, HUAC heard testimony from Whittaker Chambers, an editor at Time magazine, who had previously admitted to spying for the Soviet Union. Now Chambers fingered Hiss. He charged that Hiss had secretly been a Communist party member in the 1930s, and most dramatically, he accused Hiss of giving him confidential State Department documents to deliver to the Soviets in 1938.

Accusations of Communist affiliation were common at HUAC hearings—in a sense, they were its chief business. The process of naming names was triggered by the committee's threat of legal action against witnesses who did not cooperate. But even by HUAC's standards, the accusations against Hiss were spectacular. Furthermore, Chambers had evidence. He offered the committee microfilm of the confidential documents, which he claimed had been prepared on Hiss's own typewriter. The charges particularly excited committee member Nixon, a California freshman, who used them to establish his credentials as a tough anti-Communist. In a highly publicized event, Chambers took Nixon to his Maryland farm, where the microfilm was hidden in a hollow pumpkin. Hiss was soon called before HUAC to be grilled by Nixon. He denied Chambers's accusations and dramatically questioned Chambers himself in a vain attempt to clear his name.

A grand jury was impaneled and held hearings in December 1948. Because of the Statute of Limitations, Hiss could not be tried on charges of Espionage in 1948 for allegedly passing documents to the Soviets in 1938. But the grand jury returned a two-count indictment of perjury: it charged that he had lied about giving Chambers the official documents in 1938, and when claiming that he had not even seen Chambers after January 1, 1937.

After his first trial in 1948 ended in a hung jury, Hiss was retried in 1950 (United States v. Hiss, 88 F. Supp. 559 [S.D.N.Y. 1950]). Hiss's defense hinged on portraying Chambers, the government's primary witness, as unreliable. He claimed that Chambers was a psychopathic personality prone to chronic lying. In what became the seminal ruling of its kind, the court admitted psychiatric evidence for the reason of discrediting the witness. But despite challenging Chambers's credibility, the validity of Chambers's testimony, and the accuracy of other evidence, Hiss was convicted. Sentenced to five years in prison, he served nearly four years. His career in law and public service was ruined. He spent the next two decades working as a salesman while writing books and giving lectures.

The question of Hiss's guilt has divided intellectuals for decades. Hiss always maintained his innocence—in 1957, when he published a memoir, In the Court of Public Opinion, and even more in 1975, when, with prominent help, he successfully sued for reinstatement to the bar of Massachusetts (In re Hiss, 368 Mass. 447, 333 N.E.2d 429). Since 1975, some word-smiths have used Federal Bureau of Investigation files to argue in favor of or against Hiss's guilt: notably, author Allan Weinstein in Perjury (1978) and editor Edith Tiger in In Re Alger Hiss (1979).

The Hiss case profoundly affected the politics of its era. It gave impetus to anti-Communist sentiment in Washington, D.C., which led to more hearings before HUAC as well as legislation such as the McCarran Act (50 U.S.C.A. § 781 et seq.), intended as a crackdown on the American Communist party. The case also helped launch the careers of Nixon and of Senator joseph r. mccarthy, of Wisconsin, providing the latter with ammunition for an infamous crusade against alleged Communist infiltration of the federal government.

Feedback
Flashcards & Bookmarks ?
Please log in or register to use Flashcards and Bookmarks. You can also log in with
Flashcards ?
My bookmarks ?
+ Add current page to bookmarks
Mentioned in ?
References in periodicals archive ?
His novel The Middle of the Journey is based on the Alger Hiss spy affair, and while undeniably subtle and intelligent, the book comes off as cool and detached.
The Beginning of the Journey: The Marriage of Lionel and Diana Trilling
In addition, the UN's reputation suffered dramatically following public disclosure of the Communist background and affiliations of the body's most important architect, traitor and Soviet spy Alger Hiss, and scores of other U.S.
World government, take three: those who wish to empower a global institution with the authority to govern all people and countries have suffered repeated setbacks, but they are forging ahead
If you are looking for a piece of new evidence that will finally vindicate or convict Alger Hiss with certainty, you won't find it in Tony Hiss's poignant father-son memoir, A View From Alger's Window.
A Son's Own Story
Similarly, at least part of the Alger Hiss case grew out of Hoover's wars against the State Department for control of loyalty investigations, which still today supply much of the FBI manpower, as well as the choicest political gossip gleaned from questioning the neighbors, lovers, and grade-school teachers of any potential federal employee of note.
Hoover damned; exposing the ultimate G-man - and finding the ultimate bureaucrat
The Charter was carried to Washington from the UN's San Francisco founding conference by State Department official Alger Hiss, who had contributed mightily to creating it and who was later shown to have been a traitorous agent of the Soviet Union.
U.S. defenders or UN enforcers? The U.S. military is currently being used as the enforcement arm of the United Nations. America's Armed Forces must be restored to their only proper role: national defense
More than fifty years after Richard Nixon appeared before the federal grand jury that ultimately indicted Alger Hiss for perjury, the Justice Department has released 4,200 pages of the previously secret proceedings of that jury.
THE HISS GRAND JURY
Alas, my position in the hierarchy did not bring me even remotely in touch with Alger Hiss, Lee Pressman, or Jerome Frank, to whose views I would have been dangerously vulnerable had opportunity allowed.
Harry Hopkins, ally of the poor and defender of democracy
This sort of research is not the kind that inspires confidence within the scholarly community (especially given Weinstein's refusal to let other historians see the material he collected for an earlier book on Alger Hiss).
The Spies Who Loved Us?
The Hoover of the Palmer Raids sought to cauterize the nation against alien threats, and so did the Hoover who hounded Marcus Garvey out of the country in the 1920s, who chased Ma Barker and Pretty Boy Floyd, Alger Hiss, the Rosenbergs, Martin Luther King, the hippies, Black Panthers, and SDS.
Secrecy and power: the life of J. Edgar Hoover
Alger Hiss first appears in the book on the sixth page of chapter one.
SECRECY: The American Experience
He began by whipping Alger Hiss. AlthoughHiss had had his own tortured beginnings in Baltimore (his father slit his throat when Alger was three), by the time he appeared before the House Un-American Activities Committee (HUAC) in 1948 he was an advertisement for Eastern Establishment.
Why we liked Dick
Republican Richard Nixon's minor role in exposing Alger Hiss wins Coulter's praise as the sole reason for the highly placed Communist's eventual conviction.
Treason misses the mark: in Treason, Ann Coulter fires both barrels at stupid liberals and inept Democrats, but, like a poor marksman, she keeps missing the real target: a deeply entrenched conspiracy