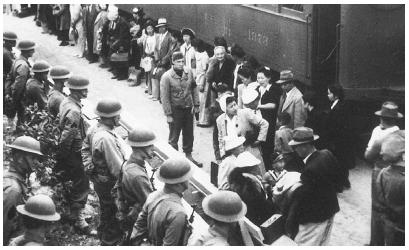 During World War II, the U.S. government moved thousands of Japanese Americans to detention camps because it considered them alien enemies while the country was at war with Japan.

In International Law, a foreign born citizen or subject of a nation or power that is hostile to the United States.

An alien enemy is an individual who, due to permanent or temporary allegiance to a hostile power, is regarded as an enemy in wartime. Under federal law, an alien enemy is a native, citizen, or subject of a foreign nation, state, or sovereign with which the United States is at war. Such a person is considered an alien enemy as long as the United States remains at war as determined through proclamation by the president or resolution by Congress. 8 C.F.R. § 331.1 (2002). During times of declared war, Congress has permitted the president to order the apprehension, restraint, and deportation of alien enemies. 50 U.S.C.A. § 21 (2003).

The term alien enemy, as it is defined by federal law, does apply easily to individuals who belong to organizations that are not affiliated with a foreign sovereign. Nevertheless, the treatment of such Aliens mirrors treatment permitted by federal law for aliens who are citizens of foreign nations. In the wake of the September 11th Attacks, Congress passed the Authorization for the Use of Military Force Joint Resolution, Pub. L. No. 107-40, 115 Stat. 224, permitting the president to use force to detain and try non-citizens in the War on Terrorism. On November 13, 2001, President george w. bush issued a military order [66 Fed. Reg. 57,831–57,836 (2001)] setting forth the military's policy for the treatment of non-citizens in the war against Terrorism. The order applies to individuals who are or were members of the terrorist organization al Qaeda; have engaged in, aided or abetted, or conspired to commit acts of international terrorism; or has harbored such a non-citizen.

Feedback
Flashcards & Bookmarks ?
Please log in or register to use Flashcards and Bookmarks. You can also log in with
Flashcards ?
My bookmarks ?
+ Add current page to bookmarks
Mentioned in ?
References in periodicals archive ?
on the Crown's prerogatives, wrote that "[I]f an alien enemy
DUE PROCESS OF WAR
The Alien Enemy Control Unit, created soon after in the Department of Justice, ran Crystal City and operated branches in each federal judicial district, where Alien Enemy Hearing Boards determined who would be interned.
America's other World War II Internment Camps: the legacy of the German and Japanese prisoners held hostage
The executive branch asserted that the authorization permits detention without trial of persons arrested in the United States on suspicion of Al Qaeda related terrorism, which it regarded as bolstered by the Supreme Court's Hamdi decision finding the detention of enemy combatants captured in Afghanistan to be authorized as "a fundamental incident of waging war." (80) While there is limited authority to support military trials of enemy soldiers captured within the United States, in previous wars the Alien Enemy Act would likely have been the chief means of interning suspected enemies domestically.
Declarations of war and authorizations for the use of military force: historical background and legal implications
"Alien enemy has taken advantage of the internal rift of Afghans and the time has come for the latter to learn a lesson from the bitter experiences of the past and reach an understanding," Mutasim said in a statement.
Taliban leader warns of civil war in Afghanistan post-2014
Both of them face an alien enemy ruthless and unknown - and both of them also will face impossible choices in their struggle for survival, documented in a gripping saga impossible to put down and recommended for any science fiction collection.
The Fantasy/Scifi Shelf
Before long, both cowboys and American indians have joined forces to tackle the alien enemy excavating gold from the nearby mountains.
Danny get your gun; Cowboy CraIg aS E.T. goES oUT wEST
He is now keen to promote this as the first film in which he plays a villain, although his character and Daniel's come together to fight the common alien enemy who want to exterminate all life on the planet.
I'M STILL IN WITH A SHOT; Harrison Ford is pushing 70 but he says there's no chance he'll quit HOLLYWOOD LEGEND KEEPS HIMSELF BUSY TO AVOID DOING 'A REAL JOB'
The question as to how an alien enemy operative with no apparent
A question of allegiance: choosing between dueling versions of "aiding the enemy" during war crimes prosecution
We visited our local takeaway as it was hungry work visiting the various planets and fighting the alien enemy through the Milky Way.
Screen dream; The Williams head to Theatr Twm o''r Nant
In the same way that Batman Begins turned back the clock on the dark knight's life and times, the action here begins as we meet Captain Kirk's dad at the helm of a ship going into battle with a giant alien enemy.
EAR WE BOLDLY GO; MOVIES
Jefferson Davis, having no use for him, turned him over to North Carolina troops to be guarded as an "alien enemy." The Confederacy subsequently further banished him to Canada.
Setting Lincoln record straight
Restoring Habeas Corpus for Suspected Alien Enemy Combatants
Restoring rights: Rep. Ron Paul introduces legislation to protect basic rights like habeas corpus, to prohibit torture, and to ban arbitrary kidnapping and imprisonment by the executive branch