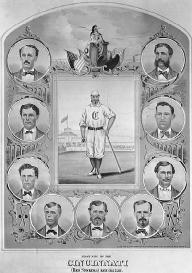 With a payroll of approximately 11,000 dollars, the 1869 Cincinnati Red Stockings were the first professional baseball team.

Although certain laws have protected citizens from various forms of monopolistic practices for decades, the legal decisions surrounding "America's favorite pastime" have allowed it to remain exempt from most forms of government intervention. Through the years, Major League Baseball (MLB) has escaped measures that would have ended its exclusive control over contracts and copyrights and its all-around Monopoly on professional U.S. baseball. Meanwhile, as contracts and team expenditures have come to run well into the millions of dollars, many have come to see baseball as less of a sport than a business—and a business that should be regulated. The United States still reveres baseball, but fans, players, and owners all hope that government decisions will save it from labor strikes and a host of other ills. The government, however, continues to do little other than let baseball remain a special, nationally protected institution.

The professional growth of baseball—and some of its headaches—followed a natural economic progression. Much of the sport's origin is shrouded in myth, but it is thought that it got off to its humble start sometime in the nineteenth century. The first organized contest probably happened on June 19, 1846, between two amateur teams: the New York Nine and the Knickerbockers. In 1869, the Cincinnati Red Stockings, a professional team, paved the way for other franchises to come into existence. In 1871, the National Association of Professional Baseball Players was born. The ensuing days belong to popular remembrance. Abner Doubleday formed the National League in 1876, and baseball has existed somewhere between game and profitable enterprise ever since.

From its early days, the courts have failed to see baseball as posing a threat to the laws of business. The monumental sherman anti-trust act of 1890 (15 U.S.C.A. § 1 et seq.)—a statute prohibiting monopolies—forbids undue restraint of trade on commerce between states. In 1920, an appeals court ruled that the fact that baseball operates on an interstate level was part of its unobjectionable nature as a sport (National League of Professional Baseball Clubs v. Federal Baseball Club of Baltimore, 50 App. D.C. 165, 269 F. 681). It stated, in general reference to other forms of trade and commerce, that "the Sherman Anti-Trust Act … does not apply, unless the effect of the act complained of on interstate commerce is direct, not merely indirect or incidental." Baseball, the court found, did not pose a threat to the economy of the world of sports.

The National League case stemmed from allegations made by the Federal League's Baltimore Terrapins. In the early 1900s, the struggling Federal League had sought to become a venture of the major leagues and had competed with other major league franchises. But the National and American Leagues bought out many of the Federal teams, sometimes player by player, with offers they could not refuse. The Terrapins, one of the last surviving vestiges of the Federal League, sued the National League. Representatives of the Terrapins argued that MLB owners had treated the Terrapins with scorn, offering them only $50,000 in settlement for damages incurred by the buyouts. In court, the Terrapins argued that MLB had violated antitrust laws and had participated in monopolizing ventures.

The case made it all the way to the U.S. Supreme Court (National League, 259 U.S. 200, 42 S. Ct. 465, 66 L. Ed. 898 [1922]). In 1922, the Court made a classic decision. In an opinion written by Justice oliver wendell holmes jr., the Supreme Court declared baseball to be, first and foremost, a sport and not a business. In Holmes's words, baseball activities were "purely state affairs." The decision gave baseball the unique status of being the only official professional sports organization to be exempt from antimonopoly laws. In effect, the decision protected baseball as a national treasure.

The National League decision was reaffirmed in 1953 with Toolson v. New York Yankees, 346U.S. 356, 74 S. Ct. 78, 98 L. Ed. 64. In a brief statement, the Court ruled against the plaintiff, minor league player George Toolson. Toolson's arguments were based on the complaint that baseball was a monopoly that offered him unfair contract deals. The Court said Congress alone had been given the right to exercise powers that could break up the structure of baseball's professional organization.

The controversial issue in Toolson was baseball's reserve clause. This clause stood as the earliest symbol of the sport's underlying business nature. It stated that once a player had accepted a contract to play for a certain team, the player was bound to serve that team for one year and must enter into a new contract with the same team "for the succeeding season at a salary to be determined by the parties to such contract." It was agreed that if a player violated the reserve clause, the athlete would be guilty of "contract jumping" and would be ineligible to serve in any club of the leagues until formally reinstated.

The reserve clause guaranteed players little more than an income. Players attacked it. In the 1970s, Curtis C. Flood, center fielder for the St. Louis Cardinals, brought charges against Bowie K. Kuhn, acting commissioner of baseball. The issue was a player's Free Agency, which Flood had requested and Kuhn had denied. Free agency is the freedom to negotiate a contract with any team, basically a release from the reserve clause. Taking his case to the Supreme Court, Flood argued that the reserve clause unfairly prevented him from striking deals with other teams that would pay him more for his services. The Supreme Court decided on June 19, 1972, that it did not have the authority to act (Flood v. Kuhn, 407 U.S. 258, 92 S. Ct. 2099, 32 L. Ed. 2d 728). Only baseball's acting commissioner could designate free agency.

Player discontent, as a reaction to the decision, set the stage for more free agency bids, and Arbitration between players and owners began in 1973. In January 1976, Andy Messersmith's success in obtaining free agency ushered in a new era of high stakes: players could now dictate certain terms of employment, and hence came the dawn of multimillion-dollar contracts.

Money was also at issue in a case related to another aspect of the game. After more than a century of professional play, in 1986, televised broadcasts of baseball and the Copyright laws surrounding them came into question. Players felt that the terms of their employment did not include their performances for television audiences. They insisted that the telecasts and the profits being derived from them were being made without their consent. In Baltimore Orioles v. Major League Baseball Players Ass'n, 805F.2d 663 (7th Cir. 1986), major league clubs sought a Declaratory Judgment that they possessed an exclusive right to broadcast games. The major league players argued that their performances were not copyrightable works because they lacked sufficient artistic merit. Refusing to cut into the control of MLB over the airwaves, the federal appellate court ruled that the telecasts were indeed copyrightable works and that clubs were entitled to the revenues derived from them.

Throughout these cases, decisions about the economy of baseball have been left to the players and owners. For this reason, baseball has been referred to as an anomaly in relation to the nation's antitrust laws, and its exemption has been called "an aberration confined to baseball" (Flood). The push for congressional action to eliminate this exemption reached a fever pitch with the baseball players' strike of 1994–95. The strike left many in baseball, including fans, disenfranchised. Senator Howard M. Metzenbaum, an Ohio Democrat who headed the subcommittee on antitrust laws, led the fight to remove the antitrust exemption from baseball. However, the 234-day strike ended in an agreement between owners and players, in which owners promised to pay "luxury taxes" on clubs with high payrolls. Congress was spared the necessity of acting.

Local communities, however, faced the possibility of losing their MLB franchises as the economics of baseball changed dramatically in the late 1990s. Major market teams, many of them now owned by corporations rather than wealthy individuals, drove up player payrolls. This hurt smaller market teams and teams owned by individuals who either lacked resources or the desire to match salaries. The Minnesota Twins, unable to secure a new, publicly funded baseball stadium, threatened to move to another state in 1997. The state of Minnesota sought unsuccessfully to probe the team's finances and that of MLB, but in the end the Twins could not secure a sale or move of the team.

The Montreal Expos and the Minnesota Twins were rumored to be the teams selected for contraction. In Minnesota, the operators of the Metrodome, where the Twins play their home games, sued the Twins and MLB, asking a state court to order the Twins to play the 2002 season. They sought to either win on the merits or delay contraction for a year. The judge issued a preliminary injunction and the Twins appealed, arguing that they did have an obligation to pay the rent for the season, but they could choose whether or not to play the season. The Minnesota Court of Appeals, in Metropolitan Sports Facilities Commission v. Minnesota Twins Partnership, 638 N.W.2d 214 (2002), upheld the Injunction, which meant that contraction became impossible for the 2002 season. The baseball league later abandoned the concept of contraction, at least for the near future.