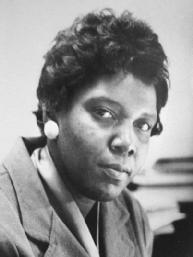 Barbara Charline Jordan, attorney, legislator, and educator, was the first African-American woman from a Southern state to win election to the U.S. Congress.

Jordan was born on February 21, 1936, in Houston, Texas, the third and youngest daughter of the Reverend Benjamin Jordan and Arlyne Jordan. In 1952, she graduated at the top of her class from Phyllis Wheatley High School and enrolled in Texas Southern University (TSU), an all-black college, where she joined the debate team and traveled to competitions throughout the United States. The team was restricted to blacks-only motels and restaurants in many of the states bordering Texas.

Jordan was also drawn to politics. She became involved in the 1960 presidential campaign and went to work for john f. kennedy and for fellow Texan lyndon b. johnson, both Democratic Party nominees. In 1962 she made her first unsuccessful bid for a seat in the Texas House of Representatives, running from Harris County. She ran again in 1964, and again was defeated. Jordan decided to make a third attempt at winning public office and in 1966 she was elected to the Texas Senate. She was the first black state senator elected in Texas since 1883.

"What people want is very simple. They want an America as good as its promise."
—Barbara Jordan

Shortly after her election, Jordan was invited to the White House by President Johnson to discuss his upcoming Civil Rights legislation. In 1972 she was elected to the U.S. House of Representatives, becoming the first black woman from a Southern state to serve in Congress. She immediately enlisted former president Johnson's assistance in winning an appointment to the House Judiciary Committee, where she gained national recognition for her remarks at the Impeachment proceedings against President richard nixon. Jordan gained additional prominence in July 1976 when she gave a keynote address at the Democratic National Convention. Her speech about the Democratic Party and the meaning of democracy in the United States brought her a standing ovation. A movement to put Jordan on the ticket as vice president gained tremendous support, but Jordan held a press conference to announce that she did not wish to be nominated.

Jordan served three terms in the House of Representatives and sponsored landmark legislation to expand the voting rights act,42 U.S.C.A. § 1973 et seq., to require printing of bilingual ballots, and to toughen enforcement of civil rights laws. She resigned from Congress in 1972 and became a professor at the Lyndon Baines Johnson School of Public Affairs at the University of Texas at Austin. In 1982, she was appointed to the university's Lyndon B. Johnson Centennial Chair in National Policy, where she taught courses on ethics and national policy issues.

In December 1990, Texas Governor Ann W. Richards appointed Jordan as a special adviser to her administration on ethics in government. Richards had made ethics a primary focus of her campaign, and she asked Jordan to author ethics legislation and work with gubernatorial appointees on guidelines for ethical behavior in their public service.