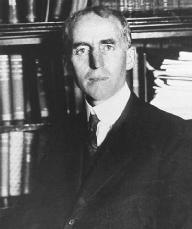 Few academicians achieve the public recognition and professional respect accorded to historian Charles Austin Beard. His polemic An Economic Interpretation of the Constitution of the United States stirred debate among fellow scholars and the U.S. public by contradicting the popular understanding of how and why the United States was founded. A brilliant, original thinker, Beard achieved a unique prominence among twentieth-century historians and political scientists.

Beard was born to well-to-do parents in Knightstown, Indiana, on November 27, 1874. After graduating from Indiana's DePauw University in 1898, he sailed to England to attend the University of Oxford. While at Oxford, he helped establish Ruskin Hall, a college for British working men that represented to Beard the liberation of the English masses from upperclass domination. In Beard's mind, Ruskin Hall was a symbol and precursor of the true political democracy that would be ushered in by the industrial revolution.

In 1900 Beard returned briefly to the United States to marry Mary Ritter. An intellectual in her own right, Mary Ritter Beard became an invaluable critic and collaborator in the more than fifty books produced during Beard's prolific career. After his marriage, Beard resumed his studies in England, then returned permanently to the United States. He earned his doctor's degree from New York City's Columbia University and in 1904 accepted a teaching position in political science at Columbia.

In 1913, Beard published An Economic Interpretation of the Constitution of the United States. The book created a mild sensation because it suggested that the United States was not yet a true democracy. Even more disturbing to some U.S. citizens was Beard's argument that the U.S. Constitution was designed primarily to protect the property rights of the wealthy capitalists attending the Constitutional Convention. He insisted that self-interest, not democratic principles, motivated the Founding Fathers. To Beard, the Constitution was a tribute to the power of class, not democracy.

Although several U.S. politicians criticized Beard's unorthodox view of U.S. history, many of his colleagues praised his innovative approach. They understood how the private economic interests of the colonial ruling class could have had a far-reaching effect on the nascent U.S. government.

In 1917 Beard protested the firing of several Columbia University faculty members by resigning his own position. Beard had been outraged when the university dismissed his colleagues for their refusal to support the United States' involvement in World War I. In 1919 he helped found the New School for Social Research in New York City.

In 1927 Beard produced another remarkable tome, The Rise of American Civilization. Coauthored by his wife, it provided an overview of U.S. history with further insights into the government's origins. This sprawling, two-volume set was followed by America in Midpassage, in 1939, and The American Spirit, in 1942.

During the early 1930s, Beard wrote extensively about the nature of historical knowledge. He was particularly interested in historians' personal biases and the effect of those biases on the presentation of historical facts. Although Beard was closely associated with the U.S. progressive movement and social reforms, he disagreed with several aspects of franklin d. roosevelt's New Deal programs. In 1934 he began an acrimonious, decade-long campaign against Roosevelt's foreign policy. In American Foreign Policy in the Making, 1932–1940 (1946) and President Roosevelt and the Coming of War (1948), Beard maintained that the United States had backed Japan into a corner and had forced the country into a war. His extreme isolationist views damaged his professional reputation to some extent.

Beard died in 1948, at the age of seventy-three. He is remembered as an accomplished historian who influenced the way U.S. citizens view their own history.