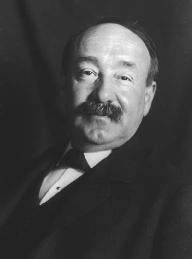 Charles Joseph Bonaparte, who served as U.S. attorney general under president Theodore Roosevelt, was one of the organizers of the Civic Reform League and the National Municipal League, and he helped to found a Special Agents Force within the Justice Department that was the forerunner of the Federal Bureau of Investigation (FBI).

A grandson of Jerome Bonaparte, who was Napoleon's youngest brother, Charles Joseph Bonaparte was born in Baltimore, Maryland, on July 9, 1851. After graduating from Harvard College in 1871, he attended Harvard Law School, graduating in 1874. Bonaparte returned to Baltimore and established a private practice. At the time, public corruption of elected officials was widespread in the United States and the political situation in Maryland was considered to be the worst in the country. Bonaparte, of Italian-American descent, became interested in civic reform, commenting in an article published in Forum magazine that the politicians of that period if not technically criminals themselves, were the "allies and patrons of habitual lawbreakers."

In 1881, Bonaparte became one of the founders of the National Civil Service Reform League. Along with other political reformers he sought to raise the awareness of the electorate regarding crimes such as Bribery and Undue Influence and the need for fair and impartial administration of the government. The reformers were known in the popular parlance as "googoos" because they sought good government. Bonaparte also helped to found the National Municipal League in 1894. The organization, an amalgamation of various citywide reform groups throughout the United States, elected Bonaparte its president in 1905.

"To have a popular government we must, first of all, and before all else, have good citizens."
—Charles Joseph Bonaparte

Bonaparte was a member of the Republican Party although not a particularly active one. In 1892, Bonaparte and Theodore Roosevelt met in Baltimore when they both spoke to a local civil service reform organization. In 1902, President Roosevelt appointed Bonaparte to the Board of Indian Commissioners. In 1905, Roosevelt named Bonaparte secretary of the United States Navy.

In his second term of office, Roosevelt found it necessary to name a replacement for Attorney General William Henry Moody, who left in December 1906 to become an associate justice on the U. S. Supreme Court. Because of his reformer passions, Bonaparte was chosen by Roosevelt to be Moody's successor. Roosevelt, who had first begun his political career in New York City by campaigning for municipal reform, was now seeking reform on a national basis by going after corrupt businesses and corporations that had formed "trusts" aimed at stifling competition and keeping wages low. Roosevelt had become the nation's "trust-buster," and Bonaparte joined the pursuit, launching antitrust investigations aimed at corporations such as Standard Oil and the American Tobacco Company, and railroads including the Union Pacific. During his tenure in office, Bonaparte argued over 50 cases before the Supreme Court.

In 1908, Roosevelt directed Bonaparte to create an investigative force that would be a subdivision of the Justice Department. Before he left office, Bonaparte suggested making the division permanent. His suggestion was upheld by his successor, george wickersham, who called the group the Bureau of Investigation. The 23-member unit developed by Bonaparte was renamed the Federal Bureau of Investigation (FBI) in 1935.

After leaving office in March 1909, Bonaparte continued to pursue his advocacy of civil reform. He died on June 28, 1921, at his estate, Bella Vista, located outside Baltimore.