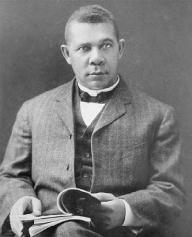 Booker Taliaferro Washington was born into Slavery, but grew up to become one of the nation's most prominent leaders and educators. While various groups both supported and opposed his views, no one denied that Washington's accomplishments were notable. He remained, until his death, an influential proponent of race relations and African American self-sufficiency. Booker Taliaferro was born on April 5, 1856, in Franklin County, Virginia. His mother was a slave; his father a white man whose identity remains unknown. When Booker was a child, his mother married a slave named Washington Ferguson. Booker took his stepfather's first name and became known as Booker T. Washington. After the U.S. Civil War ended, Washington and his family moved to Malden, West Virginia. At age nine, Washington began work in the local salt mines. He then labored as a coal miner before going to work as a houseboy for the wife of Lewis Ruffner, the mine owner, while attending a poorly equipped school that could only give him the bare rudiments of an education.

"I have learned that success is to be measured not so much by the position that one has reached in life as by the obstacles which he has overcome while trying to succeed."
—Booker T. Washington

Possessed of a quick and lively intelligence, Washington was fascinated by the books he saw at the Ruffners' house and, with Mrs. Ruffner's encouragement, became determined to get a higher education. When Washington was 16, he made a long trek on foot to attend the Hampton Agricultural Institute in Virginia. The institute had been founded in 1868 by Samuel Armstrong, a former Union Army general who had led African-American troops during the Civil War. Armstrong believed strongly that freed slaves must be educated but also must learn to provide for themselves by receiving training in manual skills. An ardent proponent of the virtues of good hygiene and strong morals as well as self-discipline, Armstrong became a mentor to Washington.Washington graduated from Hampton Institute in 1875 and returned to Malden where he worked as a teacher. Washington later taught at Hampton. When a new school, the Tuskegee Negro Normal Institute, was opened in Alabama on July 4, 1881, Washington, on Armstrong's recommendation, was placed in charge of it. Following the Hampton Institute model, Tuskegee Institute had an academic regimen but placed an emphasis on learning such practical trades as farming, carpentry, brickmaking, shoemaking, and printing.

Washington traveled the country to raise funds for his school, speaking to both whites and African Americans. His speeches eventually began to earn him a national reputation. In 1895, Washington spoke at the opening of the Cotton States Exposition in Atlanta, Georgia. In that speech Washington emphasized the need for African Americans to become economically self-sufficient before pressing for political rights. Washington's speech, called the "Atlanta Compromise," was well-received by numerous politicians and white citizens in the South who were proponents of Jim Crow Laws, legislation which mandated Segregation and political disenfranchisement.

Washington's conservative views were denounced by W. E. B. DuBois and other African American, as well as white, leaders who felt that Civil Rights could not be compromised and that Washington's emphasis on a vocational education was an affront to those who wished to become professionals. Opposition to Washington's views helped to create the Niagara Movement, which was started in 1905 and served as the forerunner of the National Association for the Advancement of Colored People (NAACP), established in 1909.

Undaunted by criticism from both liberals and conservatives, Washington continued to write, lecture, and disseminate his personal philosophy of non-agitation. In addition, his influence expanded. He served as advisor to Presidents Theodore Roosevelt and William Howard Taft, on the subject of political appointments of African Americans and issues concerning race relations. He also was instrumental in securing funds for African-American institutions from such millionaire industrial leaders as Andrew Carnegie and John D. Rockefeller.

When Washington died in New York City on November 14, 1915, Tuskegee Institute had more than 1,500 students enrolled, and approximately two hundred faculty members. Its endowment was larger than that of any other African American institution. Washington was able to add a considerable amount to Tuskegee funds through the sale of his popular and groundbreaking autobiography, Up From Slavery, which was published in 1901.

Booker T. Washington was both praised and reviled for practicing the "politics of accommodation." To some he was a hero who advocated for moral development and economic self-reliance for African Americans who had to forge a life after being freed from the bonds of slavery. To others he was supportive of segregation and a compatriot of whites who attempted to suppress equal rights for African Americans. Regardless of these views, Washington was a pivotal figure in American race relations after the Civil War.