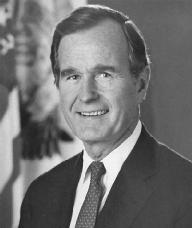 George Herbert Walker Bush capped a full and distinguished political career with his election in 1988 as President of the United States. Bush became the forty-first chief executive after serving for eight years as the nation's vice president under ronald reagan. The most memorable events of his one-term presidency were the Desert Shield and Desert Storm Operations in the Persian Gulf in 1991.

Although Bush was enormously popular in the aftermath of the Persian Gulf War, his standing with the U.S. public plummeted as domestic problems and a sour economy took their toll. In 1992, Bush lost the presidential election to Democratic challenger bill clinton, the governor of Arkansas. Clinton's campaign offered a promise of change and a "new covenant" between citizens and government.

Born June 12, 1924, in Milton, Massachusetts, Bush was the son of Prescott Sheldon Bush, an international banker and U.S. senator from Connecticut, and Dorothy Walker Bush, the daughter of a wealthy St. Louis businessman. Both parents had a tremendous influence on Bush, who was unpretentious and hardworking despite his privileged background.

As a young boy, Bush attended Greenwich Country Day School, in Greenwich, Connecticut, and Phillips Academy, an elite prep school in Andover, Massachusetts. At Andover, Bush excelled academically and athletically. Nicknamed Poppy after his grandfather Walker, Bush was a popular student, serving as class president and captain of the basketball and soccer teams.

"A free economy demands engagement in the economic mainstream. Isolation and protectionism doom [their] practitioners to degradation and want."
—George H.W. Bush

When World War II broke out, Bush was determined to see military action. On June 12, 1942, shortly after graduation from Andover, he enlisted in the U.S. Navy. At the age of 20, he became the youngest commissioned pilot in Navy history. Bush was stationed in the Pacific theater and flew dozens of dangerous missions. On September 2, 1944, while Bush was assigned to the USS Jacinto, his plane was shot down near a Japanese island. Bush bailed out of the aircraft and was rescued at sea; his crewmen did not survive.

Bush returned to the United States after his tour of duty and entered Yale University, in New Haven, Connecticut. Not surprisingly, Bush had an outstanding college career. He played varsity baseball, was inducted into the Skull and Crossbones secret society, and in 1948 graduated Phi Beta Kappa with a degree in economics.

Before entering Yale in 1945, Bush married Barbara Pierce, the daughter of the publisher of McCall's and Redbook. Their first child, future President George Walker Bush, was born during Bush's senior year of college. The couple eventually had six children, including John (Jeb), Neil, Marvin, and Dorothy. Their second child, Robin, died of leukemia in 1953.

After graduating from Yale, Bush and his young family headed for Texas, determined to make their fortune in the oil business. In 1951, Bush started Bush-Overby Oil Development Company, and in 1954, he created Zapata Offshore Company, which designed and built offshore drilling platforms.

Bush's success in the oil business kindled his political ambitions. In 1964, Bush entered the race for U.S. senator from Texas but lost to Democrat Ralph Yarborough. Two years later, Bush made it to Washington, D.C., as a member of the U.S. House of Representatives from the Seventh District of Texas. Reelected to the House in 1968, Bush was a member of the influential House Ways and Means Committee. In 1970, he again ran for the Texas Senate seat, this time losing to Democrat Lloyd Bentsen.

Despite his defeat Bush's career in public service was far from over. During the 1970s he held a wide range of appointive posts and built up an impressive résumé. From 1971 to 1973 Bush served as the U.S. ambassador to the United Nations. In 1974 he was the chair of the Republican National Committee. In 1974 and 1975 Bush traveled to the People's Republic of China as the U.S. liaison officer. And from 1976 to 1977 he was the head of the Central Intelligence Agency.

Confident in his experience and abilities, Bush announced his intention to run for president. From 1977 to 1980 he actively campaigned for the Republican nomination. Although he lost the 1980 GOP nod to Reagan, the conservative governor of California, Bush was chosen by Reagan as his vice presidential candidate. The Reagan-Bush ticket reached the White House easily in 1980, defeating incumbent president jimmy carter and vice president Walter F. Mondale.

Bush was a late convert to Reagan's conservatism. As a U.S. representative in the 1960s Bush had been a political moderate, voting in favor of open housing, the abolishment of the military draft, and the vote for 18-year-olds. As vice president under Reagan, Bush became more conservative.

Bush was a loyal vice president and basked in the reflected glory of Reagan, a popular president. When Reagan and Bush ran again in 1984, they won in a landslide victory against Democratic candidate Mondale and his running mate, geraldine ferraro.

In 1988 the Republican Party rewarded Bush for his loyal service as vice president. Despite an early defeat in the Iowa caucuses, Bush won the GOP nomination for president. To the surprise of many, Bush chose Dan Quayle, a relatively unknown and inexperienced senator from Indiana, as his running mate. The choice puzzled many political experts who felt that Quayle's credentials were meager.

Bush and Quayle ran against Governor Michael Dukakis of Massachusetts and Bush's old nemesis from Texas, Senator Bentsen. During the campaign Bush resorted to some tactics that seemed out of keeping with his congenial personality. One Bush TV commercial focused on Willie Horton, an African American felon who committed additional crimes upon his release from prison in Massachusetts. Suggesting that Dukakis was soft on crime, the ad capitalized on racial fears and prejudice. Also, despite the soaring deficit, Bush promised to give U.S. citizens a financial break, in the campaign pledge, "Read My Lips: No New Taxes." After the election Bush's pledge came back to haunt him: once in office, he agreed to tax increases to combat a $140 billion budget deficit.

Bush and Quayle captured the vote in 40 states to win the 1988 election. At his inauguration Bush made an appeal for a "kinder, gentler nation" and shared his vision of volunteers, like "a thousand points of light," helping to solve problems.

The height of Bush's popularity came during Operation Desert Storm, a six-week display of technological warfare against Sadam Hussein in Kuwait and Iraq.

In 1992 Bush and Quayle squared off against Democratic challengers Clinton and al gore, a senator from Tennessee. The GOP incumbents won their party's endorsement after a bruising primary fight with conservative columnist patrick buchanan. Independent candidate H. Ross Perot, a Texas multimillionaire businessman, also threw his hat into the ring, to further muddle the election scene. Despite Clinton's liabilities—rumors of infidelity, avoidance of the draft, and a "slick" image—Clinton was able to defeat Bush.

Commentators often argue over the reasons one politician wins or loses, but many agree that a sluggish economy and Bush's broken promise of no new taxes hurt his chances for reelection. Clinton and Gore, a generation younger than Bush, won the election with a promise of change and new beginnings.

Bush reentered the public consciousness as two of his sons pursued their own political careers. George W. Bush was elected governor of the state of Texas in 1995, a position he held until 2000. Younger son Jeb Bush served as governor of the state of Florida in 1998. George W. Bush ran for president in 2000 against then-Vice-President Al Gore in one of the most hotly contested races in U.S. history. The younger Bush's running mate was Richard B. (Dick) Cheney, who had served as secretary of defense under the elder Bush.

Although George H.W. Bush remained in the background of the 2000 presidential election, several of George W. Bush's advisors had ties to his father. For several weeks following the election, the country focused much of its attention on the election returns in the state of Florida. James A. Baker III, the former Secretary of State under the elder Bush, served as an advisor and spokesperson for the younger Bush during the controversy. When George W. Bush assembled his cabinet after the election results had been resolved, several names tied to the elder Bush were nominated for positions. The most notable of these officials, Colin L. Powell, former chairman of the Joint Chiefs of Staff, was eventually nominated and sworn in as the secretary of state.

George H.W. Bush and George W. Bush are the first father and son to serve as presidents of the United States since John Adams (1797–1801) and John Quincy Adams (1825–29). The elder Bush has largely remained in the background of his son's presidency. Naturally, the American press focused considerable attention on him during his son's candidacy and eventual election. Bush's policies while he was in office also came into question once again because many viewed the election in 2000 as a repeat of the election between George H.W. Bush and Clinton in 1992. Several commentators agree that a sluggish economy and Bush's broken promise of no new taxes hurt his chances for reelection, and many have compared the policies of father and son as the economy slowed under the younger Bush.

The George Bush Presidential Library and Museum is located in College Station, Texas, on the campus of Texas A&M University. In addition to several speaking engagements, Bush and his wife divide their time between Texas and Kennebunkport, Maine, spending time with their children and 14 grandchildren.