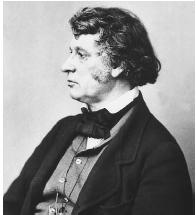 Charles Sumner served as U.S. senator from Massachusetts for 23 years starting in 1851. His career in the Senate was a turbulent one, marked by much controversy.

After his Admission to the Bar in 1834, Sumner traveled through Europe from 1837 to 1840 to analyze foreign judicial systems. When he returned to the United States, he became interested in reform issues and emerged as a reform leader and an abolitionist. He was instrumental in the development of the Free-Soil Party in 1848 and endorsed Martin Van Buren, the candidate of that party, in the presidential election of 1848.

Sumner staunchly opposed Slavery and advocated the revocation of the Fugitive Slave Act of 1850 (9 Stat. 462). He vehemently attacked the Kansas-Nebraska Bill of 1854 (10 Stat. 277), which allowed residents of new territories to determine the slavery issue for their areas. In 1856, in a speech known as "The Crime Against Kansas," Sumner attacked stephen a. douglas, the originator of the bill, and South Carolina senator Andrew Pickens Butler, who strongly supported slavery. After the scathing oration, Sumner was beaten with a cane by Representative Preston Smith Brooks, who was related to Senator Butler. The injuries Sumner sustained prevented him from actively participating in senatorial affairs for the next three years.

In 1861 Sumner became the presiding officer of the Senate Committee on Foreign Relations. He held that position until 1871, when his radical behavior resulted in his removal from that office.

During the Reconstruction period, Sumner was a member of the radical Republican faction. He opposed President Andrew Johnson's conservative policy toward the South and advocated a policy that would allow freed men to own land that was previously a part of their owner's estates. Sumner also believed that the state legislatures should control the school system, and that all races should be allowed to attend public schools. Sumner and Johnson were often at odds over their conflicting policies, and Sumner supported the Impeachment of the president in 1868.

Sumner did not fare any better with the new administration of President ulysses s. grant. He opposed Grant's policy to annex Santo Domingo and demanded large reparations from Great Britain because that country had aided the Confederacy during the Civil War by supplying ships. Secretary of State Hamilton Fish spoke against Sumner's policy toward the British, saying that it interfered with current relations with that country. In 1871 Sumner was asked to leave his post as chairman of the Foreign Relations Committee, but he remained in the Senate until his death March 11, 1874, in Washington, D.C.

Feedback
Flashcards & Bookmarks ?
Please log in or register to use Flashcards and Bookmarks. You can also log in with
Flashcards ?
My bookmarks ?
+ Add current page to bookmarks
Mentioned in ?
References in periodicals archive ?
On June 1, 1865, Senator Charles Sumner referred to the most famous speech ever given by President Lincoln.
Giant Lincoln sculpture coming to Springfield Sculpture arrives this week, will be displayed at Abraham Lincoln Presidential Library and Museum
Only one of these was known to the public, the 1856 caning on the Senate floor in the presence of many witnesses of the fervent abolitionist Senator Charles Sumner of Massachusetts by South Carolina Democratic Representative Preston Brooks.
The wages of censorship
Earlier in the summer, Mefford was in Nashville to celebrate the 90th birthday of Charles Sumner, a longtime AU activist and chapter leader.
Americans United In ACTION! Staff Members, Interns And Volunteers Work To Defend Church-State Separation
Blume (1875-1971), fellow-Romanists, the classics and Roman Law in the Gilded Age; Roman law in early 20th-century America; Charles Sumner Lobingier (1866-1956) and Charles Phineas Sherman (1874-1962): careers, scholarship, and translations; Samuel P.
Lost in Translations: Roman Law scholarship and Translation in Early Twentieth-Century America
And why would Grant feud with leading political abolitionists like Charles Sumner, chairman of the Senate Foreign Relations Committee, and James Ashley, a principal leader in the fight to pass the constitutional amendment abolishing slavery, or so readily abandon the cause of black civil rights during his second term, or support a move to expel black cadets from West Point?
REHABILITATING GRANT
After initial hopes that Andrew Johnson would be one of their own, radical Republicans like Benjamin Wade, Thaddeus Stevens, and Charles Sumner fiercely countered the president's conciliatory approach to the former Confederate states.
After Lincoln: How the North Won the Civil War and Lost the Peace
The album contains 44 images taken circa the 1860s, including the Tubman and Menard images, as well as a print of a more commonly known Tubman portrait taken later in life, and images of Charles Sumner, Lydia Maria Child, Samuel Ely, William Ellery Channing, Colonel C.W.
Treasures acquired: rare Tubman photo
In 1864, Lysander Spooner wrote a letter to Charles Sumner, a senator from Massachusetts and leader of the Radical Republicans, lambasting him for not openly admitting that the Constitution did not sanction slavery.
The unconstitutional constitution: Understanding post-civil war constitutional disobedience through Lysander Spooner
By publishing his No Treason pamphlets, Spooner made it clear he accepted anarchism, but it would be a mistake to overlook his letter to Charles Sumner. Sumner was among the more radical antislavery Republicans and, following his brutal beating by Preston Brooks, a hero among many abolitionists.
From abolitionist to anarchist: Lysander Spooner's radical transition through the Civil War
01WITH an irony that would only become evident less than a week later, Charles Sumner, general manager of the Cunard company called the Lusitania (pictured, below) "the safest boat on the sea" after the German Embassy declared that any vessel flying allied flags did so at their own risk.
On This Day; ...100 YEARS AGO
Charles Sumner destroyed any pretense of civility between North and South in the slavery debate.
Civil War comes alive; Reenactment kicks off Lincoln exhibit