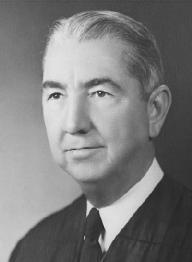 Distinguished jurist and federal law enforcement official Tom Campbell Clark played a pivotal role in U.S. law following World War II. During his three decades in the federal government, Clark served in various capacities in the department of justice (1937–45), as U.S. attorney general (1945–49), and as an associate justice of the U.S. Supreme Court (1949–67). A conservative whose political philosophy moderated in his later years, Clark took part in the Supreme Court's expansion of Civil Rights and civil liberties in the 1960s.

Clark was born in Dallas on September 23, 1899, to a life of comfort and privilege. Following high school, he attended the Virginia Military Institute and then served as a sergeant in 1917, narrowly missing overseas action in World War I. After his discharge, Clark followed his grandfather, father, and brother into the Practice of Law. He entered the University of Texas, and completed bachelor of arts and bachelor of law degrees in 1922 before joining his father and brother in their law practice. He soon married Mary Jane Ramsey, a former fellow student, with whom he later had two children.

"Nothing can destroy a government more quickly than its failure to observe its own laws, or worse, its disregard of the charter of its own existence."
—Tom Clark

Family political connections served Clark throughout his career. Help in launching his career came from two influential Texas politicians, Senator Tom Connally and Representative Sam Rayburn. With Connally's help, Clark left private practice in 1927 to become the civil district attorney of Dallas County. He had a perfect prosecution record in his five years in the office. In the early 1930s, he was active in Texas politics as well as in corporate law, and he briefly represented the Texas Petroleum Council as a lobbyist fighting tax increases.

In 1937, Clark began his long career in Washington, D.C. He joined the U.S. Department of Justice as a special assistant to the attorney general, an appointment secured through the strong political support of Senator Connally.

The job required overseeing several department bureaus and prosecuting antitrust cases, in which he distinguished himself. By 1939, he was chief of the Antitrust Division's West Coast offices, fighting and ending price-fixing in the lumber industry.

During World War II, Clark held two leading positions in the Justice Department: chief of the Antitrust Division in 1942 and chief of the Criminal Division in 1945. Wartime had transformed the federal government, multiplying responsibilities for its officers, and thus, Clark found himself assisting the U.S. Army in a controversial domestic action: he coordinated the federal effort to round up and intern in camps American citizens of Japanese ancestry residing on the West Coast. Clark also worked closely with Senator Harry S. Truman's Special Senate Committee Investigating the War Program, which unearthed cases of war Fraud for the Justice Department to prosecute.

Throughout the late 1940s, Clark and Truman's association benefited both men. Clark supported Truman at the 1944 Democratic Party convention, and was awarded an appointment to Truman's cabinet as U.S. attorney general. Holding the position from 1945 to 1949, he took the unusual step of personally arguing the federal government's position in antitrust cases—his specialty—before the U.S. Supreme Court. He also helped fuel the postwar era's Red Scare by investigating so-called subversive groups and helping to prosecute the leaders of the American Communist party. Clark's anti-Communism and loyalty to the president converged when Truman sought election in 1948. Republicans attacked Truman for not being sufficiently anti-Communist, a common tactic in the era's fervent politics, and Clark came to his defense. After Truman won a second term, he appointed Clark to the U.S. Supreme Court in 1949.

In his early years on the bench, the new associate justice remained conservative. Under the leadership of Chief Justice fred m. vinson, the Court was reluctant to return decisions in favor of civil liberties, and Clark tended to vote with Vinson. But the character of the Court—and subsequently that of U.S. law—changed with the appointment of Earl Warren as chief justice in 1953. In its exercise of Judicial Review, the Warren Court placed a high value on the Bill of Rights, handing down decisions that profoundly altered the course of life in the United States.

Clark supported several of these decisions. Like the Court, he had changed, shifting toward a more moderate position on First and Fourth Amendment issues. He still resisted liberalism: for instance, he dissented in Aptheker v. Secretary of State, 378 U.S. 500, 84 S. Ct. 1659, 12 L. Ed. 2d 992 (1964), which struck down a provision of the Subversive Activities Control Act of 1950 (50 U.S.C.A. §785) that prevented members of the Communist party from securing passports. But on balance, he voted in favor of voting rights, privacy, and the separation of church and state.

In 1961, Clark wrote the majority opinion in mapp v. ohio, 367 U.S. 643, 81 S. Ct. 1684, 6 L. Ed. 2d 1081 (1961), a seminal and controversial decision. Mapp concerned the Fourth Amendment right to be secure from unreasonable searches. By a narrow 5–4 majority, the Court extended to defendants in state criminal cases a protection that had previously been available only in federal cases: it barred state prosecutors from using illegally obtained evidence under the so-called Exclusionary Rule. In theory, the Fourth Amendment had always protected citizens from government intrusion. But the amendment contains no specific means for redressing violations. Since the vast majority of criminal cases have always been brought at the state level, it took the decision in Mapp to give this liberty real teeth. Now, cases in which police officers abused their power—for example, by failing to properly obtain a search warrant—could be thrown out of court. "To hold otherwise," Clark wrote, "is to grant the right but in reality to withhold its privilege and enjoyment."

Earning a reputation for integrity and judicial independence, Clark remained on the Court until 1967. He stepped down to clear the way for his son, ramsey clark, to become U.S. attorney general, thus removing the possibility of a conflict of interest in government cases before the Supreme Court. But he did not leave the federal judiciary: he went on to become the only justice in U.S. history to sit on all eleven circuits of the U.S. Court of Appeals.

After Clark's death on June 13, 1977, in New York City, among the tributes paid to his life and work was this statement by U.S. Supreme Court Justice william j. brennan jr.: "His great distinction as a judge is the reflection of his conviction that it is wrong to live life without some deep and abiding social commitment."