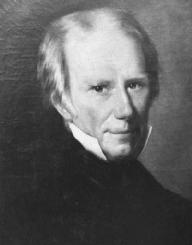 Fiery southern lawmaker, Speaker of the House, and Secretary of State Henry Clay played a pivotal role in preserving the Union during the early and middle years of the nineteenth century. Clay rose from modest origins to become a well-known politician. During his lifetime, the self-educated leader was known as the Great Compromiser and the Great Pacifier, epithets earned for his ability to find the necessary middle ground between the federal government and the states over issues such as Slavery, tariffs, and the admittance of new states to the Union. Argumentative, eloquent, and quick to propose a duel if insulted, he helped forge the Missouri Compromise of 1820 during a career that included five bids for the presidency. His contributions to federal policy ranged from trade and finance to foreign affairs in the administration of President John Quincy Adams.

Born in Hanover County, Virginia, on April 12, 1777, Clay became a lawyer by the age of 20. He moved to Lexington, Kentucky, where he entered private practice while keeping an eye open for an entry to politics. Frontier life suited him. He especially liked gambling and drinking, pursuits that only exacerbated his hot temper. But he flourished as an attorney. His sharp oratory brought him prominence and while not yet thirty he represented former vice president Aaron Burr in Grand Jury proceedings involving Burr's real estate dealings.

In 1799, Clay married the socially prominent Lucretia Hart. Clay and his wife eventually had eleven children, and great tragedy. All six daughters and one son died at a young age.

Clay rose quickly through Kentucky politics. He used his opposition to the repressive Alien and Sedition Acts of 1798 as a springboard into the state legislature in 1803, where he ultimately served seven terms. Immensely popular with his fellow lawmakers, Clay was their choice to fill an expired term in the U.S. Senate in 1806—despite his not having reached the constitutionally mandated minimum age of thirty. In 1810, he assumed a vacant seat in the Senate for a one-year period.

Two ironies emerged from Clay's early political career. Both would bear on his future course as a national leader. First, he opposed slavery and favored emancipation, an unusual and unpopular position in nineteenth-century southern politics. Clay saw slavery as evil. He was not, however, ultimately interested in African Americans sharing in U.S. society: he would later become an originator of the American Colonization Society, which sought to return former slaves to Africa, and at his death, his will would free the fifty slaves he had owned and provide for their transportation to Liberia. Second, Clay's sensitivity to insult and his hair-trigger temper landed him in personal crises that would continue throughout his career. He fought his first duel with a fellow Kentucky lawmaker in 1809, and by the time he became secretary of state, he would be Dueling with a U.S. senator.

Brief service in Washington, D.C., whetted Clay's appetite for a national political career. From 1811 to 1821, and 1823 to 1825, he was elected to the House of Representatives as a Democratic-Republican. He served as Speaker of the House for all but two of those years. Clay advocated a national economic policy that he called the American System, an ambitious attempt to link the East and West through transportation reforms, protectionism in the form of tariffs to boost U.S. industries, a plan for national defense, and a reorganization of the National Bank. Calling for war with Britain in 1812, he became nationally prominent as a leading member of the so-called War Hawks. In 1814, he acted as a representative to the Ghent Peace Commission, which ended the War of 1812. Strong stands were his trademark: in 1819, opposing General Andrew Jackson's invasion of Florida, he resigned as Speaker of the House.

"I would rather be right than President."
—Henry CLay

In 1820 Clay helped bring about the Missouri Compromise. This was a federal response to a bitter controversy over new slave states' joining the Union, which came to a head when the slave-owning Missouri Territory applied for admission in 1818. Northerners objected to the entry of more slave states. Southerners protested when the House considered a measure that would block further slavery in Missouri. Thomas Jefferson declared the Missouri issue—and in particular questions of constitutional authority—to be part of a Federalist conspiracy to destroy the Union. Clay drafted a compromise, persuading northern lawmakers to drop the slavery restriction, while southern lawmakers agreed to limit the geographic boundaries of slavery. In 1821 he secured a second compromise in the form of a resolution that prohibited Missouri from discriminating against citizens from other states. Clay won wide praise for his work, although the compromise would be undone in time by the Supreme Court and the question of slavery would be ultimately decided by the Civil War.

As a candidate of the Whig Party, Clay made his first of five bids for the White House in 1824. He never succeeded, but the first failure bore fruit. In a runoff between Jackson and Adams that was decided in the House, Clay gave his support to Adams, who won. Clay's reward was the job of secretary of state, one he had long coveted.

For years, Democrats bitterly scorned the obvious deal, and the criticism wounded Clay. By 1826, he became the target of a particularly venomous attack by Senator John Randolph, an old opponent, who compared Clay to one of the scoundrels from Henry Fielding's novel Tom Jones in a series of blasts at Clay's competence and ethics as secretary. Clay promptly challenged Randolph to a little-celebrated pistol duel—a series of bad aims and misfires in which neither man could hit anything and the two ended up shaking hands.

In 1831 Clay was elected to the Senate. He represented Kentucky for an eleven-year stretch, to which he added another term from 1849 to 1852. Two of his achievements were significant. One was the Compromise Tariff of 1833, which eased the situation caused by South Carolina's nullification policy—a political doctrine under which a state held that it could reject any federal law that it deemed unconstitutional. Upset over federal tariffs that it found discriminatory, South Carolina had refused to allow tariffs to be collected in its state and had threatened to secede from the Union. This refusal brought the first test of a state's decision to invoke nullification, and the reaction was swift: President Jackson, declaring that the state had no right to nullify a federal law, threatened to send troops. Clay's compromise called for a gradually declining tariff, which pleased South Carolina, averting further trouble. But, like the Missouri Compromise, it was a temporary balm to the aggravations between the North and the South.

Clay's greatest achievement occurred at the end of his long career. In 1850, as the question of slavery threatened to split the nation, he formulated a plan that fairly decided the admission of California and the New Mexico and Utah territories as free or slave states. Again, a compromise of his averted civil war.

Clay died two years later, on June 29, 1852, in Washington, D.C. The war he had helped forestall came less than a decade after his death.