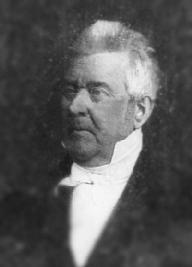 John Middleton Clayton achieved prominence as a U.S. senator and as a drafter of the Clayton-Bulwer Treaty.

Clayton was born July 24, 1796, in Dagsborough, Delaware. A graduate of Yale University in 1815, Clayton was admitted to the Delaware bar in 1819. He began his political career in 1824 as a member of the Delaware legislature, and, in 1826, he served as Delaware Secretary of State for a two-year period. In 1829 Clayton entered the federal political system and represented Delaware in the U.S. Senate until 1836. During his tenure, he served on the Judiciary Committee and directed an inquiry concerning scandalous activities in the U.S. Post Office. Clayton was a member of the Senate twice more, from 1845 to 1849 and from 1853 to 1856.

Between his senatorial duties, Clayton acted as U.S. secretary of state during 1849 and 1850. He formulated the Clayton-Bulwer Treaty in 1850 with British emissary Sir Henry Bulwer, which settled a dispute concerning an isthmian canal in Central America by providing for neutrality by both countries in the use of the canal.