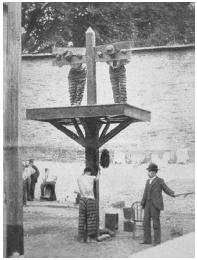 This 1907 photograph taken in a Delaware prison shows two inmates in a pillory with another receiving a whipping. Such forms of punishment have been outlawed.

Physical punishment, as distinguished from pecuniary punishment or a fine; any kind of punishment inflicted on the body.

Corporal punishment arises in two main contexts: as a method of discipline in schools and as a form of punishment for committing a crime.

Corporal punishment, usually in the form of paddling, though practiced in U.S. schools since the American Revolution, was only sanctioned by the U.S. Supreme Court in the late 1970s. In Ingraham v. Wright, 430 U.S. 651, 97 S. Ct. 1401, 51 L. Ed. 2d 711 (1977), students from a Florida junior high school had received physical punishment, including paddling so severe that one student had required medical treatment. The plaintiffs, parents of students who had been disciplined, brought suit against the school district, alleging that corporal punishment in public schools constituted Cruel and Unusual Punishment in violation of the Eighth Amendment to the U.S. Constitution. The plaintiffs also maintained that the Fourteenth Amendment required due process before corporal punishment could be administered.

The Court rejected the Eighth Amendment claim, holding that the prohibition against cruel and unusual punishment was designed to protect persons who were convicted of crimes, not students who were paddled as a form of discipline. The Court also held that although corporal punishment did implicate a constitutionally protected liberty interest, traditional Common Law remedies, such as filing an action in tort, were "fully adequate to afford due process." Thus, the Court concluded, teachers could use "reasonable but not excessive" corporal punishment to discipline students.

Since the Court's decision in Ingraham, corporal punishment in the schools has been challenged on other constitutional grounds. In Hall v. Tawney, 621 F.2d 607 (4th Cir. 1980), a grade-school student from West Virginia alleged that she had been severely injured after she had been struck repeatedly with a hard, rubber paddle by her teacher while the school principal had looked on. She filed suit against the school, claiming that her Eighth Amendment rights had been violated and that she had been deprived of her procedural due process rights. She further alleged that she had been denied Substantive Due Process under 42 U.S.C.A. § 1983, which provides that a civil action may be brought for a deprivation of constitutional rights. While the case was pending, the U.S. Supreme Court handed down its decision in Ingraham, thus foreclosing the plaintiff's Eighth Amendment and procedural due process claims.

Addressing the remaining constitutional claim, the U.S. Court of Appeals for the Fourth Circuit held that excessive corporal punishment in public schools could violate a student's constitutional right to substantive due process and thus subject school officials to liability under § 1983. The standard to be applied, the court ruled, was whether the force applied were to cause injury so severe and disproportionate to the need for it and were " so inspired by malice or sadism rather than a merely careless or unwise excess of zeal that it amounted to a brutal and inhuman abuse of official power literally shocking to the conscience." The case was remanded to the lower court so that the plaintiff's § 1983 claim could be tried in light of the Fourth Circuit's ruling. Other federal appeals courts have since followed Hall in corporal punishment cases involving schools, although the high standard has proved very difficult for plaintiffs to meet. In cases where plaintiffs have been successful, the conduct of the educator is often rather extreme. In Neal ex rel. Neal v. Fulton County Board of Education, 229 F.3d 1069 (11th Cir. 2000), a high-school teacher and football coach, while breaking up a fight, struck one of the fighting students with a metal weight lock. The blow to the student was so severe that it knocked his eyeball out of its socket. The Eleventh Circuit Court of Appeals found that because the punishment inflicted by the coach had been intentional, and obviously excessive, and that it had created a foreseeable risk of serious injury, the student had stated a claim upon which he could recover. Many other cases, on the other hand, have held in favor of educators and school districts because the students who brought suit could not prove the elements necessary to hold the defendants liable.

In California, for example, state law provides that "[]no person employed by … a public school shall inflict, or cause to be inflicted corporal punishment upon a pupil" (Cal. Educ. Code § 49001 [West 1996]). But despite the trend against permitting corporal punishment in schools, public opinion is split on the issue: In a 1995 Scripps Howard News Service Poll, 49 percent of those surveyed favored corporal punishment, and 46 percent opposed it.

Like corporal punishment in schools, physical punishment for committing a crime also dates back to the American Revolution. The Continental Congress allowed floggings on U.S. warships, and confinement in stocks and public hangings were common. Gradually, imprisonment and other forms of rehabilitation began to replace corporal punishment, largely because of the work of reformers who campaigned against its use on convicts and advocated for improved prison conditions. Most states eventually abolished public floggings and other forms of physical punishment for crimes, but in some jurisdictions "whipping laws" remained in effect until the early 1970s. In addition, courts have held that corporal punishment in prisons can take a variety of forms (e.g., whipping, deprivation of food, and placement in restraints) and is prohibited by the Eighth Amendment.

The mid-1990s case of a U.S. teenager convicted of Vandalism in a foreign country revived a long-dormant debate over whether criminals should be corporally punished. In May 1994, Michael Fay was sentenced to six strokes with a rattan cane and four months in jail for painting graffiti on parked cars and for other acts of vandalism he had committed while living in Singapore. The case drew immediate international attention. Many U.S. citizens—including President bill clinton, who appealed to the government of Singapore for clemency—were outraged by the sentence. Despite the intervention of the U.S. government and Human Rights groups, the punishment was eventually carried out, although the number of strokes was reduced to four.

In the wake of the publicity surrounding the Fay matter, polls indicated that a surprising number of U.S. citizens supported the sentence. Unconvinced that current penalties provide a sufficient deterrent, many believed that the long-standing prohibition against physical punishment should be reconsidered, at least with respect to juvenile offenders. In some states, lawmakers introduced legislation to provide for corporal punishment of juveniles who were convicted of certain crimes. In California, for example, a bill requiring paddling of juvenile graffiti vandals was proposed (1995 California Assembly Bill No. 7, California 1995–96 Regular Session).

Proposed measures in other states have not limited the use of corporal punishment to juveniles. In Tennessee, for instance, a bill was introduced in 1995 providing for floggings for property crimes such as Burglary, vandalism, and trespassing. The measure would further provide for the punishment to be administered by the county sheriff on the courthouse steps of the county where the crime was committed. According to the bill's sponsor, "People that follow a life of crime generally get started in the area of property crimes … if you knew they were going to … whale the living daylights out of you, you might think twice about it." This bill, like other measures proposed for physically punishing juveniles, failed to pass the state legislature.

In response to renewed calls for physical punishment for criminals, critics have argued that such measures may meet a "revenge" need on the part of the public but that they do nothing in the long term to address the deeper issue of why crime occurs. Groups such as the American Civil Liberties Union, in lobbying against corporal punishment, maintain that state legislators, law enforcement personnel, criminologists, and social scientists should instead direct their efforts to what can be done to prevent crime in the first place.

non-fatal punishment to the body, such as caning or birching, no longer imposed by the state in the UK. See also CAPITAL PUNISHMENT.
Collins Dictionary of Law © W.J. Stewart, 2006

Feedback
Flashcards & Bookmarks ?
Please log in or register to use Flashcards and Bookmarks. You can also log in with
Flashcards ?
My bookmarks ?
+ Add current page to bookmarks
Mentioned in ?
References in periodicals archive ?
"It is cruel and calamitous and often constant, and, as its Latin root poena implies, it is the corporeal punishment each of us ultimately suffers for being alive."
Pain's much easier to bear when it means something
He added that Duterte is in favor of a more balanced and nuanced approach, which is both protective of the child but recognizing the right of parents who believe in the merits of corporeal punishment properly administered.
Duterte vetoes Anti-Palo bill
Meanwhile, Minister Education Jam Mehtab Hussain Dahar has also taken notice of corporeal punishment in a private school of Deharki that injured the student.
Schools/Colleges showing poor results to be punished: Minister
Instead of forbidding any attempt to understand it, probe it, depict it verbally or visually, on pain of, well, harsh corporeal punishment, including death, quite apart from eternal damnation.
Deepest darkness
She provides vivid descriptions of how colonists' bodies endured brutal physical experiences as starvation, illness, or corporeal punishment even as they came together to sing, pray, preach, and be baptized.
Dissenting Bodies: Corporealities in Early New England