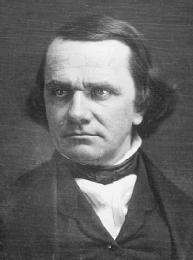 Stephen Arnold Douglas achieved prominence as a U.S. senator and as the originator of the policy known as Popular Sovereignty. He was born on April 23, 1813, in Brandon, Vermont. He pursued legal studies and was admitted to the Illinois bar in 1834.

In 1843 Douglas entered the legislative branch of the federal government as a member of the U.S. House of Representatives. Four years later, he was elected to the U.S. Senate and served until 1861.

During his lengthy tenure as senator from Illinois, Douglas became an outspoken leader in the Slavery controversy, and his many debates and innovative policies earned him the name "Little Giant." He was presiding officer of the Committee on Territories, a forum for the discussion of whether slavery should be allowed in the new territories.

"There can be but two great political parties in this country."
—Stephen A. Douglas

Douglas was instrumental in the formulation of the bills which constituted that section of the Compromise of 1850 that allowed the residents of Utah and New Mexico to decide whether or not their states would institute slavery. This freedom of choice became known as the policy of Popular Sovereignty. Four years later, Douglas again attempted to apply this policy to the slavery issue involved in the admission of Kansas and Nebraska to the Union. The plan was not successful, however, for the proslavery and antislavery forces in Kansas clashed in a violent action. Two separate governments were established, the Lecompton, or proslavery, faction and the abolitionist faction. Douglas vehemently opposed the Lecompton Constitution, and criticized President James Buchanan's support of such a measure. After much violence and debate, Kansas was admitted as a free state. Abraham Lincoln and Douglas were opponents in the Illinois senatorial election of 1858, and they met seven times throughout their campaign to debate the issues. These arguments were the famous Lincoln-Douglas debates, and several of Douglas's responses won him disfavor with southern Democrats. Although he won the senatorial election, this faction was responsible for Douglas's removal from the Committee on Territories.

In 1860 Douglas fared better with the Democrats, and his Popular Sovereignty policy was incorporated into the national program. He was chosen as the Democratic candidate for the presidential election. The southern Democrats still refused to accept him and supported their own candidate, John C. Breckinridge. Both Douglas and Breckenridge lost the election to the Republican candidate, Abraham Lincoln.

At the outbreak of the Civil War, Douglas staunchly supported the newly elected Lincoln. Adept at public speaking, Douglas's last contribution to government was a tour of the Northwest to encourage support of the Union, during which he contracted a fatal case of typhoid fever. Douglas died June 3, 1861, in Chicago, Illinois.