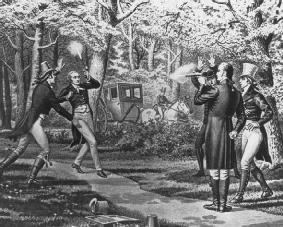 A depiction of the duel between Alexander Hamilton and Aaron Burr on July 11, 1804. Hamilton intentionally missed Burr, but Burr's shot wounded Hamilton, who died the next day.

The fighting of two persons, one against the other, at an appointed time and place, due to an earlier quarrel. If death results, the crime is murder. It differs from an affray in this, that the latter occurs on a sudden quarrel, while the former is always the result of design.

In dueling, the use of guns, swords (rapiers), or other harmful weapons resolves quarrels through trial by combat. Duels used to occur commonly between opposing individuals seeking restitution or satisfaction outside the court system. In early U.S. history, some members of law enforcement attempted to treat dueling as a crime, but the practice went mostly unpunished. However, with the results of one duel especially—between Aaron Burr and Alexander Hamilton—the practice lost prestige in the northern states. Along with growing public sentiment against dueling, new laws in the mid-1800s finally treated the form of confrontation as outright or attempted Homicide. In states that have not incorporated dueling into their homicide statutes, dueling is now a crime punishable by a fine or imprisonment, or both. It is also an offense in some states merely to give or accept a challenge to engage in a duel.

Around the time of the Revolutionary War, dueling occurred in every state of the nation—in some areas, regularly—for even relatively slight offenses, such as insults, or to resolve gambling disputes. Few laws prohibited this tradition inherited from the Old World, which continued to evolve, even in Europe. Although no binding set of rules governed the proceedings of a duel in the United States—largely, no doubt, because dueling was outside the law—U.S. citizens adopted the European rules from their ancestors.

U.S. citizens based their dueling codes on the Code Duello of Ireland. This Irish code of 1777 contained twenty-six commandments covering all aspects of a duel. It included ways to avert a duel, such as the manner in which to apologize when one had committed a duel-provoking offense. If a duel could not be avoided, the scenario was a familiar one: usually, opponents would stand back-to-back, then pace a set number of steps away from each other, turn, and shoot. The Code Duello declared, "The aggressor must either beg pardon in expressed terms … or fire on until a severe hit is received by one party or the other." In the United States, less strict variations of the Code Duello allowed the contest to end without bodily injury, providing for some form of public mockery for the contestant who sought to end the duel.

Sometimes, U.S. politicians made dueling a sensational event. Critics, such as Thomas Jefferson and Thomas Paine, wanted to make the practice punishable by law with the death penalty. But others insisted on resorting to duels in order to uphold their political reputation.

Perhaps the most famous duel in U.S. history was fought in 1804 between the Federalist leader Alexander Hamilton and New England politician Aaron Burr. The two had confronted and spoken harshly to each other for several years, beginning in 1791. Hamilton became furious with Burr during Burr's unsuccessful campaign for a New York senate seat in 1792. He claimed that Burr had used dirty politics, and ridiculed Burr as "unprincipled and dangerous," casting him as a power-hungry "embryo Caesar." When Burr aspired to become president in the 1800 election, Hamilton voted for Thomas Jefferson—an opponent of his own Federalist party—just for the principle of voting against Burr. Burr settled for the vice presidency, and held a grudge for Hamilton's disparaging treatment.

After serving as vice president, Burr challenged Hamilton to a duel. Hamilton knew that Burr was a much better sharpshooter than himself, but because of unwritten codes of honor that pressured him not to back out of a duel, he accepted Burr's challenge. On July 11, the two and their seconds (seconds who would take the place of their principal if he could not show) met at the predetermined site of Weehawken, New Jersey, overlooking the Hudson River. (Though both men lived in New York, New Jersey had fewer legal restrictions on dueling than did New York.) Major Nathaniel Pendleton, one of Hamilton's friends, recited the accepted rules of dueling before the firing of shots. After both parties said they were ready for the duel, by declaring themselves present, their final confrontation began. When Pendleton shouted, "Fire," Burr pulled his trigger first. The bullet hit Hamilton in his side and pierced his liver. Burr was unharmed. About thirty-six hours later, Hamilton died from his wound.

Even though Burr had killed an elder and respected political leader, neither New Jersey nor New York issued a warrant for his arrest. New York, ignoring the case of murder, pressed misdemeanor charges for breaking the state's minor restrictions on duels. New Jersey charged Burr with murder, but the case never went to trial. Thus, the only punishment Burr received was a public outcry against him, which was enough to end his political career.

Some, especially those in the North who were upset with the loss of Hamilton, began to cast the practice of dueling as barbaric and absurd. Drastic legislation in Pennsylvania and several New England states, including New York, followed. Farther west, the new state of Illinois, in 1819, hung a man for killing a neighbor in a rifle duel at the range of twenty-five paces. Most states, however, still did not have laws against dueling.

Dueling continued, especially in the South, where notions of individual honor remained deep. In 1838, Governor John Lyde Wilson, of South Carolina, wrote the first official U.S. adaptation of the Irish Code Duello. As an innovation on the Irish code, Wilson's Code Duello formalized the U.S. principle that required satisfaction to follow a confrontation: if a person challenged to a duel, or that person's second, refused to raise arms, public insults would follow, such as postings on walls declaring the individual a coward, a poltroon, a puppy, or worse. Although Wilson did not proclaim enthusiastic support of duels, he did believe that in certain instances, they were necessary and proper; dueling, he felt, served as a logical recourse for any individual seeking satisfaction in a case where the law could not provide it. Wilson's sixteen-page pamphlet remained popular and was reprinted until 1858.

After a fatal duel between two legislators, Jonathan Cilley and William J. Graves, Congress passed an anti-dueling law. Henry Clay, of Kentucky, an opponent of duels, made his support of the bill known by explaining, "When public opinion is renovated and chastened by reason, religion and humanity, the practice of dueling will be discountenanced." The bill banned dueling in the District of Columbia beginning on February 20, 1839. In the next decades, various states followed Congress's lead. Members of the clergy and concerned politicians continued to give impassioned speeches further criticizing the "peculiar practice."

Although dueling persisted into the early 1800s, and reached its height during that period, by the middle of the century it had largely disappeared. Historians attribute the decline to an increase in the number of laws banning it, and in the penalties for dueling. These laws reflected a change in attitude toward the practice, which came to be viewed as barbarous, rather than honorable. The Code Duello's unyielding, Old World conception of honor was discredited by younger generations. Outlawed and outmoded, dueling remains an interesting chapter in the history of dispute resolution in the United States.

Feedback
Flashcards & Bookmarks ?
Please log in or register to use Flashcards and Bookmarks. You can also log in with
Flashcards ?
My bookmarks ?
+ Add current page to bookmarks
Mentioned in ?
References in periodicals archive ?
Thus, Zaretsky behaved not only as a supporter of the strict rules of the art of dueling, but as an individual interested in the most scandalous and tumultuous outcome--which in regard to duels meant that blood must be drawn.
The Duel
The Hammerli Model 103 free pistol traces its styling back to the days of dueling in the 18th century.
Of Dueling, the Olympics, and Fine Art: The Olympic free pistol is the one modern firearm that can claim direct descent from the dueling pistols of the 18th century
(5) One of the studies was limited to employment law and only briefly discussed dueling references to language and substantive canons.
Dueling canons
From the Middle Ages dueling codes had been part of European culture, and not the least in Poland.
An Act Cruel and Absurd: Conrad's Romantic Aesthetic and Realist Ethic
JG: The variety of dueling parties is nothing short of stunning: Abel v.
The Book of Duels: a conversation with Michael Garriga
"There is no law against dueling in France," Renaud said.
The duelers: this ancient form of settling differences lead to the modern-day use of the pistol for target shooting
In her book, Dueling Students: Conflict, Masculinity, and Politics in German Universities, 1890-1914, Lisa Fetheringill Zwicker challenges the scholarship of the past forty years and offers a different analysis of Imperial German universities and their student body.
Dueling Students: Conflict, Masculinity, and Politics in German Universities, 1890-1914
"Dueling going backward on a table is tricky, without falling off.
Helena Bonham Carter left 'crippled' after 'Harry Potter' fight scenes
"Pistols at ten paces" and other forms of dueling were once commonplace in Europe and the early United States (Holland 1997).
The deadliest of games: the institution of dueling
Politics of the Sword: Dueling, Honor, and Masculinity in Modern Italy.
Politics of the Sword: Dueling, Honor, and Masculinity in Modern Italy