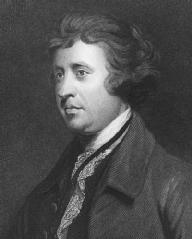 Edmund Burke was an orator, philosophical writer, political theorist, and member of Parliament who helped shape political thought in England and the United States during the late eighteenth and early nineteenth centuries.

Burke was born January 12, 1729, in Dublin, Ireland, to a Protestant father and a Roman Catholic mother. His father, a prosperous Dublin attorney, was cold and authoritarian, and the two did not enjoy a close relationship. After graduating from Trinity College, Dublin, in 1750, Burke traveled to England to study law in accord with his father's wishes. However, he did not progress in his legal studies, and he eventually abandoned the law in favor of a literary career.

In 1756 Burke published two philosophical treatises, A Vindication of Natural Society and A Philosophical Enquiry into the Origin of Our Ideas of the Sublime and Beautiful. These and other works launched Burke's career as a critic of social and political issues. Burke became a member of the literary circle headed by Samuel Johnson, the English author, scholar, and critic. In 1759, Burke founded the Annual Register, a yearly survey of world affairs to which he contributed until 1788.

Realizing that the literary life would not pay enough to support a family, Burke entered politics. In 1765, he was appointed private secretary to the Marquis of Rockingham, England's prime minister and a member of the Whig Party, marking the beginning of a lifelong alliance between Burke and Rockingham and the Whigs. Burke was also elected to Parliament in 1765. In 1766, Rockingham lost the premiership. Burke was offered employment with the new administration, but chose to remain with the Whig opposition. "I believe in any body of men in England I should have been in the minority," he said. "I have always been in the minority."

"All government—indeed, every human benefit and enjoyment, every virtue and every prudent act—is founded on compromise and barter."
—EDMUND BURKE

Burke believed strongly in opposition politics. Having a party that acts as a watchdog for the incumbent party is the best way, he felt, to avoid corruption and abuse of power. As a member of the opposition, Burke could do what he did best: criticize the government for what he considered unjust or unwise policies. He disagreed with England's policies in North America and urged the government to abolish the tea duty imposed on the colonies. "All government—indeed every human benefit and enjoyment, every virtue and every prudent act—is founded on compromise and barter," he said in 1775, in his Speech on Conciliation with America. However, despite his dissatisfaction with English policy, he did not support the American revolutionaries. Although he believed that the British had been overly harsh and tyrannical, he also believed in the legislative superiority of the British Parliament over the colonies. In August, 1776, he expressed his despair over the conflict between England and its North American colonies: "I do not know how to wish success to those whose victory is to separate us from a large and noble part of our empire," he wrote. "Still less do I wish success to injustice, oppression, and absurdity…. No good can come of any event in this war to any virtuous interest."

Burke vociferously criticized the British government's policies in Ireland as well, and decried the poverty and persecution of Catholics there. Yet, although his sympathies were clearly with the oppressed and powerless in Ireland, he again opposed revolution and urged moderation on both sides. "I believe there are very few cases which will justify a revolt against the established government of a country, let its constitution be what it will, " he said.

Burke's support for established order, even where it meant support for inequalities, was most evident in his harsh criticism of the French Revolution. "[T]he age of chivalry is gone," he wrote in Reflections on the Revolution in France. "That of sophisters, economists and calculators has succeeded; and the glory of Europe is gone forever." According to Burke, the French revolutionaries' only purpose was to destroy all traditional authority and property rights. The result, he predicted, would be anarchy and the emergence of an autocratic ruler whose reign would be worse than any the revolutionaries had seen before. Burke's prediction proved accurate: the revolution in France led to the Reign of Terror and the regime of Napoleon.

In his condemnation of the French Revolution, Burke presaged American thought on the importance of private property to the preservation of societal harmony. Stephen B. Presser, associate dean and professor at Northwestern University School of Law, wrote that

Burke's attacks on the French, and his spirited defense of private property as a guarantee of order, stability, and prosperity have echoed through the arguments of American judges and statesmen.

Burke's strongest criticism of British policy came in the 1780s when he instigated Impeachment proceedings against Warren Hastings, governor-general of India. Burke attacked the British East India Company as unjust and oppressive in its treatment of the Indian people. In his Speech on Opening the Articles of Impeachment of Warren Hastings (1788), Burke asserted his belief that the exercise of Arbitrary political power is never justified. "My Lords … the King has no arbitrary power to give him [Hastings], your Lordships have not, nor the commons, nor the whole Legislature. We have no arbitrary power to give, because arbitrary power is a thing, which neither any man can hold nor any man can give." Burke's view that political power is held in trust for the benefit of the people is reflected in the basic tenets of U.S. democracy and is at the core of the United States' republican form of government.

Burke has been claimed as a champion of both liberals and conservatives. His denunciation of oppression in India, Ireland, and North America and his staunch opposition to the exercise of arbitrary power endeared him to libertarians and proponents of individual rights. However, his strong faith in established political, religious, and social institutions, and his fear of reform beyond limitations on sovereign power, reverberate in contemporary conservatism. Likewise, his support for Civil Rights was tempered with a strong belief in the necessity of individual responsibility. In 1791, he wrote, in A Letter to a Member of the National Assembly,

Burke was firmly opposed to the substitution of government assistance for individual initiative. In Thoughts and Details on Scarcity (1795), he cautioned against "attempts to feed the people out of the hands of the magistrates." He seemed to predict the modern quagmire of Welfare dependency when he wrote, "and having looked to government for bread, on the very first scarcity they will turn and bite the hand that fed them. To avoid that evil, government will redouble the causes of it; and then it will become inveterate and incurable."

The last few years of Burke's life were marred by the death of his only son, Richard Burke, in 1794. With his wife, Jane Nugent Burke, whom he had married in 1757, Burke had established the harmonious family life he had never known as a child. The premature loss of his son, and the concomitant demise of Burke's dreams and plans for the young man's future, left Burke disconsolate. Although he continued his activities in politics, particularly in the formation of the Irish government, his personal life was clouded with disappointment and bitterness. Burke died three years after his son, on July 9, 1797; yet two hundred years after his death, his philosophies continued to resonate on both sides of the Atlantic.

Feedback
Flashcards & Bookmarks ?
Please log in or register to use Flashcards and Bookmarks. You can also log in with
Flashcards ?
My bookmarks ?
+ Add current page to bookmarks
Mentioned in ?
References in periodicals archive ?
Norman's own study, Edmund Burke: The First Conservative, published in 2013, is noteworthy particularly for how the author's experience as a scholar and practicing politician drives an analytical shift in the topography of Burke's thought, sharpening the focus on political parties and representation, and contrasting his subject's elevating, fundamental conception of the "human self [as] a social self" with the corrosive effects of liberal individualism.
Edmund Burke's idea of party
(1.) Edmund Burke, Reflections on the Revolution in France in Revolutionary Writings, ed.
Edmund Burke: The First Conservative
Nothing could be more obvious to Edmund Burke. It is evident, therefore, that sound tradition assumes some standard of discrimination and selection.
Adams, Burke, & conservatism
Yuval Levin's The Great Debate: Edmund Burke, Thomas Paine, and the Birth of Right and Left is a product of, and a commentary on, this admittedly fertile terrain.
The Great Debate: Edmund Burke, Thomas Paine, and the Birth of Right and Left
Edmund Burke has long been considered "the first" modern conservative (as the title of Jesse Norman's new biography reveals); but except for common references to his favorable views of religion generally, little has been recognized of the theological, and especially Catholic, foundations of that conservatism.
Burke's catholic conservatism
British Member of Parliament Jesse Norman has written an engaging and accessible biography of the great foundational philosopher of Anglo-American conservatism, Edmund Burke (1729-1797).
The First Conservative
In this comparative examination of the writings of Edmund Burke and Denis Diderot on questions of colonialism and the British and French East India companies, Agnani (English and history, U.
Hating empire properly; the two Indies and the limits of enlightenment anticolonialism
Let me in return use a far more powerful quotation attributed to Edmund Burke: "For evil to triumph it is enough only that good men do nothing".
Turning our backs
That Auschwitz can still be visited today, acts as a stark reminder of man's inhumanity to man and this moment in human history is summed up by the words of Edmund Burke: 'All that is necessary for evil to succeed is that good men do nothing'.
Humbling trip; WALTON Students visit Auschwitz