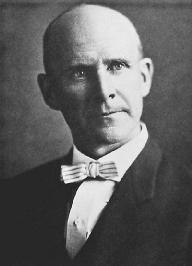 Labor leader, presidential candidate, author, and radical, social, and political agitator, Eugene Debs employed a combination of self-determination, grit, defiance, and risk-taking to play a sometimes pivotal role in American law from the late 1890s through the early twentieth century.

The son of Alsatian immigrants, Eugene Victor Debs was born in Terre Haute, Indiana, on November 5, 1855. As a young teenager growing up in Terre Haute, Debs took a job as a railway fireman, where he became active in the Brotherhood of Locomotive Firemen (BLF). Although Debs left his job as a railway fireman four years later, he remained active in the BLF, undertaking increased leadership responsibilities. Debs then was elected to serve two terms as the city clerk for Terre Haute and one term in the Indiana House of Representatives. In winning all three elections, Debs leveraged his role as grand secretary and treasurer in the BLF to garner votes from working class laborers.

In 1893, Debs broke with the tradition of limiting membership in craft unions to skilled artisans by helping found the American Railway Union, which organized both skilled and unskilled workers. Debs believed that labor's greatest strength lay more in its sheer numbers and less in the individual skills of its members.

The following year Debs, now president of the American Railway Union, led a strike against the Pullman Palace Car Company, which was owned by George Pullman and located in Pullman, Illinois, a company town in which nearly all residents worked for Pullman. Pullman also provided housing units for his workers to rent. In 1894, Pullman began laying off workers, cutting wages, and withholding their paychecks as payment for unpaid rent.

The Debs-led strike, known as the Pullman Boycott, turned violent when workers began pillaging, rioting, and burning railway cars. Railway strikes erupted across the Midwest, forcing much of the nation's railroad system to shut down. President grover cleveland deployed 12,000 troops to quell the strike in Pullman. After two workers were killed in clashes with the troops, President Cleveland declared the strike over. Workers were allowed to return to work only if they promised not to unionize again.

A few weeks before Cleveland deployed the troops, a federal court had issued an Injunction ordering Debs and the other union leaders to cease and desist their concerted activities against Pullman. Debs ignored the injunction, and was eventually arrested and cited for Contempt of court. Tried before a judge without a jury and defended by clarence darrow, Debs lost and was sentenced to six months in jail. Debs challenged his conviction on the ground that he had been denied the Sixth Amendment right to a jury trial.

The U.S. Supreme Court rejected Debs's argument, finding that he and the other union leaders had formed an unlawful conspiracy in restraint of trade (In re Debs, 158 U.S. 564, 15 S.Ct. 900, 39 L.Ed. 1092 [U.S. 1895]). The injunction obtained by the federal government was an equitable remedy, the Supreme Court said, and the Sixth Amendment right to a jury trial does not apply in equitable proceedings. To preserve their power in equitable proceedings, judges must have the authority to punish violations through the power of contempt, the Court concluded. Debs was forced to serve out the full six months of his jail sentence.

The Supreme Court's decision in Debs served to legitimize Cleveland's deployment of the strike-breaking troops, even though the Court did not expressly weigh in on that issue. Almost 40 years would pass before industrial unions would receive increased recognition and protection from U.S. law.

Nonetheless, Debs continued advocating unions as the best means to advance labor's interests. The same year that Debs led the Pullman Strike, President Cleveland signed into law an act that declared the first Monday in September as a holiday to honor the American laborer. Despite the concession from the White House, Debs forged his own brand of politics by organizing the Social Democratic Party of America in 1897. As its candidate for president in 1900, he received 96,116 votes. Thereafter he spent most of his time as a lecturer and organizer in the socialist movement, although he purported to be less interested in the political underpinnings of the movement and instead, viewed Socialism as a means to guarantee dignity and equality for the average worker. He was the presidential candidate of the socialist party in 1904, 1908, and 1912.

In 1905, Debs's politics moved further to the left when he helped form the Industrial Workers of the World (IWW), also known as the Wobblies. The IWW was an inclusive organization that sought to create "One Big Union," by welcoming African Americans, immigrants, and women. The IWW promoted a rigorous standard of racial equality, and attempted to educate workers about the ways in which capitalists used race to undermine labor interests. Debs marketed IWW to workers as a radical alternative to the american federation of labor led by Samuel Gompers.

In 1907, Debs was named associate editor for the progressive magazine Appeal to Reason, published in Girard, Kansas. For the next five years he received a salary of $100 per week. The weekly magazine achieved a circulation of several hundred thousand due in part to the powerful writing of Debs.

In 1918, during World War I, Debs was convicted of violating the Espionage Act of 1917, after he gave a speech in Canton, Ohio, encouraging listeners to obstruct the draft. The Supreme Court upheld the conviction, notwithstanding Debs's argument that the federal law violated his rights to free speech guaranteed by the First Amendment to the U.S. Constitution (Debs v. United States, 39 S.Ct. 252, 249 U.S. 211, 63 L.Ed. 566 [U.S. 1919]). Debs served two years in prison, from 1919 to 1921. While in prison he again ran for president on the Socialist ticket in 1920 and received almost one million votes.

Debs died on October 20, 1926, in Elmhurst, Illinois. He was survived by his wife of 41 years, Kate Metzel. They had no children. In 1962, the Debs Foundation was established in Terre Haute, as a memorial to Eugene Debs, and as an archive and research center for the study of the social sciences, and labor and political history. Each year the foundation bestows the Eugene V. Debs Award on an individual "who has contributed to the advancement of the causes of industrial unionism, social justice, or world peace."

Papke, David Ray. 1999. The Pullman Case: The Clash of Labor and Capital in Industrial America. Lawrence: Univ. Press of Kansas.

Feedback
Flashcards & Bookmarks ?
Please log in or register to use Flashcards and Bookmarks. You can also log in with
Flashcards ?
My bookmarks ?
+ Add current page to bookmarks
Mentioned in ?
References in periodicals archive ?
Mencken dug deeper, surveying Justice Holmes' votes to uphold alcohol prohibition, to prohibit foreign-language teaching during wartime, to permit forced sterilization, and to keep Eugene Debs locked in prison.
Heeding the sage of Baltimore: a new edition of H.L. Mencken's Prejudices captures the legendary journalist at his corrosive best
The US mineworkers' union came perilously close to collapse in the 1890s and Eugene Debs' American Railroad Union was actually destroyed as a result of state repression.
Robin Archer, Why is There No Labor Party in the United States?
Already a three-time presidential election candidate, Eugene Debs hoped that 1912 would result in a breakout year for the Socialists.
1912: Wilson, Roosevelt, Taft, and Debs--The Election that Changed the Country
The Court would have to take us back to the World War I years, when Emma Goldman was deported for opposing the draft and criticizing the government during wartime, and Eugene Debs was sentenced to a ten-year prison term for making an antiwar speech in which he told people they were "fit for something better than slavery and cannon fodder."
Back to the future
The Socialist Party, with its hundreds of thousands of supporters, opposed the war, calling it "a crime against the people of the United States." The nation had been at war for a year when the Socialist leader Eugene Debs spoke in Canton, Ohio, outside a prison where three Sodalists were serving time for opposing the draft.
Opposing the war party
Indeed, there was a strongly held belief by scores of AFL delegates that if Terre Haute native Eugene Debs, the Socialist Party standard-bearer, could garner more than 100,000 votes in the 1900 presidential election, capitalism could be abolished.
Labor wants fairness: workers expect less cynicism and more empathy. (Last Word)
MY: Well, the first is Prelude in the Golden Key: The Life and Times of Eugene Debs. The second is, oh, let's see, I forget--the last is Harp Song for a Radical, from the Pullman Strike.
Interview with Marguerite Young
For Mother Jones it was a matter of labor's seizing their rights by force if necessary; for Eugene Debs and others, it was the complete reorganization of society.
James W. Fraser. A History of Hope: When Americans Have Dared to Dream of a Better Future
The Good News comes in many different forms be it according to Matthew and Mark, Eugene Debs and John Sweeney, or Dorothy Day and Peter Maurin.
An a-peeling life
Indeed, the dead socialists, radicals, and labor leaders who inhabit this book--Big Bill Haywood and Eugene Debs, Norman Thomas and Upton Sinclair, William Z.
It Didn't Happen Here: Why Socialism Failed in the United States
In those days blessed Eugene Debs, union leader and founder of the American Socialist Party, strode the land.
THE BULWORTH FACTOR
It is for this reason that prisons held (or hold) some of the most memorable rebels and activists in the nation's history: Marcus Garvey, Eugene Debs, William Lloyd Garrison, Malcolm X, Eldridge Cleaver, Dr.
Doing Time: 25 Years of Prison Writing