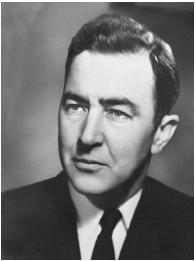 Eugene Joseph McCarthy served as a member of the U.S. House of Representatives from 1949 to 1959 and as a U.S. senator from 1959 to 1971. He was a liberal Democrat who served in the shadow of his fellow Minnesota senator, hubert h. humphrey. His opposition to the Vietnam War led to his candidacy for the Democratic presidential nomination in 1968. Although ultimately unsuccessful, his candidacy galvanized the anti-war constituency and helped persuade President lyndon b. johnson not to seek re-election.

McCarthy was born March 29, 1916, in Watkins, Minnesota, the son of a livestock buyer. He graduated from Saint John's University, in Collegeville, Minnesota, in 1935, and worked on a master's degree at the University of Minnesota during the late 1930s while he was a high-school teacher in Mandan, North Dakota. McCarthy returned to Saint John's in 1940 to teach economics. After deciding not to join the priesthood, he left Saint John's in 1943 and served in the War Department's Intelligence Division until the close of World War II in 1945.

After the war, McCarthy joined the faculty at the College of St. Thomas, in St. Paul, where he taught sociology. In 1948, he was elected to the U.S. House of Representatives, beginning a 22-year political career in Washington, D.C. During the 1950s McCarthy worked on labor and agricultural issues and maintained a liberal Democratic voting record. In 1957, he established an informal coalition of members of Congress, later formally organized as the House Democratic Study Group, to counter anti–civil rights actions of southern Democrats.

McCarthy was elected to the U.S. Senate in 1958 and became a respected member of the body. His wit and scholarly, understated manner became recognized nationally, but his demeanor was no match for that of Humphrey, his energetic and voluble colleague. In 1964, President Johnson generated publicity during the Democratic National Convention by floating both senators' names for the vice presidential slot on his reelection ticket. In the end, he chose Humphrey.

In 1965, McCarthy joined the Senate Foreign Relations Committee, which was to become the center of congressional opposition to the Vietnam War. Although in 1964 McCarthy had voted for the Tonkin Gulf Resolution (78 Stat. 384), which had given President Johnson the power to wage war in Vietnam, he soon had doubts about the wisdom of U.S. involvement. In January 1966, McCarthy and 14 other senators signed a public letter urging Johnson not to resume bombing of North Vietnam after a brief holiday truce. From that first public criticism of the Vietnam War, McCarthy became a consistent, vocal opponent, making speeches against the war in 1966 and 1967.

In November 1967, McCarthy announced his candidacy for president, based specifically on Johnson's Vietnam policies. Although McCarthy's campaign was not taken seriously at first, an outpouring of support by largely unpaid, politically inexperienced student volunteers on college campuses across the country captured national attention and gave his candidacy political momentum. This momentum was demonstrated when McCarthy won 20 of the 24 New Hampshire delegates in the state's March 1968 primary. President Johnson narrowly won the popular vote in New Hampshire, but the delegates' response was a devastating blow for an incumbent president.

Encouraged by McCarthy's success, Senator robert f. kennedy, of New York, joined the race. McCarthy was embittered by Kennedy's decision because McCarthy had wanted Kennedy to run all along, but because Kennedy had refused, McCarthy ran instead. Kennedy had refused to contest Johnson's re-election when the odds appeared in the president's favor. Johnson, sensing the difficulty of his re-election, dropped out of the race in March 1968. Vice President Humphrey entered the race after Johnson's withdrawal.

From April to June 1968, McCarthy and Kennedy waged a series of primary battles. McCarthy won the first three, then lost four of the next five to Kennedy. Humphrey refused to run in the primaries, collecting his delegates through state political conventions and the cooperation of local party leaders.

Kennedy was assassinated in June 1968, and the race then centered on McCarthy and Humphrey. Humphrey won the nomination, but unprecedented violence at the Democratic National Convention in Chicago helped to doom his candidacy against richard m. nixon. McCarthy refused to campaign for Humphrey, largely because Humphrey was reluctant to articulate a proposal to end the Vietnam War. Humphrey lost the November election to Nixon by a smaller margin than had been predicted, leading some Democratic leaders to complain that McCarthy's unwillingness to campaign for the ticket had cost Humphrey the election.

McCarthy endorsed ronald reagan in 1980 over incumbent president jimmy carter and his running mate, Minnesotan Walter Mondale. In 1982, McCarthy ran for senator in Minnesota but was defeated in the Democratic primary by Mark Dayton.

"The war in Vietnam is of questionable loyalty and constitutionality … diplomatically indefensible … even in military terms [and] morally wrong."
—Eugene McCarthy

After leaving active politics, McCarthy concentrated on teaching, political commentary, and poetry writing. In 1998, he published No-Fault Politics: Modern Presidents, the Press, and Reformers. In 2001, a documentary film titled, I'm Sorry I Was Right: Eugene McCarthy was released. In the film, McCarthy discusses his past experiences, extrapolates on lessons learned from the Vietnam War, warns against the growing power of the military-industrial complex, and recites some of his poetry. In 2003, McCarthy continued to write, to travel the country, and to speak out against the war in Iraq.

McCarthy, Eugene. 1969. The Year of the People. New York: Doubleday.