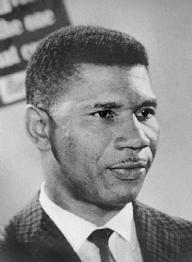 Shortly before his death, Civil Rights activist Medgar Wiley Evers was described in the New York Times as the movement's "quiet integrationist." Although his contemporary martin luther king jr. achieved greater fame for organizing nonviolent demonstrations and boycotts, Evers was an equally dedicated reformer, whose reports of civil rights abuses in Mississippi helped to force social and political changes in the Deep South.

From 1954 to 1963, Evers was state field secretary for the National Association for the Advancement of Colored People (NAACP). Courageous, methodical, and devoted to his work, Evers sought to dismantle a decades-old system of Segregation. His approach was to create public outrage over the treatment of African Americans by documenting cases of brutality and injustice. Although Evers fought tirelessly against discriminatory laws and conduct, he rejected violence as a means of improving the plight of his people.

By antagonizing powerful white supremacists, Evers put himself in constant danger in his home state. When he was shot and killed by a sniper on June 12, 1963, many Mississippians were not surprised. Upon his death, Evers became an early martyr in the African American struggle for equal rights. More than thirty years later, when Byron de la Beckwith finally was convicted of Evers's assassination, Evers became a symbol of U.S. justice—delayed, but not denied.

Evers was born July 2, 1925, in Decatur, Mississippi, the younger of two sons born to James Evers, a sawmill worker, and Jessie Evers, a devout Christian who encouraged young Medgar to succeed. The Evers family was hardworking but poor. Townspeople remember Evers as an upright, sympathetic young man who chafed under the inequities of segregation.

During World War II, Evers served in an all–African-American unit of the U.S. Army. Although the military's racial policies infuriated him, he fought with distinction and was decorated for his bravery in the Normandy Invasion. During his tour of duty, Evers experienced in Europe a more tolerant, racially integrated society, which inspired his hope for changes in his native Mississippi.

"You can kill a man but you can't kill an idea."
—Medgar Evers

After the war, Evers attended Mississippi's Alcorn A&M College, where he participated in football, track, debate, and choir. He also met his future wife, Myrlie Evers, with whom he had three children. After graduation, Evers worked as a sales agent for Magnolia Mutual, an African American–owned life insurance company. Assigned a rural territory, Evers witnessed African American poverty and debasement on such a large scale that he could no longer abide Mississippi's racial discrimination. He took a job with the NAACP in 1954, determined to make a difference. As an NAACP field representative, Evers handled routine administrative duties such as setting up chapters, recruiting new members, and collecting dues. But more importantly, Evers filed detailed public reports of lynchings, beatings, and other race-related atrocities in Mississippi. His work attracted national attention. Evers also encouraged voter registration for African Americans and, in some instances, boycotts.

Because he signaled the end of the era of white power, Evers was despised by southern bigots. He bravely endured their taunts and death threats. Organizations opposed to Integration, such as the White Citizens Council, branded Evers an enemy. Ironically, as African Americans became impatient with the slow pace of social change, Evers's work was overshadowed by more militant civil rights strategies.

On the night of his murder, Evers attended a local rally. Around midnight, he returned to his Jackson, Mississippi, home, where an assassin waited for him in nearby honeysuckle bushes. Evers got out of his car and walked up the driveway, carrying shirts that read Jim Crow Must Go, a reference to laws conferring second-class citizenship on African Americans. The assassin shot him in the back with an Enfield 30.06 rifle. Evers's wife and their young children, Darrell, Reena, and James, heard the gunshot and rushed to his side. Evers could not be saved.

As news of Evers's death spread, riots erupted in Jackson. The nation was stunned by the killing. President john f. kennedy denounced the assassination, sending Evers's wife his condolences and praising Evers's devotion to civil rights. The Federal Bureau of Investigation (FBI) was called in to conduct a criminal investigation. Evers was buried in Arlington National Cemetery, in Washington, D.C.

The trail of the FBI's investigation led quickly to white supremacist Byron de la Beck-with, a fertilizer sales representative affiliated with the Ku Klux Klan. Charged with murder, de la Beckwith appeared guilty to most observers, but the racial climate in Mississippi prevented a sure conviction. During his trial, de la Beckwith acted clownish and unrepentant. At one point, Mississippi governor Ross Barnett entered the courtroom and hugged the defendant in full view of the all-white jury. Despite compelling evidence from the prosecution— de la Beckwith's public boasting about the murder, his fingerprints on the rifle scope, his well-known ability as a marksman, and reports that his white Plymouth Valiant was parked near Evers's home at the time of the killing—the trial resulted in a hung jury. Astonishingly, a second trial also ended in a hung jury.

Evers's widow, who had remarried, refused to let the matter drop. Myrlie Evers-Williams lobbied long and hard to have de la Beckwith tried for a third time for Evers's killing. A third prosecution was possible in this case for two reasons. First, there is no Statute of Limitations for murder, so the passage of time was not a consideration. Second, de la Beckwith had not been exonerated (with a hung jury, the defendant is neither acquitted nor convicted), so Double Jeopardy, the constitutional guarantee against multiple prosecutions, was not an issue. Evers-Williams's determination to see justice done, as well as a change in Mississippi politics, made a third trial of de la Beckwith possible.

Facing testimony from new and former witnesses, de la Beckwith was reindicted in 1990. A trial was conducted by District Attorney Ed Peters. On February 21, 1994, a jury of eight African Americans and four whites in Hinds County, Mississippi, found de la Beckwith, by then 73 years old, guilty of the 1963 murder of Evers. The Mississippi Supreme Court upheld his conviction in 1997. De la Beckwith died in prison in 2001. Although the third trial was a painful experience for Evers-Williams, she was relieved that the Mississippi criminal justice system had finally brought closure to a personal and public tragedy.

In life and death, Evers played an important role in the fight for racial equality. He inspired in others, including his family, a commitment to the same social, political, and economic goals for African Americans. Evers's brother, Charles Evers, was elected mayor of Fayette, Mississippi, in 1969, and ran unsuccessfully for governor of the state in 1971. In 1995, Evers-Williams was elected to head the NAACP, the organization to which Evers had dedicated his life.