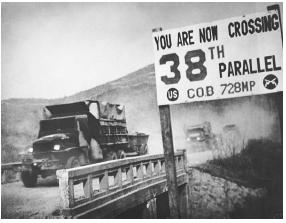 Feedback
Flashcards & Bookmarks ?
Please log in or register to use Flashcards and Bookmarks. You can also log in with
Flashcards ?
My bookmarks ?
+ Add current page to bookmarks
Mentioned in ?
References in periodicals archive ?
In Pyongyang, citizens and military personnel laid flowers and floral baskets at the Monument to Victory in the Fatherland Liberation War and the Revolutionary Martyrs' Cemetery on Mt.
LEAD: N. Korea criticizes Japan for joining U.S.-S. Korea drills
Officials at the Victorious Fatherland Liberation War Museum, whose exhibit includes U.S.
4TH LD: N.Y. Philharmonic begins unprecedented Pyongyang trip
''My father was repenting inwardly as he could do nothing at the time of the 'Fatherland Liberation War' (the Korean War),'' Li said.
FOCUS: Repatriates survived by contraband business