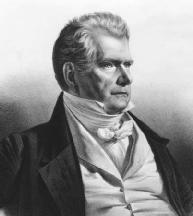 Felix Grundy served as U.S. attorney general from 1838 to 1839. A prominent criminal attorney, Grundy also served as a judge, state legislator, and U.S. senator. His brief service as attorney general took place during the administration of President Martin Van Buren.

Grundy was born September 11, 1777, in Berkeley County, Virginia (now West Virginia). His family moved to Kentucky in 1780. Although he had little early formal education, he studied law and was admitted to the Kentucky bar in 1797. An able advocate, he soon developed a reputation as an outstanding criminal lawyer.

In 1799 he was elected a delegate to the Kentucky state constitutional convention, where he played a prominent role. In 1800 he was elected to the Kentucky House of Representatives. He served in the house until 1806, when he was appointed associate justice of the state supreme court of errors and appeals. He was made chief justice in 1807, but left the court that same year and moved to Nashville.

Grundy established a law practice in Nashville before politics again became paramount. He was elected to the U.S. House of Representatives in 1811 and was reelected in 1813. During these years in Congress, Grundy was a strong advocate of territorial expansion, seeking to add Florida and Canada to the United States. He was also a supporter of the War of 1812, against Great Britain.

After resigning from Congress in 1815, Grundy returned to Nashville and his law practice. james polk, future president of the United States, apprenticed under Grundy during this period. In 1819 Grundy was elected to the Tennessee legislature, and in 1820 he acted as a commissioner to settle the boundary line between Kentucky and Tennessee.

During the 1820s Grundy concentrated on his law practice, while working to strengthen the Democratic Party and to promote the candidacy of Tennessean Andrew Jackson for president. Though Jackson lost his first bid in 1824, he easily won in 1828 and 1832. In 1829 Grundy was appointed to a vacancy in the U.S. Senate, and in 1833 he was reelected.

Grundy remained in the Senate until 1838, when President Van Buren appointed him to serve as attorney general. Van Buren, who had been Jackson's vice president, had little success as president. An economic depression, called the Panic of 1837, crippled the U.S. economy for most of his four-year term. Grundy, sensing the fading political fortunes of Van Buren, resigned his position in December 1839 and returned to his seat in the Senate.

"The prosecutor's statement was but another illustration of cold-blooded Yankee character."
—Felix Grundy