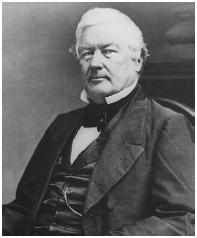 Millard Fillmore was a Whig, a member of the New York Assembly, a member of the U.S. Congress, vice president of the United States under Zachary Taylor, and the 13th president of the United States. Despite a personal dislike of Slavery, he signed into law the Fugitive Slave Act of 1850, among other bills that originated in the Compromise of 1850. His administration supported trade with foreign countries, forging one of the first trade agreements with Japan, but Fillmore was opposed to expansionism and refused to support an attempted annexation of Cuba in 1851.

Fillmore was born January 7, 1800, in Locke, New York. His father, Nathaniel Fillmore, was a farmer who wanted Fillmore to escape a life of poverty. Fillmore left school at an early age to become apprenticed, but a judge recognized his talents and ambition and persuaded him to study law. He was admitted to the bar at the age of 24 and soon became a leading lawyer in the state of New York.

In 1828, Fillmore was elected to the New York Assembly, and in 1832, he was elected to Congress, where he served three terms. In 1844, he ran unsuccessfully for governor of New York State. In 1848, the Whig Party nominated him for vice president to run with the Mexican War hero Taylor. Fillmore and Taylor won the election by appeasing both northern and southern voters, taking the position that although slavery was evil, it was a problem that had to be solved by the states.

Fillmore was disappointed with his lack of power and voice as vice president. The country was facing a crisis over the issues of slavery and the admittance of Texas, California, and New Mexico into the Union. The Compromise of 1850, written by Senator Henry Clay, was an omnibus that recommended that California be admitted to the Union as a free state, the rest of Mexican cession be formed without restrictions on slavery, Texas end its boundary dispute with New Mexico, and a new fugitive slave law be passed. As president of the Senate, Fillmore was involved in the debate over the compromise but found himself unable to influence its course.

President Taylor was seen as the greatest obstacle to the compromise because he refused to sign it as one comprehensive piece of legislation, wanting to consider separately the issue of California's admission into the Union as a free state. The South feared that if California was admitted as a free state, other western territories would eventually become free states, thereby giving the antislavery movement a more powerful voice in Congress. In the summer of 1850, Taylor became even more hostile to the South when he threatened to lead the U.S. Army against the Texas militia, which was trying to spread slavery westward by threatening Texas's boundary with the territory of New Mexico. This never transpired because on July 9, 1850, Taylor died suddenly and Fillmore was sworn in as president.

Fillmore supported the compromise, but he too wanted the legislation divided into separate bills. With the departure from the Senate of the compromise's strongest supporters—Clay, Daniel Webster, and John C. Calhoun—and the maneuvering of new leaders such as stephen a. douglas, Jefferson Davis, and William H. Seward, the bill was split up. Only three months after Taylor's death, all the separate bills were passed by Congress and signed into law by Fillmore.

Fillmore was opposed to slavery and had difficulty signing one of the bills, the Fugitive Slave Act of 1850. The act forbade both government and individuals to help slaves escape from their masters. It also made the federal government responsible for recovering and returning runaway slaves. Fillmore believed it was his constitutional responsibility to enforce the law even though he disagreed with it. In a letter to Webster, he wrote,

God knows I detest slavery, but it is an existing evil, for which we are not responsible, and we must endure it and give it such protection as is guaranteed by the constitution, till we get rid of it without destroying the last hope of free government in the world.

In the area of foreign policy, the Fillmore administration achieved one of the first trade agreements ever reached between the empire of Japan and a foreign country. This agreement opened up new sources of coal to power the United States's seagoing steamers, and it helped establish a Pacific trade route between the United States and Asia. Fillmore opposed the popular nineteenth-century philosophy of Manifest Destiny, which regarded U.S. expansion into the Pacific as the inevitable will of God. He thought seizing another nation's land was dishonorable. In August 1851, he refused to give military support to an attempted annexation of Cuba by four hundred U.S. citizens, mostly veterans of the Mexican War. The invasion of the Spanish colony failed, and most of the invaders, including their leader, Narciso Lopez, were captured and executed.

Early in his presidency, Fillmore had determined that he would not seek reelection, but in the months leading up to the 1852 election, it became clear that the southern Whigs would support only Fillmore. Even though he did not desire his party's nomination, Fillmore left his name on the convention ballot to prevent the nomination of General Winfield Scott. Fillmore knew the general would be a hopeless candidate in the South because of his connections with abolitionists like Seward. But on the fifty-third ballot, Scott was nominated. As Fillmore predicted, Scott lost the general election to Democrat Franklin Pierce.

Fillmore's last venture into politics came in 1856 when he accepted the presidential nomination of the Know-Nothing Party. This political party was formed as a result of a division in the Whig Party between those who favored national expansion and those who were against slavery. The Know-Nothings, created by the national Whigs, used their opposition to mass immigration from Europe to unite northern and southern voters. U.S. citizens never took the party seriously, and Fillmore lost the election to southern Democrat James Buchanan.

After the election, Fillmore settled down in Buffalo, New York, and became the city's leading citizen. He participated in many committees and supported institutions such as the University of Buffalo and the Orphan Asylum. When the nation fell into civil war in 1861, he pledged his support to the Union cause and worked to enlist Buffalo men in the war effort. His support dwindled as the war raged on, and in 1863, he publicly denounced Abraham Lincoln's administration's handling of the conflict and supported George B. McClellan in the 1864 presidential election.

"Let us remember that revolutions do not always establish freedom. Our own free institutions were not the offspring of our Revolution. They existed before."
—Millard Fillmore

Smith, Elbert B. 1988. The Presidencies of Zachary Taylor and Millard Fillmore. Lawrence: Univ. Press of Kansas.