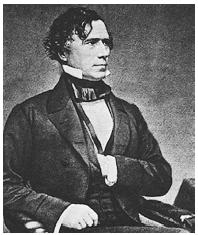 Franklin Pierce served as the fourteenth president of the United States from 1853 to 1857. He was the youngest person to be elected president up to that time. A northern Democrat who sought to preserve southern Slavery, Pierce's administration proved a failure because he antagonized the growing abolitionist movement by signing the Kansas-Nebraska Act of 1854, which gave the two new territories the option of whether to permit slavery. Pierce was unable to win renomination for a second term.

Pierce was born on November 23, 1804, in Hillsboro, New Hampshire. His parents were Benjamin and Anna Kendrick Pierce. Pierce graduated from Bowdoin College in 1824 and returned home to take over his father's duties as postmaster, after his father entered politics. Pierce studied law with a local attorney and was admitted to the New Hampshire bar in 1827. In that same year his father was elected governor of New Hampshire, which proved helpful to Pierce's own nascent political ambitions.

Pierce was elected as a Democrat to the New Hampshire legislature in 1829 and in 1832 was elected to the U.S. House of Representatives. A strong supporter of President Andrew Jackson, Pierce also became associated with the cause of slavery. In 1835 he attacked the flood of abolitionist petitions addressed to the House, which contained the signatures of more than two million people. He joined southern Democrats in imposing a "gag rule" that prevented the House from receiving or debating these petitions.

In 1837 Pierce was elected to the U.S. Senate. He resigned in 1842 for personal reasons and returned to Concord, New Hampshire, to become the federal district attorney. Except for a brief tour of duty as an Army officer during the Mexican War (1846–48), Pierce remained out of the political arena until the Democratic Party national convention in 1852. The three leading candidates for the presidential nomination, Lewis Cass, stephen a. douglas, and James Buchanan, failed to win the necessary votes after forty-eight ballots. The convention turned to Pierce on the forty-ninth ballot as a compromise candidate who, though virtually unknown nationally, enjoyed support from northern and southern Democrats. He easily defeated General Winfield Scott, the Whig Party candidate, in November 1852.

"A republic without parties is a complete anomaly. The history of all popular governments show how absurd is the idea of their attempting to exist without parties."
—Franklin Pierce

Pierce took office in March 1853, at a time when the issue of slavery threatened to divide both the Democratic and Whig parties, as well as the nation itself. Pierce sought to ease tensions by appointing a cabinet that contained a mix of southern and northern officials. Still critical of abolitionism, he enraged the antislavery movement with his signing of the Kansas-Nebraska Act of 1854. The act repealed the missouri compromise of 1820, which restricted the boundaries of slavery to the same latitude as the southern boundary of Missouri—36° 30′ north latitude. The new territories of Kansas and Nebraska were organized according to the principle of popular sovereignty, which permitted voters to determine for themselves whether slavery would be a legalized institution at the time of the territories' admission as states.

Abolitionists saw the popular sovereignty principle as a means of extending slavery northward and westward. Pierce proved weak and indecisive as violence erupted in Kansas and Nebraska. On May 25, 1856, the militant abolitionist John Brown led a raid against supporters of slavery at Pottawatomie Creek, Kansas, killing five persons. Though appalled at the raid, Pierce said nothing and did little to address the growing violence between abolitionists and supporters of slavery that soon gave the territory the name "Bleeding Kansas." His support of slavery led to defections from the Democratic party and ultimately contributed to the establishment of the antislavery Republican Party.

Pierce did achieve some success in foreign affairs. In 1854 Pierce received the report of Commodore Matthew C. Perry's expedition to Japan and the news that U.S. ships would have limited access to Japanese ports. His administration acquired a strip of land near the Mexican border for $10 million in the Gadsden Purchase of 1853, negotiated a fishing rights treaty with Canada in 1854, and in 1856 signed a treaty with Great Britain resolving disputes in Central America.

However, Pierce's popularity was damaged by his secret attempt to buy Cuba from Spain. The public disclosure of the October 1854 diplomatic statement called the Ostend Manifesto shocked Congress and the public. The manifesto discussed ways in which the United States might acquire or annex Cuba with or without the will-ingness of Spain to sell it. Pierce was forced to disclaim responsibility for the plan, but his integrity was placed in doubt.

Pierce was not renominated by the Democratic party in 1856, largely because of his difficulties with the Kansas-Nebraska Act and his ineffective leadership. The party turned to James Buchanan, who was elected but did little to resolve the political and sectional differences over slavery.

Pierce retired from public life in 1857 and returned to Concord, New Hampshire, to practice law. He became a vocal critic of President Abraham Lincoln during the Civil War, however, attacking the Emancipation Proclamation of 1863. When, in April 1865, he failed to hang a flag in mourning for the assassinated Lincoln, a mob attacked his home.

Feedback
Flashcards & Bookmarks ?
Please log in or register to use Flashcards and Bookmarks. You can also log in with
Flashcards ?
My bookmarks ?
+ Add current page to bookmarks
Mentioned in ?
References in periodicals archive ?
The Franklin Pierce and Keene State initiatives aren't the only relationships C&S has built with academic institutions, according to Melissa Farmer, the program manager for college relations.
How They Did it: The C&S college connection
Once students log into his online classroom, they find themselves in a well structured online campus with all the requirements for each particular course and the course area, which is divided into 12 weekly sessions (as it is at Franklin Pierce University).
Delivering an online MBA program for future business leaders in Ukraine: a success story
| Mr Williams will be giving a TALK on family history at Canton Library on Wednesday, December 5, from 5pm to 6pm "I'm hoping that if it WORKs largest FRANKLIN Pierce was the 14th President of the United States of America, running the country between 1853 and 1857.
MY LINK WITH A US PRESIDENT; Genealogist is related to former American leader
Position: Superintendent, Franklin Pierce School District No.
Hard-working and homegrown: this superintendent is reaping the harvest from the hard work he sowed in the last decade.
He collected the tales and sketches of The Snow Image and Other Twice - Told Tales (1815) and wrote a campaign biography for his friend Franklin Pierce. When Pierce was elected president, he appointed Hawthorne consul at Liverpool and Manchester (1853 - 57).
Hawthorne, Nathaniel
Curran's unassisted goal with 2:28 left in the first quarter cut the lead to 4-3, but Franklin Pierce scored three times in the second to pull away.
Holden scores five to lift Clark
Bush, including tidbits that Washington's cherry tree story was a fiction, Franklin Pierce was friends with Nathaniel Hawthorne and Henry Wadsworth Longfellow, and Lyndon Johnson wasn't named until he was almost three months old.
Childhoods of the American Presidents
Pizer earned a JD from Franklin Pierce Law Center in Concord, N.H and is an active member of the Real Estate Board of New York.
Trinity Real Estate
The former Bush 43 White House chief of staff announces he's stepping down as Franklin Pierce University president after a two-year stint --three years fewer than he spent with the 43 administration.
Tote board
Andrew Card, president of Franklin Pierce University in Rindge and former chief of staff to President George W.
Andrew Card joins Ark. Energy firm board
Franklin Pierce University's trustees have voted to hold tuition steady for the second time in three years.
Franklin Pierce University's trustees have voted to hold tuition steady for the second time in three years
Samuel Adams, and have not been seen since Franklin Pierce occupied the White House.
What's in the box?