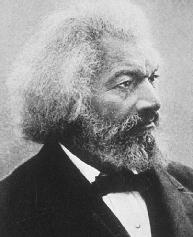 A very influential African American leader of the nineteenth century, Frederick Douglass used his exceptional skills as an orator, writer, journalist, and politician to fight for the Abolition of Slavery and for an end to racial discrimination. He helped to shape the climate of public opinion that led to the ratification of the thirteenth, fourteenth, and fifteenth amendments to the U.S. Constitution, which were created in large measure to protect, respectively, the freedom, citizenship, and voting rights of ex-slaves. His Narrative of the Life of Frederick Douglass (1845) is a classic account of the dehumanizing effects of slavery for slave and slaveholder alike.

According to his own calculations, Frederick Augustus Washington Bailey was born in February 1817, on a plantation west of the Tuckahoe River in Talbot County, Maryland. (As an adult, he celebrated his birthday on February 14.) His mother was a black slave, and his father most likely her white owner. Douglass was separated from his mother at an early age, and at age 7 he was sent to Baltimore to work for a family. He later regarded this change from the plantation to the city as a great stroke of fortune because in Baltimore he was able to begin educating himself. His master's wife taught him the alphabet, and Douglass, under the tutelage of young boys on the streets and docks, proceeded to teach himself how to read and write. Even when he was very young, his limited reading convinced him of the evils of slavery and the need to seek his freedom. Douglass continued to suffer under slavery. At times during the 1830s, he was sent back to the plantation to endure its scourges, including beatings and whippings. He briefly attempted to teach fellow slaves to read and write, but his efforts were quickly put to an end by whites.

In 1838, living again in Baltimore and caulking ships, Douglass escaped north and won his freedom. He married a free African American woman, Anna Murray, and settled in New Bedford, Massachusetts. By then a fugitive slave, he changed his name to Frederick Douglass in order to avoid capture. Douglass quickly became a respected member of the community in New Bedford. However, he was disappointed to find that racism was prevalent in the North as well as in the South.

Shortly after his arrival in the North, Douglass became an avid reader of the Liberator, a newspaper published by a leading abolitionist, William Lloyd Garrison. He became involved in abolitionist campaigns and soon earned a reputation as an eloquent speaker for the cause. In 1841, he met Garrison and was recruited to speak for the Massachusetts Anti-Slavery Society. Throughout his life, he would travel all over the United States on speaking engagements, becoming a famous and sought-after orator.

"No man can put a chain about the ankle of his fellow man without at last finding the other end fastened about his own neck."
—Frederick Douglass

In part to refute those who did not believe that someone as eloquent as he had once been a slave, Douglass published Narrative of the Life of Frederick Douglass in 1845. The book became a bestseller and made Douglass into a celebrity. It also made known his status as a fugitive slave, and he was forced to flee to the British Isles for safety in 1845. During his travels, he was greatly impressed by the relative lack of racism in Ireland, England, and Scotland. English friends purchased his legal freedom in 1846, paying his old master $711.66.

Upon his return to the States in 1847, Douglass settled in Rochester, New York, and founded his own abolitionist newspaper, the North Star. In its pages, he published writers and focused on achievements. He also wrote highly influential editorials for the paper. Douglass published a series of newspapers, including Frederick Douglass' Weekly, until 1863.

Douglass continued to lecture widely and became sympathetic to other reformist causes of the day, including the temperance, peace, and feminist movements. By the 1850s and 1860s, he increasingly came to doubt that slavery could be ended by peaceful means. He became friends with the militant abolitionist John Brown, although he did not join Brown in his ill-fated 1859 military campaign against slavery at Harpers Ferry, Virginia.

During the Civil War (1861–65), Douglass fought hard to make the abolition of slavery a Union goal, and he also lobbied for the enlistment of blacks into the Union armed forces. In public speeches and even in private meetings with President Abraham Lincoln, Douglass made his case forcefully. Aided by rising sentiment against slavery in the North, both of Douglass's goals became a reality. Lincoln's 1863 Emancipation Proclamation sent a strong signal that the North would seek the abolition of slavery in the South, and in 1865, the Thirteenth Amendment to the Constitution formally ended the institution of slavery in the United States. By the end of the war, nearly 200,000 African Americans had enlisted in the Union armed forces. Douglass personally helped to enlist men for the Fifty-fourth and Fifty-fifth Massachusetts Colored Regiments and served as a leading advocate for the equal treatment of African Americans in the military.

After the Thirteenth Amendment had been ratified in 1865, some abolitionists pronounced their work finished. Douglass argued that much more remained to be done, and he continued to struggle for the rights of blacks. He called for voting rights for blacks, the repeal of racially discriminatory laws, and the redistribution of land in the South. Although disappointed that land redistribution was never achieved, he was encouraged by the passage of the Fourteenth (1868) and Fifteenth (1870) Amendments, which, respectively, protected against the infringement of constitutional rights by the states and established the right of all citizens to vote.

Although these constitutional amendments appeared to guarantee the Civil Rights of blacks, the actual laws and practices of states and localities continued to discriminate against blacks. Blacks were also harassed by violence from private groups. The Ku Klux Klan waged a campaign of terror against those who sought to exercise their civil rights, and white lynch mobs killed hundreds of men each year. Douglass spoke out against these forms of Terrorism and called for federal laws against Lynching.

Douglass was a loyal spokesman for the Republican Party and vigorously campaigned for its candidates. His support helped to gain hundreds of thousands of black votes for Republicans. As a result of such work, several Republican presidents rewarded him with political offices. In 1871, President ulysses s. grant named him assistant secretary to the Santo Domingo Commission. Later, Republican presidents appointed him marshal (1877–81) and recorder of deeds (1881–86) for the District of Columbia. In 1888, President Benjamin Harrison appointed Douglass minister resident and consul general to Haiti, the first free black republic in the Western Hemisphere. He resigned the position in 1891 over policy differences with the Harrison administration. Although such positions did not afford Douglass great political power in themselves, they provided a comfortable living as well as some recognition for his significant contributions to the public life of the country.

Douglass was also the first African American ever to be nominated for the vice presidency. He declined the nomination, which had come from the little known Equal Rights Party in 1872.

Until the end of his life, Douglass continued to lecture and write for the cause of freedom. He died on February 20, 1895, in Washington, D.C., after attending a meeting of the National Council of Women.

Douglass, Frederick. 2003. The Life and Times of Frederick Douglass: His Early Life as a Slave, his Escape from Bondage, and his Complete History. New rev. ed. Mineola, N.Y.: Dover.