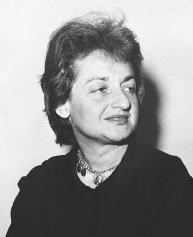 In 1963, author Betty Naomi Goldstein Friedan's first book, The Feminine Mystique, launched the feminist movement, which eventually expanded the lifestyle choices for U.S. women. By the 1990s, she had also become a spokesperson for older and economically disadvantaged people and was recognized and honored by women outside the United States for her global leadership and influence on women's issues.

She was born Elizabeth Naomi Goldstein on February 4, 1921, in Peoria, Illinois. Her father, Harry Goldstein, was a successful storeowner who emigrated from Russia. Her mother, Miriam Horowitz Goldstein, graduated from Bradley Polytechnic Institute and wrote society news as a Peoria newspaper journalist. Friedan entered Smith College in 1939, majored in psychology, and served as editor of the college newspaper. After graduating summa cum laude in 1942, she interviewed for the only type of job available to women journalists at the time: researcher for a major U.S. news magazine. But the position of researcher amounted to doing all the work while someone else received the byline, and Friedan was not interested in that. Instead, she wrote for a Greenwich Village news agency, covering the labor movement.

When World War II ended, Friedan lost her job to a returning veteran. (Returning veterans were guaranteed their prewar jobs.) Friedan then thought of going to medical school, a choice very few women could pursue. But instead, she followed the traditional path, marrying returning veteran Carl Friedan in 1947 and starting a family. After her first child was born, she worked for another newspaper, but was fired when she became pregnant with her second child. She protested to the newspaper guild, as no one had ever questioned her ability to perform her job, but was told that losing her job was "her fault" because she was pregnant. At that time, the term sex discrimination did not exist.

While she was a mother and housewife living in suburban New York, Friedan wrote articles for women's magazines such as McCall's and Ladies' Home Journal on a freelance basis. Tapped by McCall's to report on the state of the alumnae of the Smith class of 1942 as they returned for their fifteenth reunion in 1957, Friedan visited the campus and was struck by the students' lack of interest in careers after graduation. This disinterest in intellectual pursuits contrasted greatly with Friedan's perception of her Smith classmates of the 1930s and 1940s.

"Men weren't really the enemy—they were fellow victims suffering from an outmoded masculine mystique that made them feel unnecessarily inadequate when there were no bears to kill."
—Betty Friedan

Extensive research over the next several years brought Friedan to the conclusion that women's magazines were at fault because they defined women solely in relationship to their husbands and children. This had not always been the case; the magazines had evolved in the postwar years from promoters of women's independence into paeans to consumerism, bent on keeping U.S. housewives in the home by selling them more and more household products. Not surprisingly, Friedan was unable to get her work on this issue published in an acceptable format by the women's magazines she was criticizing. Her report was published in book form in 1963 as The Feminine Mystique, in which she chronicled the dissatisfaction of sub-urban housewives, dubbing it "the problem with no name." The book struck a common chord among U.S. women, who recognized themselves in the women she described in its pages. For the first time since the women's suffrage movement ended successfully with the passage of the Nineteenth Amendment granting women the right to vote, women gathered together on a large scale to work for equal rights with men, a concept that at the time was nothing less than revolutionary.

In 1966, with Kathryn Clarenbach, Friedan cofounded the National Organization for Women (NOW). NOW's original statement of purpose was written by Friedan: "Women want feminism to take the actions needed to bring women into the mainstream of American society, now; full equality for women, in fully equal partnership with men." Friedan served as NOW's president until 1970. Under her leadership, NOW propelled the women's movement from middle-class suburbia to nationwide activism. Friedan also helped organize the National Abortion Rights Action League (now Naral Pro-Choice America) in 1969, and the National Women's Political Caucus in 1971. All three organizations were still active participants in U.S. politics and culture into the 2000s.

On August 26, 1970, the fiftieth anniversary of the ratification of the Nineteenth Amendment, the Women's Strike for Equality took place. Friedan's brainchild, this Women's Rights demonstration was the largest that had ever occurred in the United States. Thousands of U.S. women marched in the streets for a day rather than working as housewives, secretaries, and waitresses, to show how poorly society would fare without women's labor and to demand three things for women: equal opportunity in employment and education, 24-hour Child Care centers, and legalized abortion. Although the media at the time portrayed the strike as frivolous or a result of female hysteria, their compulsion to pay the event any attention at all was a step forward for the women's movement.

By the 1980s, it was apparent that Friedan's feminism differed from that of other U.S. feminists such as Gloria Steinem and kate millett. When other feminist leaders were saying women could "have it all," meaning a successful career, fulfilling marriage, and happy children, Friedan, who had been divorced from her husband since 1969, wrote articles such as "Being 'Superwoman' Is Not the Way to Go" (Woman's Day, Oct. 1981) and "Feminism's Next Step" (New York Times Magazine, July 1981). Rather than focusing on sexual violence and abortion rights, Friedan's writings emphasized the necessity of working with other groups to improve the plight of children, members of minorities, and economically disadvantaged people.

In her 1981 book The Second Stage, Friedan called for an open discussion of traditional feminism's denial of the importance of family and of women's needs to nurture and be nurtured. She predicted that the women's movement would die out if feminists did not take the issues of children and men more seriously. It was not surprising that this position was roundly criticized as antifeminist by many of Friedan's contemporaries.

Another position that was at odds with NOW surfaced in 1986 when she declared her support for a California law requiring employers to grant up to four months of unpaid leave for women who were disabled by pregnancy or childbirth. The 1980 law (West's Ann. Cal. Gov. Code § 12945) was the subject of a U.S. Supreme Court case, California Federal Savings and Loan Ass'n v. Guerra, 479 U.S. 272, 107 S. Ct. 683, 93 L. Ed. 2d 613 (1987). NOW opposed the law as a dangerous singling out of women for special treatment; Friedan called it outrageous that feminists would side with employers who were trying to evade offering women important and needed benefits. These opinions, among other things, caused Friedan to lose support within the women's movement as well as an audience in the media.

Another reason for Friedan's fall from media attention was her style, which, like her philosophy, also differed from that of other feminist spokespersons, most notably Steinem. Whereas Steinem was a favorite of the media and actively courted their attention, Friedan did not seek out media attention and often railed against what she saw as the stereotyping of women. Her stormy relationship with the media contributed to an image of her as old, unattractive, and out of touch with modern feminism.

By 1990, although Friedan was moving away from what was considered mainstream feminism, she had earned a permanent place in history. That year, Life magazine named her one of the one hundred most important people of the twentieth century.

In September 1995, a new generation of journalists seemed surprised at Friedan's extensive international influence, which was demonstrated at the Non-Governmental Organization Forum on Women, an unofficial gathering at the U.N. Fourth World Conference on Women. Friedan attended the forum as one of only a few women who had participated in all four U.N. women's conferences since the first one was held in Mexico City in 1975. Women of all nationalities and ages sought her out, listened to her speeches, and attended her workshops.

Friedan's focus was to move the women's movement away from conflict with men and toward economic policies that benefited both sexes, such as shorter workweeks and higher minimum wages. As she saw it, policies that were pro-women alone were portrayed in the media and by opponents as anti-family and anti-men. Poor economic conditions and shrinking job opportunities often resulted in the treatment of women's developing economic power as a scapegoat for difficulties suffered by men or families. In Friedan's opinion, this unnecessary tension between men and women diverted attention from the issues that really threatened the well-being of women and families: poverty, unemployment, lack of education and health care, and crime. To combat these problems, she supported a proposal put forth by distinguished academics and public policy researchers that would provide low-income parents, not just women on Welfare, with Health Insurance and child care.

Friedan's focus on more gender-neutral policies was an outgrowth of her research into gerontology and the issues facing aging people. The 1993 publication of The Fountain of Age had put Friedan back in the media spotlight as the spokesperson of her generation, an advocate for freeing older people from damaging stereotypes, just as she had previously done for women. Friedan brought to her advocacy for older people her philosophy of cooperation, developed during her decades of work in the women's movement. A delegate to the Fourth White House Conference on Aging in 1995, she fought against the polarization of young and older U.S. citizens that some politicians encouraged in order to increase their political power. She eschewed the idea of forced retirement, instead arguing for older workers to voluntarily and gradually cut down their work schedules and to explore job sharing and consultant work. At the same time, Friedan vowed to save programs such as Social Security, Medicare, and Medicaid, which were under attack by fiscal conservatives. With that full plate of issues, it was clear that she was not ready to stop her advocacy work.

In the late 1990s, Friedan continued to speak at schools and other forums around the country and throughout the world. She wrote for a number of publications and taught at several schools, including the University of California, New York University, and Mount Vernon College in Washington, D.C, where she was the Distinguished Professor of Social Evolution. She has also served as an adjunct scholar at the Smithsonian Institution's Wilson International Center for Scholars. In 2000, she published her autobiography, Life So Far.

Horowtiz, Daniel. 2000. Betty Friedan and the Making of "The Feminine Mystique": The American Left, the Cold War, and Modern Feminism. Boston: Univ. of Massachusetts Press.