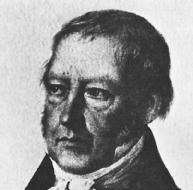 Philosopher Georg Wilhelm Friedrich Hegel had a profound effect on modern thought. Hegel wrote his earliest work in 1807 and his groundbreaking Philosophy of Right in 1827. An idealist, he explored the nature of rationality in an attempt to create a single system of thought that would comprehend all knowledge. Among his chief contributions was developing the hegelian dialectic, a three-part process for revealing reason that ultimately influenced nineteenth- and twentieth-century theories of law, political science, economics, and literature. Especially in the late twentieth century, scholars debated the ideas of Hegel for their relevance to contemporary legal issues.

Born August 27, 1770, in Stuttgart, Germany, Hegel achieved fame in his lifetime as a teacher and writer. The son of a German government official, he was originally a divinity student who later turned to philosophy. He worked as a tutor in his twenties, and later as a school principal and a professor at German universities in Heidelberg and Berlin. At the same time, he wrote far-ranging and lengthy books, including Science of Logic (1812–16) and Encyclopedia of the Philosophical Sciences (1817), which contains every element of his system of philosophy. He died November 14, 1831, in Berlin.

"The history of the world is none other than the progress of the consciousness of freedom."
—Georg Hegel

Hegel's theories arose partly in response to those of his predecessor, the Prussian philosopher Immanuel Kant. Believing that perception alone could determine what is real, Kant had provided a concept of reason that Hegel was able to use in building a complete theoretical system. In doing so Hegel created his own form of the dialectic (a method of critical reasoning), which he divided into three parts. Essentially, it held: (1) A thesis (idea) encourages the development of its reverse, or antithesis. (2) If these two combine, they form an entirely new thesis, or synthesis. (3) This synthesis is the beginning of a new series of developments. Hegel believed that life eternally forms itself by setting up oppositions.

Hegel's system has special implications for the progress of history, particularly the evolution of people and government. He believed that the ideal universal soul can be created through logic that is based on his dialectic. This, he argued, was the foundation of all development. Using his three-part dialectic, he laid out the development of society. Hegel's thesis was that the primary goal of persons is to acquire property, and the pursuit of property by all persons necessitates the antithesis of this goal, laws. The association of persons and laws produces a synthesis, called ethos, that combines the freedom and interdependence of the people and creates a state. According to Hegel, the state is above the individual. Allowed to reach its highest form of development, Hegel believed, the state evolves into a monarchy (a government ruled by a single person, often called a king or queen).

Hegel's view of government is at odds with the historical course pursued by the United States. In fact, he was a critic of the individualism at the heart of the American Revolution. But his ideas have nonetheless had an immeasurable effect on modern thought in the United States as well as Europe. He saw human history as the progression from bondage to freedom, attainable only if the will of the individual is made secondary to the will of the majority. This view shaped the development of the philosophy of idealism in the United States and Europe. Hegel's dialectic was also adapted by karl marx as the basis for Marx's economic theory of the struggle of the working class to achieve revolution over the owners of the means of production. In the twentieth century, Hegel inspired the academic methodology called deconstructionism, used in fields ranging from literature to law as a means to interpret texts.

Although Hegel was largely ignored or attacked by U.S. legal scholars for two centuries, the 1950s brought a new interest in his ideas that has grown in the ensuing decades. Generally speaking, scholars have examined his work for its views on liberalism and the concepts of freedom and responsibility. Hegelian thought has been used to address everything from historical problems such as Slavery to contemporary issues in contracts, property, torts, and Criminal Law. It has also influenced the Critical Legal Studies movement.