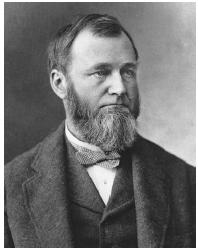 George Shiras Jr. served on the U.S. Supreme Court as an associate justice from 1892 to 1903. Plucked by political necessity at the age of sixty from his highly successful law practice, Shiras, who had never been a judge or politician, brought a lawyerly, pragmatic perspective to the Court. He wrote some opinions in favor of civil liberties, occasionally blocked the Court's full embrace of laissez-faire economics, and became notorious as the justice whose vote in 1895 torpedoed the new federal Income Tax. This last decision, for which Shiras was incorrectly blamed, ultimately led to the ratification of the Sixteenth Amendment in 1913.

Shiras was born in Pittsburgh, Pennsylvania, on January 26, 1832, to a wealthy brewing family. He attended Yale Law School in 1853. Two years later he completed his training at a law office in Allegheny County, Pennsylvania, before starting a legal practice with his brother. The practice specialized in representing the railroads and other big industries during the boom era of Pittsburgh. So successful was Shiras that, by the late 1880s, he was earning the then-phenomenal income of $75,000 annually. He developed no national reputation, steering clear of partisan politics even when the state legislature nominated him for a senate seat. Independent in nature, he sometimes represented interests opposed to his business clients.

In 1892 President Benjamin Harrison nominated Shiras to fill the vacancy on the Supreme Court left by the death of Justice Joseph P. Bradley. Like Bradley, Shiras was a Pennsylvania Republican, and convention dictated that Bradley's replacement be of similar political and geographic origin. Thus for political reasons Shiras was a good choice, even though he had no judicial or political experience. Strong opposition to the nomination came from the president's enemies. But support from powerful, private figures, including Andrew Carnegie, was ultimately persuasive.

" … to declare unlawful residence within the country to be an infamous crime, punishable by deprivation of liberty and property … [without] a judicial trial … is not consistent with the theory of our government."
—George Shiras Jr.

When Shiras joined the Court, the chief issue of the day was regulation of business. The Court was conservative, believing in the hands-off policy of laissez-faire economics. Shiras usually joined his fellow justices in voting to restrict antitrust and labor legislation. But he occasionally stood apart, as in Brass v. North Dakota, 153 U.S. 391, 14 S. Ct. 857, 38 L. Ed. 757 (1894), where he upheld state power to regulate. Moreover, he was committed to civil liberties. In Wong Wing v. United States, 163 U.S. 228, 16 S. Ct. 977, 41 L. Ed. 140 (1896), he wrote a landmark opinion extending basic rights to Chinese immigrants; it held that Congress had unconstitutionally allowed federal authorities to summarily sentence illegal Chinese Aliens to twelve months of hard labor without indictment or a jury trial.

In his lifetime, Shiras became notorious for having cast the swing vote to kill the first peacetime federal income tax. The tax, passed in 1894, was a popular response to the growing disparity in income levels caused by industrial growth. The case was pollock v. farmers' loan & trust, 158 U.S. 601, 15 S. Ct. 912, 39 L. Ed. 1108, decided in three parts in 1895. The final vote, on May 20, was 5–4 against. Critics vilified Shiras for apparently changing his mind from an earlier vote. For nearly three decades, his reputation suffered until, after his death, it was persuasively argued that another justice had provided the swing vote. Pollock led directly to the ratification of the Sixteenth Amendment in 1913, allowing Congress to levy a federal income tax.

Feedback
Flashcards & Bookmarks ?
Please log in or register to use Flashcards and Bookmarks. You can also log in with
Flashcards ?
My bookmarks ?
+ Add current page to bookmarks
References in periodicals archive ?
George Shiras III (or '3d,' as he preferred), who first hunted deer in the Upper Peninsula in 1869, would find the ambience of the 21stcentury deer camp warm and familiar.
George Shiras invented a progenitor of the trail camera at his deer camp on Whitefish Lake, about 20 miles east of Marquette.
In the course of his lifetime, George Shiras watched the Upper Peninsula wilderness and the inhabitants of its woods and water nearly vanish.
Along its western shore, the Conservancy has created the George Shiras III Discovery Trail to pay homage to his photography and conservation work.
George Shiras 3d camera hunter and conservationist
Brown Harrison 12/23/1890 of Michigan George Shiras Jr.
Supreme court nominations, 1789-2005: actions by the senate, the judiciary committee, and the president
George Shiras III described a mountain race of moose during his explorations in Yellowstone National Park, from 1908-1910.
History of moose management in Wyoming and recent trends in Jackson Hole
Legal browser ?
Full browser ?
CITE
Site: Follow: Share:
Open / Close