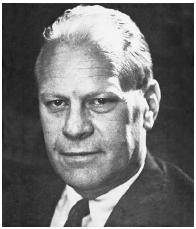 Without winning a single vote in a presidential election, Gerald Rudolph Ford became chief executive of the United States on August 9, 1974. Ford's ascent to the White House began on October 12, 1973, when he was appointed by President richard m. nixon to succeed Vice President Spiro T. Agnew. Agnew left office on October 10, 1973, after Pleading nolo contendere (I will not contest it) to felonious Tax Evasion. Ford was a popular Republican congressman from Grand Rapids, Michigan, and the minority leader of the U.S. House of Representatives. The Nixon administration was on the brink of collapse as evidence of its criminal involvement in the Watergate break-in and cover-up mounted. The scandal ultimately destroyed the Nixon White House, forcing the president to resign from office to avoid Impeachment.As a result, on August 9, 1974, Ford was sworn in as the nation's 38th president—and the first chief executive to be appointed to office.

Named Leslie Lynch King Jr., when born July 14, 1913, in Omaha, Nebraska, Ford spent most of his childhood in Grand Rapids, where his mother settled in 1914 after divorcing his father. When Ford was three years old, his mother remarried, and the future president was adopted by and renamed after his stepfather, Gerald Ford Sr.

Ford was a gifted athlete in high school and a college all-star on championship football teams at the University of Michigan. After graduating from Michigan in 1935, he turned down offers to play professional football and instead coached football and boxing at Yale University for five years. Ford attended Yale Law School during this time, and graduated in 1941 in the top third of his class.

After briefly practicing law in Grand Rapids, he enlisted in 1942 for a four-year tour with the Navy during World War II. When the war ended, Ford returned to Grand Rapids and reestablished his law practice. He married Elizabeth ("Betty") Bloomer Warren in 1948, and by 1957, the couple had four children. Ford was first elected to the U.S. House of Representatives from Michigan's Fifth Congressional District in 1948. He served in the House for 25 years, consistently winning reelection in his home district by 60 percent or more of the vote. A domestic affairs moderate and a fiscal conservative, Ford was assigned to the Public Works Committee during his first term in Congress. In 1951, he managed to transfer committees, and subsequently served on the influential House Appropriations Committee until 1965. Ford supported large defense budgets and a strong foreign policy, and opposed federal spending for several domestic social programs.

After the 1963 assassination of President john f. kennedy, Ford was selected to serve on the Warren Commission, a bipartisan task force set up to investigate Kennedy's murder. Later, Ford coauthored a book supporting the Warren Commission's report that Kennedy was killed by lone gunman Lee Harvey Oswald.

In 1963, Ford became chair of the House Republican Conference, and in 1964, he was named minority leader of the House of Representatives. At this stage in Ford's political career, his greatest ambition was to become Speaker of the House. However, because Congress was controlled by a majority of Democrats, Ford's goal was unattainable.

"Truth is the glue that holds our government together.… Our long national nightmare is over. Our Constitution works."
—Gerald R. Ford

Ford was a GOP loyalist who campaigned tirelessly for other Republican candidates. An accomplished fund-raiser, he was given credit for helping elect 47 new Republicans to the House of Representatives in 1966. In addition to campaigning and performing his congressional duties, Ford served as permanent chair of both the 1968 and 1972 Republican National Conventions. After the GOP's victory in the 1968 presidential election, Ford could be counted on to support vigorously Nixon's foreign and domestic programs in Congress.

When it became clear in 1973 that Vice President Agnew's legal and ethical problems would force him out of the Nixon White House, the president turned to Ford as a logical replacement. The Twenty-Fifth Amendment to the U.S. Constitution allows the president to nominate a vice president in the event of a vacancy. Ford was a plausible choice because of his solid track record in the House, his popularity with Congress and the public, and his loyalty to Nixon. After Agnew's resignation, Ford publicly accepted Nixon's offer and was confirmed by a majority vote of both houses of the U.S. Congress. He was sworn in during a joint session of Congress on December 6, 1973.

Ford knew that he was joining a doomed, scandal-plagued administration and that in all likelihood he would become president. For eight months, he performed his vice presidential duties and waited as the Watergate investigators closed in on Nixon. With Nixon's resignation inevitable, Ford prepared what he hoped would be a reassuring speech to his weary country. On August 9, 1974, the day Nixon resigned and Ford was sworn in, Ford spoke to the nation on television, telling citizens that the U.S. system worked and that "our long national nightmare is over."

At the beginning of Ford's term as president, members of Nixon's cabinet, including Secretary of State Henry Kissinger, agreed to stay on in the interest of continuity. Ford appointed Nelson A. Rockefeller, former governor of New York, to serve as his vice president. As the transition from Nixon to Ford was made, key Nixon appointees departed, and the Ford administration floundered.

The nation's economy was a pressing problem, with both inflation and unemployment running high. To combat inflation, Ford proposed a voluntary program, Whip Inflation Now (WIN), which was neither an economic nor a popular success. Without mandatory controls to keep prices and wages in check, the program was ineffective. Although other measures introduced by Ford eventually helped stabilize the economy, unemployment remained high, reaching more than nine percent in May 1975.

Clearly the most damaging event during Ford's two-and-a-half years in office occurred about a month after he was sworn in. On September 8, 1974, Ford granted Nixon a full pardon for any possible crimes committed during the Watergate cover-up. Although Ford pardoned Nixon out of compassion and a desire to move the nation from its Watergate paralysis, he suffered tremendously in the public opinion polls for his action. Many U.S. citizens opposed special treatment for Nixon, believing that the former president should be fully prosecuted for the crimes that toppled his administration. Some historians believe that Ford's unconditional pardon of Nixon cost him the 1976 presidential election.

Another misstep was Ford's Amnesty proposal for young men who had dodged the draft during the Vietnam War. Although the program did not offer automatic reentry into U.S. society—it did require two years of public service— it was unpopular with conservative groups and with the very men it was supposed to help. The amnesty program received applications from only 20 percent of eligible U.S. citizens and was discontinued after two years.

In foreign affairs, Ford continued Nixon's policies of détente with the Soviet Union and negotiations for a Middle East peace accord. Perhaps the most newsworthy event of international importance during Ford's term was the Mayaguez incident. When the U.S. merchant ship Mayaguez was seized off the coast of Cambodia in 1975, Ford sent in U.S. troops to retrieve the crew and ship. The operation was an unmitigated success for Ford because bloodshed was avoided and his leadership qualities were demonstrated in the international arena.

During his brief term, Ford made one U.S. Supreme Court appointment, nominating Justice John Paul Stevens, a moderate, to replace retiring Justice william o. douglas in 1975. Ford became the first U.S. president to travel to Japan on an official visit, in 1974, and the first chief executive to survive two assassination attempts.

Initially, Ford considered himself an interim president. As he grew accustomed to the White House, he changed his mind and decided to run for his party's presidential nomination in 1976. Although Ford was opposed at the Republican convention by California governor ronald reagan, he managed to win the nomination on the first ballot. He selected Senator bob dole, of Kansas, as his running mate.

jimmy carter, governor of Georgia and the 1976 Democratic presidential nominee, made personal integrity and honesty in government the central themes of his campaign. Carter criticized Ford's association with the tainted Nixon administration and stressed his own reputation for moral rectitude. In a tight race, Carter and running mate Walter F. Mondale, from Minnesota, won the election, receiving half the popular votes and 297 Electoral College votes.

In 1980, Ford was asked to run as Reagan's vice presidential candidate; he declined. Since then, he has remained in the public eye, lecturing at over 170 Colleges and Universities and speaking out on political issues via television documentaries and newspaper opinion pieces. He participates in many of the activities sponsored by the Gerald R. Ford Library in Ann Arbor, Michigan, and the Gerald R. Ford Museum in Grand Rapids, Michigan, which were established in 1981. Ford serves on the board of directors of a number of national corporations and charities, and has been the recipient of numerous honorary degrees and awards.

In 1999, President bill clinton awarded Ford the Presidential Medal of Freedom, the nation's highest civilian award, for guiding the nation through turbulent times. The same year, President and Mrs. Ford were awarded the Congressional Gold Medal for dedicated public service. Also, in 1999, the University of Michigan officially renamed its Institute of Public Policy Studies the Gerald R. Ford School of Public Policy.

Feedback
Flashcards & Bookmarks ?
Please log in or register to use Flashcards and Bookmarks. You can also log in with
Flashcards ?
My bookmarks ?
+ Add current page to bookmarks
Mentioned in ?
References in periodicals archive ?
During Ford's formative years, his mother, Dorothy Gardner Ford, molded his character and propensity for achievement, while stepfather Gerald Rudolph Ford Sr., set an example of devotion and strength tempered with kindness.
On December 6, 1973, Gerald Rudolph Ford's appointment as vice president was confirmed.
Gerald R. Ford America's "Public Man