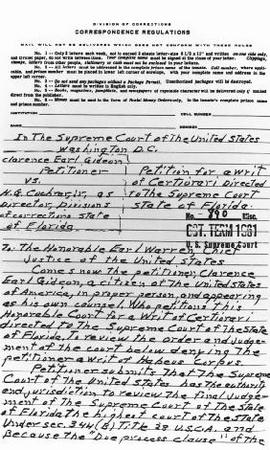 Clarence Earl Gideon's handwritten petition for a writ of certiorari filed with the U.S. Supreme Court in 1961.

In 1961, Clarence Earl Gideon was charged in a Florida state court with breaking into and entering a poolroom with intent to commit a misdemeanor, a combination of offenses that constituted a felony under Florida law. He could not afford a lawyer, and he requested to have one appointed by the court. Nearly twenty years earlier, the U.S. Supreme Court had held in Betts v. Brady, 316 U.S. 455, 62 S. Ct. 1252, 86 L. Ed. 1595 (1942), that an ordinary person could do an adequate job of defending himself or herself. A court-appointed lawyer was required only if the defendant had mental or physical deficiencies, the case was unusually complicated, or the case involved "special circumstances." None of these exceptions applied to Gideon, the Florida trial court ruled, and thus his request for counsel was denied.

Gideon conducted his own defense and was found guilty of the charges. He then filed a handwritten petition with the Supreme Court of Florida, seeking to overturn his conviction on the ground that the trial court's refusal to appoint an attorney for him denied him the rights "guaranteed by the Constitution and the Bill of Rights by the United States Government." The state supreme court denied Gideon's petition.

While in prison, Gideon, using law books available to him, drafted a petition for writ of certiorari to the U.S. Supreme Court. (The petition is the legal document in which a person requests the Supreme Court to hear an appeal. The Court has the discretion to accept or decline the appeal.) According to Anthony Lewis's acclaimed book on the case, Gideon's Trumpet (1964), in the handwritten petition Gideon stated that it "just was not fair" that he had no lawyer at his trial. The petition was granted, and Abe Fortas, who would later serve as an associate justice on the Court, was appointed to argue Gideon's case.

In a unanimous decision, the Supreme Court overruled Betts, holding the guarantee of counsel to be a fundamental right under the U.S. Constitution. The Court ruled that the due process clause of the Fourteenth Amendment required that the Sixth Amendment, which guarantees indigent defendants the Right to Counsel in federal criminal proceedings, be interpreted to include indigent defendants in state criminal trials. In his majority opinion, Justice hugo l. black wrote,"[R]eason and reflection require us to recognize that in our … system of criminal justice, any person hailed into court, who is too poor to hire a lawyer, cannot be assured a fair trial unless counsel is provided." Black further pointed out that the government hires attorneys to prosecute defendants, and individuals charged with crimes who are financially unable to hire attorneys to defend themselves, both "strong indications … that lawyers in criminal courts are necessities, not luxuries."

Gideon was later retried with a court-appointed lawyer representing him and was found not guilty.

Following Gideon, it was unclear whether the decision applied only to indigent defendants facing felony convictions and not to individuals charged with lesser crimes. Nine years later, that issue was clarified in Argersinger v. Hamlin, 407 U.S. 25, 92 S. Ct. 2006, 32 L. Ed. 2d 530 (1972). In Argersinger, the Supreme Court expanded its holding in Gideon, ruling that the Sixth Amendment right to appointed counsel extended to misdemeanor cases in which the person charged may face imprisonment, unless the defendant makes a "knowing and intelligent waiver" of his or her right to counsel. The Court concluded that an accused in a misdemeanor trial likewise has a strong need for representation and that Gideon should apply "to any criminal trial, where an accused is deprived of his liberty."

Argersinger was limited a few years later by Scott v. Illinois, 440 U.S. 367, 99 S. Ct. 1158, 59 L. Ed. 2d 383 (1979). In Scott, the Supreme Court held that the Sixth Amendment right to counsel extends only to cases where "actual imprisonment" is imposed, and not to cases where the "mere threat of imprisonment" exists (where the crime charged authorizes a possible jail sentence).