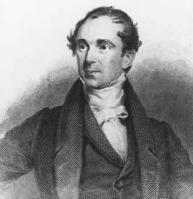 Henry Dilworth Gilpin served as attorney general of the United States from 1840 to 1841 under President Martin Van Buren. He was born April 14, 1801, in Lancaster, England. He and his parents, Joshua Gilpin and Mary Dil-worth Gilpin, boarded a ship for the United States in 1802. The Gilpins were aristocratic and socially prominent, not a struggling immigrant family. Gilpin's grandfather Thomas Gilpin was a manufacturer and businessman who had been shipping goods to U.S. harbors since colonial days. He was among those who helped to plan and execute the construction of the Chesapeake and Delaware Canal (which connects the head of Chesapeake Bay with the Delaware River estuary and thereby shortens sea routes to Baltimore from the north and from Europe). Gilpin's father, an author and poet with published works in both England and the United States, dabbled in a number of artistic and business ventures in the United States. He eventually settled in Pennsylvania, where he ran a successful papermaking business.

Gilpin was brought up near Philadelphia and was educated at the University of Pennsylvania. He graduated, as valedictorian of his class, in 1819 and began to study law with a local attorney. In 1822, he was admitted to the bar but he did not establish a practice. Instead, he went to work as an agent for the Chesapeake and Delaware Canal Company. The position allowed him to travel and to pursue the literary interests encouraged by his father. From 1826 to 1832, he wrote detailed accounts of his visits to Harper's Ferry, the Shenandoah Valley, Weyer's Cave, Natural Bridge, Lexington, Charlottesville, Fredericksburg, Washington, D.C., and other locations in the Atlantic and southern states. His writings were collected by his father and later published in a seven-volume work called Atlantic Souvenirs (1826–1832).

Gilpin's pedigree and business interests permitted him to mix with prominent citizens wherever he traveled. During this early period of travel, he met and married Eliza Johnson, of New Orleans. In 1826, he attended—and wrote a famous account of—President John Quincy Adams's inaugural ball and public reception. On subsequent trips to the nation's capital, he developed an interest in politics by writing profiles of men like Henry Clay, Daniel Webster, and Andrew Jackson.

Gilpin was a great admirer of Jackson and was active in Jackson's successful bid for the presidency in 1828. In appreciation for Gilpin's support, Jackson named him to the board of directors of the Second National Bank of the United States. The bank, located in Gilpin's hometown of Philadelphia, was established as the nation's central bank in 1816 during the financial crisis after the War of 1812. It had opened in 1791 and closed in 1811 after its renewal charter was successfully challenged by agricultural interests who were not served by the bank's commercial focus.

Like its predecessor, the Second National Bank had strong opposition. Jackson believed that it had become too powerful, and he wanted to diminish its influence by withdrawing federal funds and depositing the money in selected state banks. The Bank War, as the debate over the bank's role in the federal economy came to be called, was a central issue in Jackson's second presidential campaign. Jackson's re-election, along with the presence of his ally Gilpin on the board, ensured the bank's demise. Gilpin successfully pressed Jackson's arguments against the institution, and the renewal of the bank's charter was rejected. The bank closed in 1836 when its charter expired.

"I know few things more striking in the history of humankind than that kindling enthusiasm which, springing from one individual … sways the conduct of immense bodies of men."
—Henry Gilpin

Gilpin's willingness to act as Jackson's chief spokesman at the height of the Bank War resulted in his removal from the board in the bank's final years. To fill the void left by his removal, Gilpin renewed his interest in the Practice of Law, and from 1832 to 1835 he served as U.S. attorney for the Eastern District of Pennsylvania. He also pursued a number of land-investment and business opportunities in the Michigan Territory.

Jackson named Gilpin territorial governor of Michigan in 1835, but the president's opponents in Congress blocked the confirmation. It was not until President Van Buren was elected a year later that Gilpin returned to a role in the federal government.

Van Buren named Gilpin to be solicitor of the U.S. Treasury in 1837 and elevated him to serve as attorney general of the United States from 1840 to 1841. As in his early years, Gilpin continued to chronicle his experiences. The Gilpin Reports, published in 1837, and the Opinions of Attorneys-General of the United States, published in 1840, record his service to the Van Buren administration.

Gilpin's term as attorney general increased the demand for his legal services, and after leaving the cabinet, he devoted the last 20 years of his life to the practice of law. He also continued to oversee development of the Chesapeake and Delaware Canal Company, where he rose to the positions of secretary and director.

Gilpin retained a lifelong interest in politics and the Democratic Party and served as a delegate to the party's national convention in 1844. Gilpin tutored his younger brother, William, in the study of the law and was instrumental in launching the latter's political career. His brother went on to become the governor of Colorado.

Gray, Ralph D. 1968. "A Tour of Virginia in 1827. Letters of Henry D. Gilpin to his Father." Virginia Magazine of History and Biography.

——. 1975. "Henry D. Gilpin: Governor in and over the Territory of Michigan." Michigan History.