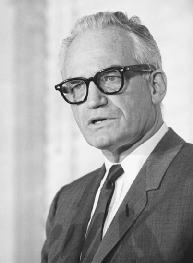 Barry Morris Goldwater was a former U.S. senator and presidential nominee. During almost 40 years in public life, he became the outspoken and controversial leader of the conservative wing of the Republican Party.

Goldwater was born January 1, 1909, in Phoenix, Arizona. His paternal ancestors were Orthodox Jewish innkeepers who emigrated from Poland in the mid-1800s to join the California gold rush. Goldwater's father, Baron Goldwater, managed the family's general store in Phoenix. This store was the humble beginning of what would become an enormously profitable chain, Goldwater's Department Stores. Goldwater's mother, Josephine Williams, was a nurse who raised Goldwater and his siblings in her Episcopalian faith. A woman who loved out-door activities, she took her children hiking and camping throughout Arizona and taught them the colorful history of the region. From her, Goldwater acquired an abiding love of the Southwest and a deep appreciation of its people and its beauty.

Goldwater was a mediocre student who preferred sports and socializing to studying. At Phoenix Union High School, he was elected president of his first-year class, but the principal advised his father that Goldwater should probably attend school elsewhere the following year. Against his strenuous objections, his parents sent him to Staunton Military Academy, in Virginia. There, he excelled at athletics and did better academically than anyone expected, being named best all-around cadet in 1928.

Goldwater loved the military and dreamed of attending West Point. But when he graduated from Staunton, his father was in ill health, and Goldwater instead enrolled at the University of Arizona, at Tucson, to be near his home. His father died before he had finished his first year in college. Goldwater left school a year later to enter the family business.

With his father gone, Goldwater turned to an uncle for advice and direction. He quickly worked his way up from junior clerk, to general manager in 1936, and to president in 1937. Under his leadership, Goldwater's became Phoenix's premier department store and leading specialty shop. Goldwater pioneered the five-day workweek and instituted many progressive fringe benefits for his employees, including health and life insurance, profit sharing, and use by employees of a vacation ranch. Also, Goldwater's was the first Phoenix store to hire African Americans as salesclerks.

Goldwater entered politics in 1949 when he was elected to the Phoenix City Council as a reform candidate. He was surprised to find that he loved politics. In 1950, he managed Howard Pyle's successful campaign for governor of Arizona. In 1952, he was elected to the U.S. Senate on the strength of voter dissatisfaction with Democratic president harry truman and the Korean War. Elected as a Republican, Goldwater described himself as "not a me-too Republican" but one "opposed to the superstate and to gigantic, bureaucratic, centralized authority." He quickly developed a reputation for "outspoken unreliability" because even his Republican colleagues could not predict what he might say.

A maverick who spoke his mind regardless of consequences, Goldwater was the personification of the Western ideal of rugged individualism. He opposed any intrusion by the federal government in what he considered to be the state's domain. While in the Senate, he consistently opposed federal spending for social programs, argued that contributions to Social Security should be voluntary, and contended that medical programs for poor and elderly people would lead to socialized medicine. "I do not undertake to promote Welfare, for I propose to extend freedom," he said. Throughout his career, Goldwater sought to reduce the role of government in citizens' lives by eliminating unnecessary laws and social programs.

One of Goldwater's most controversial actions in the Senate was his staunch defense of Senator joseph r. mccarthy, a notorious Communist hunter whose committee, through innuendo and guilt by association, ruined the lives and careers of many U.S. citizens by labeling them Communists or Communist sympathizers. Goldwater was criticized for trying to forestall a Senate vote on censuring McCarthy and then voting against the censure.

In 1958, Goldwater was easily reelected to the Senate despite a concerted campaign to defeat him by organized labor, a group he distrusted and criticized. By that time he had established himself as the outspoken leader of conservative Republicans. His statements were frequently off-the-cuff, sometimes contradictory, and always quotable. He has been credited with saying that Walter P. Reuther, a labor movement leader, was a bigger threat than the Communists; that Supreme Court chief justice Earl Warren, noted for his liberal opinions, was a socialist; and that Cuban premier Fidel Castro was just another Communist who needed a shave. He was notoriously disdainful of what he called the Eastern establishment, who, according to him, were elitist and out of touch with the rest of the United States. He supported a strong military, and opposed efforts to lower defense spending and increase social spending. His detractors scoffed at him, but his followers were fiercely devoted, perhaps because his nonintellectual, candid style reflected their own values.

While in the Senate, Goldwater befriended john f. kennedy, and, though they disagreed vehemently, they remained close friends until Kennedy's death. Goldwater had hoped to run against Kennedy in 1964; the two had discussed the possibility of traveling the country together on an old-fashioned debating tour. When Kennedy was assassinated, Goldwater lost his desire to run. He felt he could not beat lyndon b. johnson. Nonetheless, supporters persuaded him to run.

At the 1964 Republican convention in San Francisco, Goldwater was unanimously nominated after an intense floor fight. In his acceptance speech, he uttered the words that would haunt him during the coming campaign and paint him, perhaps unfairly, as a one-dimensional warmonger. "I would remind you," he said, "that extremism in the defense of liberty is no vice.And let me remind you also that moderation in the pursuit of justice is no virtue." Johnson and the Democrats blasted Goldwater as a trigger-happy extremist who was willing to drop bombs whenever and wherever necessary to defend the interests of the United States.

Capitalizing on the country's growing unease with the war in Vietnam, the Johnson campaign developed a television commercial that many feel ushered in a new era of negative campaign advertising. The commercial showed a young girl standing in a field plucking petals from a daisy. A background voice recited an ominous countdown. Finally, the child evaporated in a mushroom cloud, and viewers were urged to vote for Johnson because, "The stakes are too high for you to stay home." Goldwater acknowledged later that the Johnson campaign effectively exploited the public's fear of his militancy. "In fact," he said with sardonic wit, "if I hadn't known Goldwater, I'd have voted against the s.o.b. myself."

Goldwater was defeated by Johnson in a landslide, carrying only Arizona and five southern states. He was unapologetic about his "extremism" speech, saying, "Protecting freedom is what this country has been about. We'll go to any extent to protect it. I know people were thinking 'nuclear' when I said [extremism,] but … I think it had to be said, and I never lost any sleep over it." The final irony, of course, is that Johnson escalated the war in Vietnam, and it dragged on until 1973. According to Goldwater, Johnson's Vietnam policy cost the country far more money and lives than if Goldwater, the supposed warmonger, had been elected.

After his loss to Johnson, Goldwater returned to Arizona and private life. Although his defeat was stunning, and he was treated like a pariah by other Republicans, he was undaunted. "Politics has never been the making or breaking point of my life," he said."I worked hard to make Arizona a better state and my country a better country. If I failed, I've taken the criticism." He returned to politics in 1968 when he easily won the Senate seat vacated by retiring Democrat Carl Hayden. As an older and somewhat more moderate statesman, he relished his positions as chair of the Armed Services Committee, the Intelligence Committee, the Communications Subcommittee, and the Indian Affairs Committee. He continued to work against big government and in favor of a free market economy. Summing up his opposition to federal control, he said, "All the great civilizations fell when people lost their initiative because government moved in to do things for them."

Goldwater served in the Senate for almost twenty additional years and left with his reputation and his convictions intact. "I was luckier than hell—politics is mostly luck—and I made a lot of friends," he said. "It would be hard for me to name an enemy in Congress. People disagreed with me violently, but we remained very good friends." In addition to a loyal conservative following, Goldwater's friends included liberal Democrats Morris Udall, Daniel Inouye, edward m. kennedy, Walter F. Mondale, and hubert h. humphrey. One conservative Goldwater removed from his list of friends was richard m. nixon. Unable to accept Nixon's failings or forgive his deceptions during the Watergate crisis, Goldwater called the scandal "one of the saddest moments of my life. For twenty years or so, he and I worked hand in glove all over this land—not to help Nixon, not to help Goldwater, but to help the Republican Party and our country. But I was slow to see the real Nixon."

Goldwater retired from the Senate when his term ended in 1987 and returned to his home in Paradise Valley, Arizona, overlooking Phoenix. He remained active, although slowed somewhat by arthritis. In the 1990s, he took up an unlikely new cause: gay rights. "The big thing is to make this country … quit discriminating against people just because they're gay," he asserted. "You don't have to agree with it, but they have a constitutional right to be gay. And that's what brings me into it." Always a strict constructionist when it came to the Constitution, Goldwater felt that his defense of gay rights was consistent with his lifelong devotion to individual freedom. Then governor of Oregon Barbara Roberts said that because people do not expect someone like Goldwater to speak up for gay rights, they look at the issue in a new light when he does. "He causes people to focus on the real issue," she said."Should the country that celebrates life, liberty and the pursuit of happiness allow discrimination for a group of Americans based on sexual preference?" Goldwater's position on gay rights put the former conservative standard-bearer squarely in conflict with religious conservatives who opposed any effort to outlaw discrimination against homosexuals.Goldwater died at the age of 89 on May 29, 1998. He was a member of many organizations, including the Royal Photographic Society, the American Association of Indian Affairs, and the Veterans of Foreign Wars. He was honorary cochairman of Americans against Discrimination, a Lobbying effort aimed at securing gay rights. He and his second wife, Susan Goldwater, lived in Paradise Valley, Arizona, at the time of his death.

Perlstein, Rick. 2001. Before the Storm: Barry Goldwater and the Unmaking of the American Consensus. New York: Hill & Wang.