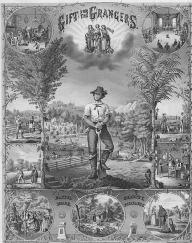 An 1873 Granger promotional poster printed in Cincinnati, Ohio. The Granger Movement experienced rapid growth following the Panic of 1873 and peaked by 1875.

The Granger Movement was begun in the late 1860s by farmers who called for government regulation of railroads and other industries whose prices and practices, they claimed, were monopolistic and unfair. Their efforts contributed to a growing public sentiment against monopolies, which culminated in the passage of the Sherman Act (or Sherman Anti-Trust Act) of 1890, 15 U.S.C.A. §§ 1–7.

In 1867, the American farmer was in desperate straits. Needing better educational opportunities and protection from exorbitant prices charged by middlemen, the farmers decided to form an independent group to achieve their goals. Oliver Hudson Kelley, a former employee of the Agriculture Department, organized a group called the Patrons of Husbandry. Membership was open to both men and women, and each local group was known as a Grange. Each Grange chose officers, and the goal of each meeting was to present news of educational value to the farmer.

Kelley traveled across the country establishing Granges; he found his greatest support in Minnesota. The Granges soon evolved into the national Granger Movement. By 1873, all but four states had Granges.

The main problems confronting the Granger Movement concerned corporate ownership of grain elevators (used for the storage of crops) and railroads. These corporations charged high prices for the distribution and marketing of agricultural goods, and the farmer had no recourse but to pay. By 1873, the movement was becoming political, and the farmers formed an alliance, promising to support only political candidates who shared the interests of farmers; if that failed, they vowed to form their own parties.

Granger-supported candidates won political victories, and, as a result, much legislation protective of their interests was passed. Their biggest gain occurred in 1876, when the U.S. Supreme Court decreed in munn v. illinois, 94 U.S. (4 Otto.) 113, 24 L. Ed. 77, that states had the right to intervene in the regulation of public businesses. The law affected the prices of elevator charges, grain storage, and other services vital to the livelihood of the farmers.

In addition to political involvement, the Grangers established stores and cooperative elevators and employed the services of agents who secured special prices for the Grangers. These endeavors were not as successful as their previous undertakings, and the attempt to manufacture farm machinery depleted the finances of the movement. As a result, the Granger Movement began to wane in 1876.

Feedback
Flashcards & Bookmarks ?
Please log in or register to use Flashcards and Bookmarks. You can also log in with
Flashcards ?
My bookmarks ?
+ Add current page to bookmarks
References in periodicals archive ?
The Granger movement. Cambridge: Yale University Press.
Indefinite foundings and awkward transitions: the Grange's troubled formation into an educational institution
The rise of Greenback and Granger movements in the county after the war, for example, grew from older concerns about the power of capital over agriculture.
A Generation at War: The Civil War Era in a Northern Community
Legal browser ?
Full browser ?
CITE
Site: Follow: Share:
Open / Close