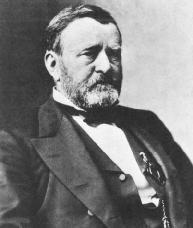 Ulysses Simpson Grant, originally known as Hiram Ulysses Grant, was a U.S. general, the commander of the Union army during the last part of the Civil War, and the president of the United States from 1869 to 1877. During his presidency Grant's reputation was tarnished by political corruption and scandal in his administration. Though he was never personally involved with any scandal, his failure to choose trustworthy advisers hurt his presidency.

Grant was born April 27, 1822, in Point Pleasant, Ohio. Raised in nearby Georgetown, he was educated at local and boarding schools. In 1839 he accepted an appointment to the Army's military academy at West Point, though he did not intend to become a soldier. The appointment allowed him to obtain the education he could not afford otherwise. He graduated in 1843 and began his military career with a tour of duty during the Mexican War of 1846–48, in which he distinguished himself in battle. After the war he was assigned to Fort Humboldt, California. During his time in California, Grant became lonely, and it has been alleged he had a drinking problem. He resigned his commission in 1854 and made several unsuccessful attempts at alternative careers, including farming and real estate. In 1860 he moved to Galena, Illinois, where he worked in his father's leather goods store.

With the outbreak of the Civil War in 1861, Grant returned to the military as a colonel in the Illinois Volunteers. He soon was promoted to brigadier general. Grant's first major victory came in February 1862, when his troops captured Forts Henry and Donelson, Tennessee, forcing General Simon B. Buckner, of the Confederacy, to accept unconditional surrender. As a result Grant was promoted to major general. Grant fought in the Battles of Shiloh and Corinth before forcing the surrender of Vicksburg, Mississippi, on July 4, 1862. In 1863 his forces triumphed over those of General Braxton Bragg, of the Confederacy, at Chattanooga, Tennessee.

Grant's leadership was welcomed by President Abraham Lincoln, who had endured a succession of commanders of the Union army who refused to wage an aggressive war. In March 1864 Lincoln promoted Grant to lieutenant general and gave him command over the entire Union army. In that year Grant scored another major military triumph. He commanded the Army of the Potomac against the forces of General Robert E. Lee, of the Confederacy, in the Wilderness Campaign, a series of violent battles that took place in Virginia. Battles at Spotsylvania, Cold Harbor, Petersburg, and Richmond produced heavy Union casualties, but Lee's smaller army was devastated. On April 9, 1865, at Appomattox Courthouse, Lee surrendered his forces, signaling an end to the Civil War.

After the war Grant enforced the Reconstruction laws of Congress in the Southern military divisions. President Andrew Johnson appointed him secretary of war in 1867, but Grant soon had a falling out with the president. Grant aligned himself with the Republican Party and became its presidential candidate in 1868. He defeated Democrat Horatio Seymour, former governor of New York, by a small popular vote margin. At age forty-six, he was the youngest man yet elected president. He was reelected in 1872, easily defeating Horace Greeley.

Though Grant's intentions were good, it soon became clear that his political and administrative skills did not match his military acumen. Despite his interest in civil service reform, he followed his predecessors in using political patronage to fill positions in his administration. Many of his appointees were willing to use their office for personal profit.

Grant's reputation was first tarnished in 1869 when financiers Jay Gould and James Fisk attempted to corner the gold market and drive up the price. Their plan depended on keeping the federal government's gold supply off the market. They used political influence within the Grant administration to further their scheme. When Grant found out about it, he ordered $4 million of government gold sold on the market. On September 24, 1869, known as Black Friday, the price of gold plummeted, which caused a financial panic.

During Grant's second term, more scandal erupted. Vice President Schuyler Colfax was accused of taking bribes in the Crédit Mobilier scandal, which involved a diversion of profits from the Union Pacific Railroad. And Grant's private secretary, Orville E. Babcock, was one of 238 persons indicted in the Whiskey Ring conspiracy, which sought to defraud the federal government of liquor taxes. Babcock was acquitted after Grant testified on his behalf. Finally, Grant accepted the resignation of Secretary of War William W. Belknap shortly before Belknap was impeached on charges of accepting a bribe.

In domestic policy Grant attempted to resolve the tensions between North and South. He supported Amnesty for Confederate leaders, and he tried to enforce federal Civil Rights legislation that was intended to protect the newly freed slaves. In foreign policy he settled longstanding difficulties with Great Britain, in the 1871 Treaty of Washington.

After leaving office in 1877, Grant spent his time traveling and writing. He made a world tour in 1878 and 1879. In 1880 he unsuccessfully sought the Republican party's nomination for president. In 1881 he bought a home in New York City and became involved in the investment firm of Grant and Ward, in which his son, Ulysses S. Grant, Jr., was a partner. He invested his personal fortune with the firm and encouraged others to invest as well. In 1884 the firm collapsed. Partner Ferdinand Ward had swindled all the funds from the investors. Grant was forced to file for Bankruptcy.

"The war is over—the rebels are our countrymen again."
—Ulysses S. Grant

Needing money, Grant contracted with his friend Mark Twain to write his memoirs. Despite the debilitations of throat cancer, Grant was able to complete his Personal Memoirs shortly before his death on July 23, 1885, in Mount McGregor, New York. His memoir was well received and is now recognized as a classic military autobiography. Grant and his wife, Julia Dent Grant, are buried in Grant's Tomb, in New York City, which was proclaimed a national memorial in 1959.