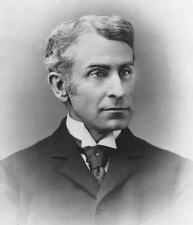 John William Griggs was a prominent New Jersey lawyer and politician who served as attorney general of the United States under President William McKinley.

As a young man, Griggs attended the Collegiate Institute, in Newton. He later entered Lafayette College, and graduated in 1868. After college, he studied law in Newton with Representative Robert Hamilton, of New Jersey, and Socrates Tuttle. Griggs completed his legal studies in 1871 and entered into practice with Tuttle.

In 1874, Griggs was established well enough to marry Carolyn Webster Brandt, the daughter of a successful Newton businessman. They had three children.

Griggs's early association with Congressman Hamilton sparked a lifelong interest in politics. While working for Hamilton, Griggs established himself as an able campaigner and gifted speech maker. By 1874, Griggs had decided to stop campaigning for others and to throw his own hat into the ring. In 1875, he was elected to the New Jersey Assembly, the lower house of the New Jersey Legislature, where he became chairman of the Committee on the Revision of the Laws. Griggs's special area of expertise was the laws governing elections. He returned to the assembly for a final term in 1877.

At the end of his final term, Griggs opened a law office in Paterson, New Jersey, and resolved to take a break from politics. His resolve was short-lived. In 1879, he was appointed to the Board of Chosen Freeholders of Passaic County, and he served as legal counsel to the city of Paterson from 1879 to 1882.

In 1882, Griggs was elected to the first of two terms in the New Jersey state senate. He served as president of the senate in 1886, and in that capacity presided over several high-profile Impeachment trials resulting from allegations of corruption in state government.

As a state senator, Griggs worked to pass legislation forcing railroads and other large corporations to bear a larger share of the state's tax burden. He was known as a centrist who moderated many of the radical measures proposed by New Jersey's liberal Democratic governor Leon Abbett.

Griggs was a delegate to the Republican National Convention of 1888, and he worked actively to further the political agenda of presidential candidate Benjamin Harrison.After the election, he was among those considered for a Supreme Court nomination by President Harrison. When the nomination did not materialize, Democratic governor George Theodore Werts offered him a seat on New Jersey's highest court. Historians have speculated that Griggs discouraged the Supreme Court nomination, and declined appointment to the New Jersey high court, because of his wife's ill health. She died in 1891.

In 1893, Griggs married Laura Elizabeth Price, with whom he eventually had two children. With the support of his new wife and of campaign manager Garret A. Hobart, Griggs made a run for the governor's office in 1894. In 1895, he became the first Republican to be elected governor of New Jersey since the Civil War.

The victory brought Griggs to national prominence. In 1898, he resigned his office to accept President McKinley's appointment as attorney general of the United States.

As attorney general, Griggs rendered early opinions on the controversial practice of presidential Impoundment, which is an action or failure to act by the president that effectively prevents the use of congressionally appropriated funds and thereby thwarts the effectiveness of legislation that should have been funded. Griggs advised the president to look beyond a bill's specific language and consider the intent of Congress in determining whether an expenditure of funds was mandatory or discretionary. Upon examination of intent, Griggs often counseled against impoundment (see 22 Op. Att'y Gen. 295, 297 [1899]).

Griggs's work with a body of litigation known as the Insular cases established some of the guiding principles of International Law by defining geographic limits to the protections afforded by the U.S. Constitution. (The Insular cases concerned disputes involving the island possessions of the U.S. government.)

Because of his expertise in the field of international law, Griggs was among the first members appointed to the Permanent Court of Arbitration at The Hague. He served, when called on, from 1901 to 1912. While on the court, he also maintained a law practice in New York City and was involved in many lucrative business ventures. Griggs served as president of the Marconi Wireless Telegraph Company prior to its dissolution, and he was general counsel and director of the Radio Corporation of America at the time of his death in New York City on November 28, 1927.