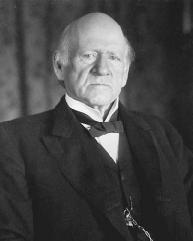 John Marshall Harlan served as an associate justice of the U.S. Supreme Court from 1877 to 1911. Harlan, a native of Kentucky, is best remembered for his dissenting opinions in cases that upheld restrictions on the Civil Rights of African Americans, most notably in Plessy v. Ferguson, 163 U.S. 537, 16 S. Ct. 1138, 41 L. Ed. 256 (1896). Harlan's dissents served to enlarge his judicial reputation as attitudes and laws changed concerning state-mandated Segregation.

Harlan was born in Boyle County, Kentucky, on June 1, 1833. The son of a prominent lawyer and politician, Harlan graduated from Centre College and then studied law at Transylvania University, both located in Kentucky. He was admitted to the Kentucky bar in 1853. As a young man, Harlan sought his own political career. He was elected a county judge in 1858, but relocated to Louisville in 1861 to establish a successful law practice.

With the beginning of the Civil War in 1861, Harlan joined the Union army as a lieutenant colonel and commanded a company of infantry volunteers. Upon the death of his father, he resigned his commission and returned to his law practice in Louisville. There, he became an active member of the Republican Party.He made two unsuccessful efforts at getting himself elected governor of Kentucky, but proved more successful at helping others, securing the presidential nomination of rutherford b. hayes at the 1876 Republican National Convention.

Hayes took office in 1877, after a difficult election. One of his first acts was to appoint Harlan to the U.S. Supreme Court. Harlan, at age forty-four, joined a Court that, for the length of his tenure, was economically conservative and philosophically opposed to the enlargement of federal power. In addition, the Court deferred to the policies of southern states on racial segregation.

During his long tenure on the bench, Harlan gained prominence as a frequent dissenter. With a temperament that was better suited to leading than following, Harlan did not have the ability to negotiate compromise. Instead, he relied on his dissenting opinions to voice his often prophetic judgments.

In pollock v. farmers' loan & trust co., 157 U.S. 429, 15 S. Ct. 673, 39 L. Ed. 759 (1895), the Court held that the federal Income Tax was unconstitutional. Harlan dissented, arguing that the Court was ignoring precedent and acting as a legislator rather than a court. He noted that "the practical effect of the decision today is to give to certain kinds of property a position of favoritism and advantage." Harlan was vindicated in 1913 when the Sixteenth Amendment overturned Pollock and authorized Congress to impose a federal income tax.

In 1883, the Supreme Court struck down Congress's attempt to outlaw racial discrimination in places of public accommodation, including hotels, taverns, restaurants, theaters, streetcars, and railroad passenger cars. The majority decided in the Civil Rights Cases, 109 U.S. 3, 3 S. Ct. 18, 27 L. Ed. 835 (1883), that the civil rights act of 1875 violated the Fourteenth Amendment. It determined that the amendment prohibited only official, state-sponsored discrimination and could not reach discrimination practiced by privately owned places of public accommodation.

Justice Harlan, in his dissent, argued that segregation in public accommodations was a "badge of slavery" for the recently freed African Americans, and that the act could be constitutionally justified by looking to the Thirteenth Amendment. This amendment gave Congress the authority to outlaw all "badges and incidents" of Slavery. Harlan pointed out that before the Civil War, the Supreme Court protected the rights of slaveholders. Less than twenty years after the Abolition of slavery, the Court refused to extend its power and authority to protect the former slaves. Not until the passage of title II of the Civil Rights Act of 1964 (42 U.S.C.A. § 2000a et seq.) would the federal government ultimately achieve the desegregation of public accommodations.

Harlan's most famous dissent came in Plessy. At issue in this case was an 1890 Louisiana law that required passenger trains operating within the state to provide "equal but separate" accommodations for "white and colored races." The Supreme Court upheld the law on a 7–1 vote, thus putting a stamp of approval on all laws that mandated racial segregation. In his majority opinion, Justice henry b. brown concluded that the Fourteenth Amendment "could not have intended to abolish distinctions based upon color, or to enforce social, as distinguished from political, equality."

Justice Harlan, the lone dissenter, responded that the "arbitrary separation of citizens on the basis of race" was equivalent to the imposition of a "badge of servitude" on African Americans. He cut through the legal arguments to proclaim that the real intent of the law was not to give equal accommodations but to compel African Americans "to keep to themselves." He concluded that this was unacceptable because "our Constitution is color-blind, and neither knows nor tolerates classes among citizens."

Sixty years later, Harlan's vision was embraced by the Supreme Court in brown v. board of education, 347 U.S. 483, 74 S. Ct. 686, 98 L. Ed. 873 (1954), when it overturned Plessy and rejected the "separate-but-equal" doctrine. With Brown, the modern Civil Rights Movement gained its first major victory, setting the stage for the dismantling of the Jim Crow Laws, which had required racial discrimination in the South.

"Our constitution is color-blind, and neither knows nor tolerates classes among citizens. In respect of civil rights, all citizens are equal before the law."
—John Marshall Harlan

Justice Harlan also taught Constitutional Law at Columbian University (now George Washington University) and served on the Bering Sea Arbitration Tribunal of 1893, which resolved a dispute between the United States and Great Britain over the hunting of seals inhabiting the Bering Sea area of Alaska.Harlan died October 14, 1911. His grandson, john marshall harlan ii, also served on the Supreme Court.