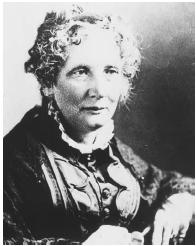 Harriet Beecher Stowe, author of one of America's most famous and popular books, helped to strengthen the Abolition movement by bringing white Americans and people around the world to the realization of the cruelties and misery endured by black slaves in the 1850s. Her book, Uncle Tom's Cabin, was one of the biggest sellers of the nineteenth century, second only to sales of the Bible. Since its publication, the book has never been out of print.

Stowe was born June 14, 1811, in Litchfield, Connecticut. She was the seventh child of prominent Congregationalist minister Lyman Beecher and his wife Roxana Foote Beecher, who died when Harriet was five. The Stowes grew up in an environment steeped in a Protestant tradition that demanded living a pious and moral life. Stowe's younger brother, Henry Ward Beecher, eventually became one of the country's most famous preachers and a major leader of the abolition movement. Her sister, Catharine, established several schools for young women throughout the United States.

Stowe attended Catharine's Hartford Female Seminary, one of the only schools open to young women at the time. She received an excellent education, and blossomed as a writer under her sister's tutelage. In 1832, she accompanied her sister and father to Cincinnati, Ohio, where Catharine opened another school and their father became president of Lane Theological Seminary. The following year, in 1833, Stowe coauthored and published her first book—a children's geography—under her sister's name.

"Women are the real architects of society."
—Harriet Beecher Stowe

In 1834, Harriet Beecher married widower Calvin Stowe, a poorly paid professor of biblical literature at Lane. During the first seven years of her marriage, Stowe bore five of the seven children they would ultimately have. In order to support their rapidly expanding family, she began writing magazine articles, essays, and other works. In 1843, Stowe published a collection of short stories called The Mayflower. During the 18 years she lived in Cincinnati, Stowe became an observer of the conflicting worlds of abolitionism and Slavery. Across the Ohio River was the slave state of Kentucky. Stowe's family helped to hide runaway slaves. Her husband and brother aided one runaway by transporting her to the next station on the Underground Railroad, the name given to the system of guides and safe houses that enabled escaped Southern slaves to reach freedom and safety in Northern states and Canada. Stowe was engrossed by firsthand accounts and newspaper and magazine articles detailing the horrors of the slave trade and the terrifying incidents that took place as slaves tried to escape.

In 1850, Calvin Stowe got a teaching position at Bowdoin College and the Stowe family moved to Brunswick, Maine. It was there that Stowe penned most of her soon-to-be classic. In 1851–1852, The National Era, an antislavery paper based in Washington, D.C., published in serial form, Stowe's moving account of several members of a slave family and their desperate attempt to flee from a system that rendered them the property of white owners. Stowe's narrative struck an immediate chord. Despite the newspaper's small circulation, word of mouth and the passing of issues among neighbors immediately gave Stowe's tale a larger audience.

In March 1852, her story was published as Uncle Tom's Cabin, or, Life Among the Lowly. The book became an immediate best-seller with sales reaching 500,000 copies by 1857. With its dramatic narrative and heart-rending scenes of the slave Eliza fleeing across a frozen river with her small son in her arms to prevent him from being sold away from her, Stowe's book helped sway much of the public to support, or at least sympathize with, the abolitionist cause. While many Southerners criticized the book, Stowe's harrowing tale gained an increasingly wider audience. Stowe used her newfound renown to speak and write against slavery. In particular, she urged women to become active and to use their powers of persuasion to influence others on the subject.

Although none of her later writings had the impact of Uncle Tom's Cabin, Stowe continued to write numerous stories, essays, and articles. Between 1862 and 1884 she published almost one book per year. Stowe died on July 1, 1896, in Hartford, Connecticut.