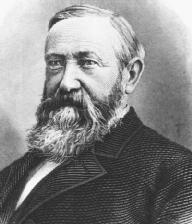 On March 4, 1889, Benjamin Harrison was sworn in as the twenty-third president of the United States. Forty-eight years to the day earlier, his grandfather, william h. harrison,had become the ninth U.S. president. His grandfather's presidency ended after only one month when he died from complications due to a pneumonia he developed after delivering his inaugural address in the rain. Harrison's presidency lasted a full four-year term, ushering in sweeping legislative changes, signaling a return of the Republican Party to the White House, and laying the groundwork for the foreign policy of the late 1800s.

Harrison was born August 20, 1833, in Ohio. After graduating from Miami University, in Oxford, Ohio, he moved to Indianapolis to practice law. There he became involved in Republican politics, serving as city attorney, secretary of the Republican state committee, and supreme court reporter for Indiana. During the Civil War, he joined the Union Army. Within a month he was promoted to colonel and commanding officer of the Seventieth Indiana Regiment. He fought under General William T. Sherman and was promoted to brevet brigadier general in February 1865. After the war he returned to Indianapolis to pursue his legal career.

Harrison lost the race for governor of Indiana in 1876, but made a successful bid for a Senate seat in 1881. He held his Senate position for only one term, failing to win reelection in 1887. This loss did not deter ardent Republican supporters who wanted to see Harrison in the White House.

In 1888 Harrison ran against the incumbent Democratic president, grover cleveland. Harrison was the surprise nominee of the Republican party, a second choice after James G. Blaine, who declined to run again after having lost to Cleveland in 1884. Following a very close race, Harrison won 233 electoral votes; although Cleveland took the popular vote, he won only 168 electoral votes. "The bottom principle … of our structure of government is the principle of control by the majority. Everything else about our government is appendage, it is ornamentation."
—Benjamin Harrison

In the 1888 election, the Republican party gained control of Congress. During the first two years of Harrison's presidency, Congress enacted into law almost everything contained in the 1888 Republican platform. This was one of the most active Congresses in history. The central themes of Harrison's campaign had been nationalism and tariff protection. The Democrats favored tariff reduction, whereas the Republicans stead-fastly favored a system of protection. The tariff existing at the time Harrison took office produced more income than was needed to run the government and was the cause of much bipartisan debate. In 1889 Harrison signed the McKinley Tariff Act, which raised Customs Duties to an average of 49.5 percent, higher than any previous tariff. The act contained over four hundred amendments, including provisions for reciprocal trade agreements. It found favor with few Republicans, causing a rift within the party. One issue in Harrison's term that enjoyed bipartisan support was antitrust legislation. During the late 1800s, business combinations known as trusts were created and began taking over large shares of the market. Both Republicans and Democrats perceived trusts as destructive of competition, and each party's platform was antimonopoly in 1888. In 1889 Senator John Sherman introduced antitrust legislation to restrain interstate trusts. On July 2, 1889, Harrison signed the Sherman Anti-Trust Act into law. This was the first major piece of legislation enacted during his term, and it remains in effect more than one hundred years after its adoption. Historians view the Sherman Anti-Trust Act as the most important piece of legislation of the Fifty-first Congress.

During Harrison's term legislation providing for federal supervision of all congressional elections was defeated several times. The legislation had been drafted to ensure the voting rights of blacks as mandated by the Fifteenth Amendment. Harrison was a strong supporter of the bill and also of legislation to ensure education for southern blacks, which was also defeated. These were the last significant attempts to provide these Civil Rights until the 1930s.

With regard to foreign policy, Harrison had an aggressive attitude and little patience for drawn-out diplomatic negotiations. He helped convince several European countries to lift their restrictions on the importation of U.S. pork products, thus increasing U.S. exports of pork from approximately 47 million pounds in 1891 to 82 million pounds in 1892. Harrison also played a part in solving disputes between the United States, England, and Canada regarding seal hunting in the Bering Sea. And his tenacity proved successful in avoiding a war with Chile in 1892. Harrison's attitude toward foreign relations was emulated by Theodore Roosevelt and other politicians.

When Harrison sought reelection in 1892, Cleveland once again opposed him. This time Cleveland emerged the victor.

Harrison has been described as an aloof loner, lacking in personal magnetism, but a man of great intellect. After he failed to secure a second term as president, he was revered as an elder statesman, giving lectures and acting as chief counsel for Venezuela in a boundary dispute with British Guiana.

After a bout with pneumonia, Harrison died March 13, 1901, in Indianapolis, Indiana.