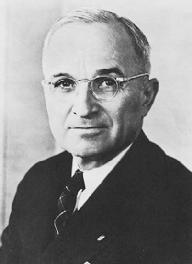 Harry S. Truman served as the thirty-third president of the United States from 1945 to 1953. Truman, who became president upon the death of President franklin d. roosevelt on April 12, 1945, made some of the most momentous decisions in U.S. history, including the dropping of atomic bombs on Hiroshima and Nagasaki, Japan, the rebuilding of Europe under the Marshall Plan, and the fighting of the Korean War. A defender of Roosevelt's New Deal domestic programs, in 1948 Truman fought unsuccessfully for a federal Civil Rights law that would have outlawed racial discrimination in employment. Though Truman was unpopular when he left office, by the 1960s his reputation had rebounded dramatically. Many political historians consider him one of the greatest U.S. presidents.

Truman was born on May 8, 1884, in Lamar, Missouri, the son of a farmer and mule trader. After graduation from high school in Independence, Missouri, in 1910, Truman held a succession of jobs. During World War I, he entered the U.S. Army and distinguished himself as a captain of a gunnery unit during fighting in France. After the war Truman's career choices did not improve. He became a partner in a men's clothing store but lost his savings when the business went bankrupt in the postwar economic depression.

At that point Truman entered politics, developing an association with Thomas J. Pendergast, the Democratic leader who ran Kansas City and Jackson County, Missouri. With Pendergast's backing, Truman became a county judge in 1922, at a time when a law degree was not required to be a judge. Truman proved an able judge and administrator, but anti-Pendergast forces defeated him in 1924. He was reelected to the judgeship in 1926, however, and served until 1934. During this period Truman studied law at the Kansas City School of Law.

In 1934 Pendergast had difficulty finding a U.S. senatorial candidate. He selected Truman, his fourth choice, and in November 1934 Truman was elected amid rumors that Pendergast had rigged the votes in Jackson County to ensure the victory.

As a U.S. senator, Truman was viewed at first as a Pendergast stooge, but he soon convinced his colleagues of his independence and intelligence. An ardent defender of Roosevelt's New Deal programs, Truman entered the national limelight during World War II as the head of a Senate committee that investigated defense spending. Truman drew praise for uncovering graft, mismanagement, and inefficiency in the U.S. war production industries.

In 1944 Roosevelt, who was running for an unprecedented fourth term, replaced Vice President Henry A. Wallace with Truman. After his reelection Roosevelt had little to do with his new vice president; before his death on April 12, 1945, he met only twice with Truman.

"Democracy is based on the conviction that man has the moral and intellectual capacity, as well as the inalienable right, to govern himself with reason and justice."
—Harry S. Truman

When he assumed office, Truman faced grave decisions in both domestic and foreign policy as World War II drew to a close. The fighting in Europe ended with Germany's surrender on May 7, 1945. Truman attended the Potsdam Conference in July to discuss the postwar future of Europe, but little was decided besides the division of Germany into zones to be governed by the Allies. U.S. relations with the Soviet Union began to chill as it became apparent that the Soviets would maintain control over Eastern Europe.

In August 1945 Truman approved the use of atomic bombs against Japan. On August 6 a bomb was dropped on Hiroshima, and three days later Nagasaki was also devastated by nuclear attack. Japan opened peace negotiations on August 10 and surrendered on September 2. Truman justified his actions based on the belief that without the use of the atomic bombs, U.S. troops would have had to invade the Japanese mainland at great loss of military and civilian life.

By 1946 it was clear that an official "cold war" existed between the United States and the Soviet Union. Truman maintained a strong stand against the Soviets and the danger of Communist intervention in Europe. In 1947 he announced the Truman Doctrine, which promised U.S. aid to countries that resisted Communist aggression. Based on this doctrine, Truman provided military and financial assistance to Greece and Turkey to help them to remain independent.

Truman followed up this initiative with the Marshall Plan of 1947. This plan aided the restoration of Western Europe by providing massive amounts of financial aid to rebuild the European infrastructure. In 1949 Truman encouraged the acceptance of the North Atlantic Treaty Organization (NATO), by which the United States and European nations not under Communist rule pledged mutual protection against aggression.

On the domestic front, Truman faced a difficult situation. In 1946 the Republican Party won control of both the U.S. House of Representatives and the Senate for the first time in a generation. Truman fought unsuccessfully to prevent the passage of the Taft-Hartley Act, also known as the labor management relations act (29 U.S.C.A. § 141 et seq.), which restricted some of the powers that labor unions had acquired in the 1930s. By 1948 it appeared that Truman would not win election to a full term.

At the Democratic National Convention in Philadelphia, Pennsylvania, Truman backed a platform plank that called for a federal civil rights bill that would ban racial discrimination in employment. Many southern Democrats walked out of the convention, formed the segregationist Dixiecrat Party, and nominated South Carolina governor strom thurmond for president. A left-wing offshoot, the Progressive Party, nominated Henry Wallace, Roosevelt's vice president before Truman, for president. The Republican Party nominated New York governor thomas e. dewey, who in the early weeks of the campaign appeared to have an insurmountable lead.

Truman demonstrated his political acumen by calling the Republican Congress back into session after the political conventions to consider his legislative proposals. When the Republicans turned these aside, he labeled them the "do nothing Congress" and began a cross-country campaign during which he delighted crowds with his "give 'em hell" speeches. To the surprise of most commentators, Truman beat Dewey by 114 electoral votes.

Truman made little progress on his domestic agenda, which he called the Fair Deal. His second term was beset with foreign problems. The Chinese Communists won control of their country, and in 1950 North Korea invaded South Korea. Truman authorized the sending of U.S. troops to Korea under the sponsorship of the United Nations to prevent the fall of South Korea to the Communist North Koreans. After General Douglas MacArthur led U.S. troops deep into North Korea, the Communist Chinese joined the fighting and pushed the U.S. forces back. Soon the war was a stalemate.

Truman's popularity declined after he removed MacArthur from his command for insubordination—the general had stated publicly that the United States should bomb China. Domestically, Truman took the controversial step of seizing the steel industry in 1952 to prohibit a strike that would have crippled the national defense. In youngstown sheet & tube co. v. sawyer, 343 U.S. 579, 72 S. Ct. 863, 96 L. Ed. 1153 (1952), popularly known as the Steel Seizure case, the U.S. Supreme Court refused to allow the government to seize and operate the steel mills and rejected Truman's argument that he had inherent executive power to issue the seizure order.

In 1952 Truman decided not to run for a second term. He retired to Independence, Missouri, to oversee the Truman presidential library but remained a prominent Democratic leader for the remainder of his life. He died on December 26, 1972, in Kansas City, Missouri.

Feedback
Flashcards & Bookmarks ?
Please log in or register to use Flashcards and Bookmarks. You can also log in with
Flashcards ?
My bookmarks ?
+ Add current page to bookmarks
References in periodicals archive ?
Harry S. Truman and Arctic are currently deployed to the 5th Fleet area of operations as part of the ongoing rotation to support Maritime Security Operations in the region.
Truman, Arctic assist stranded sailors
I used documents I discovered at the Harry S. Truman Presidential Library to demonstrate that the subsequent exchange of memoranda between Truman and his senior wartime advisors prompted him to convene the June 18, 1945, meeting at which the invasion of Japan was given final approval.
More on Hiroshima
This diary discovery reminds us once again that Harry S. Truman was an original.
Truman's revelation
Whitton snipped the ribbon and the Air Force provided a carefully orchestrated sonic boom high above them, standing next to her was Harry S. Truman. The former President told reporters that he had attempted to arrange for construction of such a traffic connection while he was presiding Judge of the Jackson County Court.
The man who loved roads: by all rights, President Truman should have been the "Father of the Interstate System," but he gave that place in history to his successor
Harry S. Truman, America's thirty-third president, got the familiar names he's known by during the first few days of his presidency, and they've stuck ever since.
Harry S. Truman: the extraordinary ordinary man
Our ally in the recent war, Uncle Joe Stalin, as the Accidental President Harry S. Truman called him, was growing horns and fangs that dripped blood.
The menopause of empire
ON APRIL 12, 1945, Harry S. Truman became the 33rd president of the United States.
Harry S. Truman: America's last great leader?
Schnapper edited The Truman Program: Addresses and Messages by Harry S. Truman (1949); and Louis W.
Truman, Harry S (1884-1972)
ATLANTIC OCEAN -- As part of French Air Defense week in July, French Dassault Rafale M Fighters conducted exercises with F/A-18E/F Super Hornets and E-2D Hawkeyes from Carrier Air Wing 1 (CVW) embarked aboard USS Harry S. Truman (CVN 75).
FRENCH AVIATORS Train Aboard TRUMAN
Foreign Aid and the Legacy of Harry S. Truman. Edited by Raymond H.
Foreign Aid and the Legacy of Harry S. Truman
The essays comprising "Origins of the National Security State and the Legacy of Harry S. Truman" explore the highly charged political environment in which the national security state was created and assess its broader implications for society, both civilian and military.
Origins of the National Security State and the Legacy of Harry S. Truman
Legal browser ?
Full browser ?
CITE
Site: Follow: Share:
Open / Close