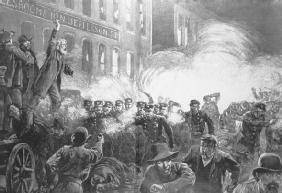 Feedback
Flashcards & Bookmarks ?
Please log in or register to use Flashcards and Bookmarks. You can also log in with
Flashcards ?
My bookmarks ?
+ Add current page to bookmarks
Mentioned in ?
References in periodicals archive ?
The anarchists were blamed and the police arrested eight leaders of what came to be known as the Haymarket Riot. Their trial began on June 19.
1886: Exploration and settlement; wars; government; civil rights; statistics
As governor of Illinois (1892-1896), he pardoned three anarchists convicted in connection with the HAYMARKET RIOT .
Altgeld, John Peter (1847-1942)
Consider the Homestead Steel strike in 1892, the Pullman strike of 1893 or the Chicago Haymarket riots of 1886.
Is trouble brewing in the workplace?
(31) Debs, then, is precisely the sort of "crafty agitator" against whom Rerum Novarum so perspicaciously animadverted in 1891, fully three years before Debs continued the tradition of labor violence whose locus classicus we must continue to find in the Haymarket Riots of 1886.
Indeed, one would be forced to concede that the Haymarket Riots and the Pullman Strike, although violent enough in and of themselves, do not yet constitute a pattern of violence sufficient to cast a pall of suspicion over the nascent labor movement in the United States.
Debs is different: Rerum Novarum and U.S. labor history
At last Demos ventures somewhat timidly into more recent centuries, to discuss the Chicago union-organized Haymarket riots of 1886, the "Red Scare"--era of Joseph McCarthy in the 1950s, and the daycare "abuse" cases of the last 30 years.
Broomsticks and politics
A MAY Day is International Workers' Day and commemorates the struggle of workers across the world after the Haymarket riots in Chicago on May 4 1886 when four strikers were killed by the police.
Question Time
For much of the world, May Day, May 1, is International Labor Day, but it is generally ignored by a US citizenry unmindful that it is a tradition born in Chicago in commemoration of the Haymarket Riots of 1886.
THE ISTHMUS REACTS, SUPPORTING US DEMONSTRATIONS FOR HUMANE MIGRANT REFORMS