(redirected from High crimes and misdemeanours)
Also found in: Wikipedia. 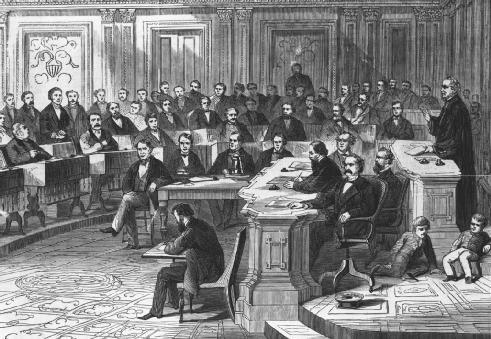 A depiction of the 1868 impeachment proceedings against President Andrew Johnson. The Senate's vote on the 11th Article of Impeachment fell one vote short of the twothirds majority needed to impeach Johnson. Two other articles were later defeated.

The offenses for which presidents, vice presidents, and all civil officers, including federal judges, can be removed from office through a process called Impeachment.

The phrase high crimes and misdemeanors is found in the U.S. Constitution. It also appears in state laws and constitutions as a basis for disqualification from holding office. Originating in English Common Law, these words have acquired a broad meaning in U.S. law. They refer to criminal actions as well as any serious misuse or abuse of office, ranging from Tax Evasion to Obstruction of Justice. The ultimate authority for determining whether an offense constitutes a ground for impeachment rests with Congress.

The exact meaning of the phrase cannot be found in the Constitution itself. Article II, Section 4, establishes, "The President, Vice President and all civil Officers of the United States, shall be removed from Office on Impeachment for, and Conviction of, Treason, Bribery, or other High Crimes and Misdemeanors." Treason and bribery are specific, but high crimes and misdemeanors is not. In fact, considerable debate occupied the Framers of the Constitution over the issue of impeachment, and the wording of the grounds for impeachment was itself controversial. A proposed offense of maladministration was rejected as being too vague and susceptible to political abuse. Finally, they chose to use a phrase from English common law that had no precisely settled meaning at the time yet at least connoted serious offenses.

The reason for the choice lies in the Framers' approach to the larger question of impeachment. Although borrowing language from the law they knew best, they explicitly chose not to imitate the English model of impeachment. Traditionally, this approach had allowed the British Parliament to conduct a simple review of charges and then remove officials by a majority vote. Instead, the Framers intended for removal from office to be the final step in a two-part process that began in the House of Representatives and, if charges should result, ended in a trial-like hearing before the U.S. Senate. Thus, two goals would be achieved: a full public inquiry into allegations, and, if necessary, the adjudication of those charges requiring a two-thirds majority for removal.

Generally, debate over the phrase high crimes and misdemeanors has split into two camps. The minority view is held by critics who undertake a literal reading of the Constitution. They maintain that high crimes means what it says—criminal activity—and argue that the Framers wanted only criminal activities to be the basis for impeachment. The generally accepted viewpoint is much broader. It defines high crimes and misdemeanors as any serious abuse of power—including both legal and illegal activities. Supporters of this reading believe that because impeachment is a public inquiry, first and fore-most, it is appropriate to read the phrase broadly in order to provide the most thorough inquiry possible. Thus, a civil officer may face impeachment for misconduct, violations of oath of office, serious incompetence, or, in the case of judges, activities that undermine public confidence or damage the integrity of the judiciary.

The vagueness of the standard has left much interpretive power to Congress. In 1868, President Andrew Johnson underwent impeachment proceedings when he ordered the firing of his secretary of war. His opponents charged that this order violated the Tenure of Office Act, which set the tenure of certain officials. Johnson escaped conviction in the Senate by only one vote, but the attempt to impeach him quickly came to be seen as a politically motivated mistake. In 1974, the House Judiciary Committee recommended that the full House of Representatives approve Articles of Impeachment against President richard m. nixon. It did not cite any single impeachable offense, but instead found a broad pattern of wrongdoing: Nixon had conspired with his advisers to obstruct federal and congressional investigations of the Watergate break-in, the burglarizing of the Democratic National Committee headquarters in Washington, D.C., which was eventually linked to the Nixon administration. Nixon resigned from office before the process could continue.

The dispute over what constitutes a high crime or misdemeanor reemerged in 1998 when the House Judiciary Committee voted to recommend that the House begin impeachment proceedings against President bill clinton. The House concurred with the recommendation, which included charges of perjury and obstruction of justice. Legal commentators debated for weeks about whether these charges were the type of high crimes and misdemeanors contemplated by the language of the Constitution, but the House nevertheless approved two of the four articles of impeachment. The trial then moved to the Senate, which failed to garner the necessary two-thirds majority to remove Clinton from office.