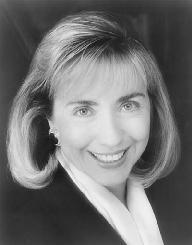 Attorney, professor, First Lady, and now senator Hillary Rodham Clinton created a new and dramatic role in national politics. With a distinguished career that ranged from working for the House Judiciary Committee to teaching Criminal Law and working as a lawyer, she assumed a key policy role in the administration of her husband, President bill clinton. From 1993 to 1994 she ran that administration's top legislative priority, the failed effort at health care reform. Not surprisingly, her role in the administration was quite controversial. She was also exposed to criticism in the Whitewater scandal. However, supporters praised her for her skills as a manager and negotiator.

Clinton was born on October 26, 1947, in Chicago, the eldest of three children, to Hugh E. Rodham, a drapery businessman, and Dorothy Howell Rodham, a homemaker. She became head of the local Young Republicans chapter as a first-year student at Wellesley College, in Massachusetts, but she eventually changed her party affiliation. Clinton's shift in political opinion is visible from her ongoing volunteer work for presidential candidates: In 1964, the high-school senior backed the conservative barry goldwater; in 1968, the political science major supported the liberal eugene mccarthy.

At Yale Law School, Clinton did research work for the Yale Child Study Center and for Senator Walter F. Mondale and also volunteered for the child advocacy group that later became the Children's Defense Fund.

While working as an editor on the Yale Review of Law and Social Action, she wrote the first of several articles on Children's Rights. She was troubled by the law's refusal to consider children competent to make their own decisions until the age of 18. She concluded that the law should presume competence in children from the age of 12. Her 1979 article "Children's Rights: A Legal Perspective" argued in favor of children having the right to make a broad range of decisions, from tailoring their education to leaving an abusive home.

Yale also introduced Clinton to Bill Clinton, a fellow law student. They briefly went separate ways after graduating in 1973—he to teach law in Arkansas, she to work at the Children's Defense Fund in Massachusetts. Then, in January 1974, the 26-year-old Clinton was asked to Washington, D.C., to help impeach President richard m. nixon, whose presidency was undercut by the Watergate scandal. The special counsel to the House Judiciary Committee hired her to be in charge of legal procedures for its inquiry. When Nixon resigned in August rather than face almost certain Impeachment, Clinton's career was on the rise.

The Clintons were married in October 1975. They taught law at the University of Arkansas School of Law, in Fayetteville. In addition to conducting her criminal law courses, Clinton ran the school's legal aid clinic, founded the nonprofit Arkansas Advocates for Children and Families, and worked on Jimmy Carter's 1976 presidential campaign. Afterward, President Carter named her to the board of directors of the Legal Services Corporation, which distributes federal funds to legal aid clinics nationwide. Over the next decade, she served on the boards of directors for national corporations and for the Children's Defense Fund. In 1980, she became a partner at the Rose Law Firm in Arkansas. Her husband, meanwhile, won election to five terms as governor of Arkansas and appointed her to head several committees, thus beginning the working partnership that would carry them to Washington, D.C. She chaired the Rural Health Advisory Committee and headed the Arkansas Education Standards Committee as well as holding other official posts.

In 1992, Clinton campaigned for her husband for president. Her speeches on domestic issues made clear to voters nationwide what voters in Arkansas already knew: She was her husband's political and intellectual equal and not merely the a spouse along for the ride.

After he took office in 1993, Clinton's husband named her to head his task force on health care reform. The reform was a key campaign promise, and the stakes were high. Most critics thought it inappropriate to appoint her. A common complaint was nepotism: the president could not be expected to fire his own wife if problems arose. This resistance largely subsided once Clinton began managing the 500-employee task force, and it was silenced after the U.S. Court of Appeals for the District of Columbia held in June 1993 that she was a de facto government official. Voters responded with mixed reactions in opinion polls, although a slim majority approved of her role. But lawmakers, despite bipartisan praise for her work with them, proved less receptive. Even a Democratic majority in Congress lacked sufficient votes to enact the plan developed by her task force.

"There is no formula for how women should lead their lives. that is why we must respect the choices that each woman makes for herself and her family. every woman deserves the chance to realize her god-given potential."
—Hillary Clinton

The Whitewater scandal created more controversy around Clinton. The issue began with a failed land deal that she and her husband had made in the 1980s while he was governor and she an attorney at the Rose Law Firm. It surfaced during the 1992 presidential campaign. By 1994, it became a flood of legal, political, and personal concerns: shady deals, improper influence, Tax Evasion, Bribery, cover-ups, congressional hearings, Independent Counsel, and even the suicide of deputy White House counsel Vincent Foster. Clinton's work at the Rose Law Firm placed her squarely in the middle of the controversy. In the spring of 1994, she admitted to having made some mistakes but claimed that neither she nor her husband had done anything criminal. She asserted that political enemies were trying to smear the administration.

Despite spending millions of dollars and obtaining convictions of several Clinton associates, special prosecutor Ken Starr was unable to prove that the Clintons had broken the law. As the case began to wind down, new controversy reignited the investigation. In the course of being deposed by Starr on Sexual Harassment charges by a woman named Paula Jones, President Clinton denied having had a sexual relationship with White House intern Monica Lewinsky. Starr issued a report, called a "referral" in which he accused the president of having perjured himself. As a result of the report, the Republican-led House passed Articles of Impeachment in December 1998. Hillary Clinton voiced her strong support of her husband, and in 1999 President Clinton was acquitted of the charges.

In 1999, Clinton announced that she would run for the Senate seat that had been held by Democrat Daniel Patrick Moynihan, who had announced his retirement. When New York City mayor Rudy Giuliani decided not to run, the Republican nomination went to U.S. Representative Rick Lazio. After a long and costly campaign, Clinton was elected senator from New York on November 7, 2000, becoming the first former First Lady to be elected to the United States Senate as well as the first woman elected statewide in New York. Clinton serves on the Senate Committees for Environmental and Public Works; Health, Education, Labor and Pensions. In 2003, she was appointed to the Senate Armed Services Committee becoming the first New Yorker to serve on that committee.

As a freshman senator, Clinton's greatest challenges arose in the aftermath of the September 11th Attacks in 2001. She worked with members of the New York delegation and Congress to secure funds for clean-up and recovery of Ground Zero (as the former World Trade Center site is now known) as well as health tracking for persons who worked in the area and grants to small enterprises who lost business as a result of the terrorist attacks.

In October, 2002, Clinton spoke in support of the resolution authorizing the United States to use force against Iraq, while voicing opposition to a unilateral attack. In early 2003 she proposed a funding formula for homeland security and also proposed a $7 billion Domestic Defense Fund that included $1 billion in funding for "high-threat" areas such as New York City and Washington, D.C.

Clinton has been the recipient of numerous honorary degrees and awards, including the National Association for Home Health Care's Claude Pepper Award, the Public Spirit Award of the American Legion Auxiliary, and the New York City Legal Aid Society's Servant of Justice Award. Clinton has written numerous op-ed pieces as well as articles for magazines and journals. She has published several books, including 1997's It Takes a Village, and Other Lessons Children Teach Us and the An Invitation to the White House (2000), both of which were best-sellers.

Over the last two decades, Clinton has been the subject of more than a dozen books and hundreds of articles. Many have recognized her for her advocacy of democracy and Human Rights, including Women's Rights and children's rights, as well as religious tolerance and health care. Many have vilified her for her promotion of the same. As long as she remains on the political stage, Hillary Rodham Clinton will be the focus of heated debates and discussions.

Halley, Patrick S. 2002. On the Road with Hillary: A Behind the Scenes Look at the Journey from Arkansas to the U.S. Senate. New York: Viking.