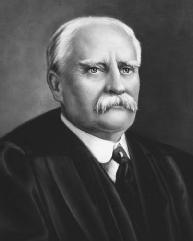 Horace Harmon Lurton epitomized late-nineteenth-century judicial conservatism. Whether he was on the state or federal bench, restraint characterized Lurton's opinions. After a successful period in private practice in the 1860s and 1870s, Lurton won election to the Tennessee Supreme Court in 1886. He was its chief justice in 1893; a federal judge on the U.S. Court of Appeals for the Sixth Circuit, in Cincinnati, from 1893 to 1909; and a professor and eventually law school dean at Vanderbilt University starting in 1898. In 1910, at age sixty-six, he became the oldest justice ever appointed to the U.S. Supreme Court.

Lurton was born in Newport, Kentucky, on February 26, 1844. The son of an itinerant physician-turned-preacher, he spent a humble childhood in Tennessee. The defining moment in his life came while he was a sixteen-year-old undergraduate studying at Douglas University, in Chicago. When the Civil War broke out, Lurton immediately left school to join the Confederate army. After refusing discharge for a lung condition, he was captured; escaped; and then, while helping conduct guerrilla raids on Union forces, imprisoned again. He was thought to be near death in the last months of the war when his mother successfully appealed to President Abraham Lincoln to release him for health reasons.

The experience of war gave Lurton new priorities. Rather than returning to finish his degree in Chicago, he chose to pursue law at Cumberland University Law School, in Lebanon, Tennessee. After graduating in 1867, he distinguished himself in private practice as a diligent, detail-oriented attorney. In 1875 he was appointed to fill a vacated judgeship in the Sixth Chancery Division of Tennessee, where he served for three years before financial pressures made him return to practicing law. The judgeship cemented his reputation, and his practice flourished over the next decade. In 1886 he ran for a seat on the Tennessee Supreme Court. Lurton won. For the next seven years, he was regarded as an eminently fair, patient, and courteous judge. Not the least of his admirers were his colleagues on the Tennessee high court: by a unanimous vote, they made him the court's chief justice in 1893. While on the court he also taught law at Vanderbilt University.

No sooner had Lurton been made chief justice of the Tennessee Supreme Court than President grover cleveland tapped him for the federal bench. Lurton resigned from the Tennessee Supreme Court and took his seat on the U.S. Court of Appeals for the Sixth Circuit, in Cincinnati. On the appellate court, Lurton continued to pursue the conservative legal philosophy that had guided his earlier career. He placed extreme importance on the Separation of Powers, preferring to have legislatures make laws and abhorring modification of the law by the courts.

In 1905 Lurton served as dean of the Vanderbilt University law school. He was nearly appointed to the U.S. Supreme Court in 1906 by the reform-minded President Theodore Roosevelt. The Republican president's selection was a measure of the respect that the Democratic judge had garnered. Roosevelt only backed off from appointing Lurton when he was persuaded to choose a Republican instead.

In December 13, 1909, President William Howard Taft had no qualms about appointing a Democrat, or about appointing the oldest candidate in Supreme Court history. Some opposition was raised over Lurton's age; more complaints were directed at the narrowness of his outlook. Nevertheless, the Senate approved the nomination and Lurton received his commission only one week later. There proved to be no reason for worry: as an associate justice, Lurton largely followed the lead of the majority. Commentators are generally at a loss to find much of note in Lurton's tenure on the Court, which lasted four years until his death. It was the Progressive Era, and the Court was often concerned with the issue of government regulatory power, particularly in antitrust, the area of law devoted to enforcing fair competition in business. Although he had always resisted so-called judge-made law, Lurton joined in the Court's unanimous decisions in groundbreaking antitrust cases such as Standard Oil v. United States, 221 U.S. 1, 31 S. Ct. 502, 55 L. Ed. 619 (1911), and American Tobacco Co. v. United States, 221 U.S. 106, 31 S. Ct. 632, 55 L. Ed. 663 (1911).

"The duty of the court is limited to the decision of actual pending controversies."
—Horace Lurton