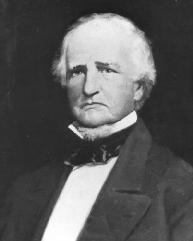 Benjamin Chew Howard was a lawyer who served as the Supreme Court reporter of decisions from 1843 to 1861. Howard, born November 5, 1791, in Baltimore, was the son of a distinguished Revolutionary War officer and the grandson of the president of the Pennsylvania Court of Errors and Appeals before the Revolution. Howard earned bachelor's and master's degrees from the College of New Jersey (later known as Princeton University). In 1812, he began the study of law, which was interrupted by military service during the War of 1812. Howard was a captain in the war and played a prominent role in the defense of Baltimore during the Battle of North Point, fought in September 1814.

Following the war, Howard resumed his legal studies. He was admitted to the Maryland bar in 1816. Active in the Maryland Democratic Party, in 1820, he was elected to the Baltimore City Council, and in 1824, he won a seat in the Maryland House of Delegates. In 1829, he was elected to the U.S. Congress, where he served four terms. During his time in Congress, he was chairman of the House Foreign Relations Committee for several years. In 1840, he left Congress to return to Maryland state politics, serving as a senator in the Maryland General Assembly. In January 1843, he resigned before the expiration of his term, to become reporter of the U.S. Supreme Court, a position created by Congress in 1816.

As reporter, Howard was primarily responsible for editing, publishing, and distributing the Court's opinions. He replaced Richard Peters, who was fired after he disagreed with several of the justices about whether their opinions should be published in the reports. Howard, though highly praised for publishing thorough and well-edited reports, did create a controversy of his own when he refused to include the complete arguments raised by both sides in a fugitive slave case decided by the Court, thus calling his impartiality into question.

In Howard's day, the reporter was paid a modest yearly salary and usually earned additional income selling copies of the bound volume in which an important case appeared or printing the opinion separately in a pamphlet for sale to the public. When the Dred Scott decision outlawing Slavery was issued by the U.S. Supreme Court in 1857, the U.S. Senate sought to publicize it as broadly as possible and printed 20,000 copies for free distribution to the public (dred scott v. sandford, 60 U.S. [19 How.] 393, 15 L. Ed. 691 [1856]). Howard protested strongly that his income from the sale of the opinion would suffer from the competition. As a result, the Senate voted to pay him $1,500 in compensation and agreed not to distribute its version until Howard's bound volume and pamphlet version were made available.

Howard, who edited 24 volumes of reports, remained active in politics while Supreme Court reporter. He resigned from the Court in 1861 to run as the Democratic candidate for governor of Maryland. Following his defeat, Howard retired from public life. He died March 6, 1872, in Baltimore.