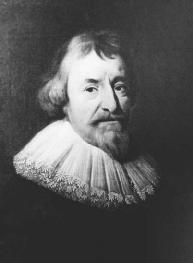 Hugo Grotius, also known as Huigh de Groot, achieved prominence as a Dutch jurist and statesman and is regarded as the originator of International Law.

Grotius was born April 10, 1583, in Delft, Netherlands. A brilliant student, Grotius attended the University of Leiden, received a law degree at the age of fifteen, and was admitted to the bar and began his legal practice at Delft in 1599. It was at this time that he became interested in international law, and, in 1609, wrote a preliminary piece titled Mare liberum, which advocated freedom of the seas to all countries.

In 1615, Grotius became involved in a religious controversy between two opposing groups, the Remonstrants, Dutch Protestants who abandoned Calvinism to follow the precepts of their leader, Jacobus Arminius, and the Anti-Remonstrants, who adhered to the beliefs of Calvinism. The dispute extended to politics, and when Maurice of Nassau gained control of the government, the Remonstrants lost popular support. Grotius, a supporter of the Remonstrants, was imprisoned in 1619. Two years later he escaped, seeking safety in Paris.

In Paris, Grotius began his legal writing, and, in 1625, produced De jure belli ac pacis, translated as "Concerning the Law of War and Peace." This work is regarded as the first official text of the principles of international law, wherein Grotius maintained that Natural Law is the basis for legislation for countries as well as individuals. He opposed war in all but extreme cases and advocated respect for life and the ownership of property. The main sources for his theories were the Bible and history.

"What the consent of all men makes known as their will is law."
—Hugo Grotius

Grotius spent the remainder of his years in diplomatic and theological endeavors. From 1635 to 1645, he represented Queen Christina of Sweden as her ambassador to France. He pursued his religious interests and wrote several theological works. Grotius died August 28, 1645, in Rostock, Germany.