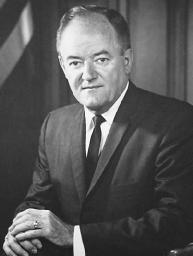 Hubert Horatio Humphrey served as a U.S. senator from Minnesota and as the thirty-eighth vice president of the United States. From his election to the U.S. Senate in 1948 to his death in 1978, Humphrey was the quintessential Cold War liberal. His unsuccessful presidential campaign in 1968 was weakened by his support of President lyndon b. johnson's Vietnam War policies.

Humphrey became a leader in Minnesota Democratic Party politics during World War II. After narrowly losing the Minneapolis mayoral election in 1943, he cemented his position in 1944 when he united the Minnesota Democratic and Farmer-Labor parties into the Democratic Farmer-Labor (DFL) party. The Farmer-Labor party had advocated more radical political policies in the 1930s and 1940s, and had gained national attention through Governor Floyd B. Olson, of Minnesota. In the 1930s Olson and the Farmer-Labor party had advocated more aggressive governmental intervention to deal with the Great Depression. Olson criticized President franklin d. roosevelt for not doing enough to help the nation's unemployed. By the mid-1940s, the party had attracted many Communist-influenced members. In 1947 Humphrey and his allies forced the more radical Farmer-Labor members out of leadership positions and ultimately out of the DFL. On a national level, Humphrey helped form Americans for Democratic Action, a liberal organization that trumpeted its anti-Communist credentials.

His political leadership paid quick dividends. In 1945 he was elected mayor of Minneapolis by more than thirty thousand votes. He increased his margin of victory to fifty thousand in his 1947 reelection campaign. As mayor he rooted out political graft and corruption and began to implement pieces of his liberal agenda. He secured the passage of the first municipal fair employment act in the United States and gained additional funds for public housing and Welfare.

"There are not enough jails, not enough policemen, not enough courts to enforce a law not supported by the people."
—Hubert H. Humphrey

Humphrey galvanized liberal Democrats in 1948 at the Democratic National Convention. Southern Democrats on the platform committee had rejected President Harry S. Truman's civil rights proposals. Humphrey, a delegate to the convention and a candidate for the U.S. Senate, led a fight from the convention floor to restore the Civil Rights plank. His passionate oratory helped bring back the proposals and fixed in the public mind the image of Humphrey as a fiery liberal, an image he would evoke the rest of his public career.

He was elected to the Senate in 1948, and found that his aggressive style clashed with the gentleman's-club atmosphere of that institution. A quick learner, he sought the mentorship of Lyndon Johnson, soon to be Senate majority leader. Humphrey was reelected to the Senate in 1954 and 1960. In 1960, along with Senator john f. kennedy and Johnson, he sought the Democratic presidential nomination. Following victories by Kennedy in the Wisconsin and West Virginia primaries, Humphrey dropped out of the race and stood for reelection to the Senate.

During the Kennedy administration, Humphrey displayed his command of parliamentary procedure and political persuasion. He became assistant majority leader and helped pass the Limited Test Ban Treaty of 1963. Following Kennedy's assassination in November 1963, Humphrey worked closely with President Johnson to pass the many pieces of social welfare legislation that Johnson dubbed his Great Society program. Humphrey's plan for providing federal medical insurance to older people, called Medicare, was enacted. Most important, Humphrey played a critical role in securing the passage of the Civil Rights Act of 1964 (42 U.S.C.A. § 2000a et seq.).

Humphrey had always dreamed of becoming president. When President Johnson announced in March 1968 that he would not seek reelection, Humphrey entered the race against Senator eugene mccarthy, of Minnesota, and Senator robert f. kennedy,of New York. McCarthy, a longtime friend and ally of Humphrey's, opposed the Vietnam War, as did Kennedy. Humphrey continued to support it. By May Humphrey had secured enough delegates to win the nomination. In June Kennedy was assassinated. The Democratic National Convention, in Chicago, was a debacle. Confrontations between antiwar demonstrators and Chicago police officers led to a series of violent outbursts by the police. Though Humphrey won the nomination, he remained staunchly loyal to Johnson and refused to make a clean break on Vietnam policy, which would have won votes from disaffected Democrats. In November Republican richard m. nixon won the election with 301 electoral votes to Humphrey's 191. Humphrey lost the popular vote by less than one percent.

Following his defeat Humphrey returned to Minnesota and taught again at Macalester College. In 1970 he was reelected to the Senate. In 1972 he campaigned unsuccessfully for the Democratic presidential nomination. Reelected to the Senate again in 1976, Humphrey soon was engaged in a personal battle with cancer. He died at his home in Waverly, Minnesota, on January 13, 1978.

Humphrey, Hubert H. 1991. The Education of a Public Man: My Life and Politics. Minneapolis: Univ. of Minnesota Press.