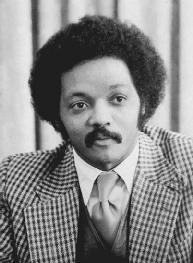 Jackson was born October 8, 1941, in Greenville, South Carolina. His mother, Helen Burns, was only 16 when Jackson was born. His father, Noah Louis Robinson, acknowledged Jackson as his son, but because he was married to another woman and had several other children, he was not involved in Jackson's life. When he was three, his mother married Charles Jackson. The family eventually moved out of the poor section of town to a new housing project, where, for the first time, they enjoyed hot and cold running water and an indoor bathroom. Jackson was legally adopted by his stepfather when he was 12. He has one brother, Charles Jackson Jr.

Jackson attended the all-black Sterling High School, in Greenville, where he was a star football player. After graduation in 1959, he went north to the University of Illinois on a football scholarship. The following year he transferred to North Carolina Agricultural and Technical College (North Carolina A&T), a mostly black school in Greensboro. There he met his wife, Jacqueline Lavinia Brown, a fellow student who had also grown up in poverty. The couple married December 31, 1962, and have five children: Santita, Jesse Louis Jr. (Democratic representative, second congressional district of Illinois), Jonathan Luther, Yusef DuBois, and Jacqueline Lavinia.

While at North Carolina A&T, Jackson began the work that would make him a widely recognized civil rights leader. He led a series of protest demonstrations and sit-ins throughout the South and joined one of the first organized groups in the Civil Rights Movement, the congress of racial equality (CORE).

After graduating from college in the fall of 1964, Jackson left the fledgling civil rights movement and moved north again, to attend Chicago Theological Seminary. He immersed himself in his studies, determined to learn how he could bring about change through the ministry. Then, in 1965, the civil rights movement began to gain momentum, and Jackson wanted to be a part of it. He joined the Southern Christian Leadership Conference (SCLC) of Martin Luther King Jr, and expanded its Operation Breadbasket, an economic campaign that used boycotts and negotiations to secure jobs for minorities. Six months before he was to graduate from the seminary, he left to work full-time for the SCLC. Nevertheless, he was ordained a Baptist minister in 1968.

Jackson saw King as his mentor and role model, and he became King's protégé. He worked closely with King and the other SCLC leaders and was with King when King was assassinated on April 4, 1968.

In 1969 Jackson organized the first Black Expo, a promotional festival for the companies involved in Operation Breadbasket. The expo was intended to be an annual fund-raiser for the SCLC, but Jackson had quietly incorporated the event independently. SCLC officials were enraged, and Jackson finally left the organization.

In the early 1970s, Jackson formed Operation People United to Serve Humanity (Operation PUSH), with the goal of economic empowerment for the "disadvantaged and people of color." He negotiated with such large corporations as the Coca-Cola Company, Heublein, and Ford Motor Company to increase minority employment and minority-owned dealerships and franchises. He also began holding rallies at high schools to raise the self-image of African–American students. He stressed the importance of education, personal responsibility, and hard work to achieve one's goals. Jackson's work with teenagers attracted the attention of President jimmy carter, whose administration rewarded Jackson with grants and contracts to continue his outreach. He named his school ministry PUSH for Excellence, or PUSH-Excel.

During the late 1970s and early 1980s, Jackson emerged as a preeminent African American leader in the United States. He decided to make a bid for the presidency. He mounted an ambitious voter registration drive throughout the South, and barnstormed through Western Europe enlisting support among U.S. service personnel. In an effort to enhance his image and prove that his expertise extended beyond domestic matters, Jackson traveled to trouble spots such as the Middle East, Latin America, and Cuba to meet with leaders there. In 1983, he negotiated the release of Lieutenant Robert O. Goodman Jr., a U.S. citizen whose jet had been shot down over Syrian-held territory in Lebanon.

Critics dismissed these activities as opportunistic grandstanding. Particularly troubling to some was Jackson's perceived anti-Semitic bias. During a private conversation in 1984, Jackson referred to Jews as Hymies and to New York as Hymietown. He later apologized. A short time later, Louis Farrakhan, head of the controversial Nation of Islam and a Jackson supporter, threatened the reporter who had written about Jackson's remarks. Jackson later distanced himself from Farrakhan and his organization because of their perceived militant anti-white and anti-Semitic stance.

Jackson placed third in the 1984 presidential primaries, behind former vice president Walter F. Mondale and Colorado senator Gary W. Hart. His delegate votes did not give him the clout he needed to compel the Democrats to accept his controversial platform proposals. Jackson gracefully conceded the nomination to Mondale and gave a rousing speech at the Democratic National Convention in San Francisco, which was in part a response to his critics:

If in my low moments, in word, deed, or attitude, through some error of temper, taste, or tone, I have caused anyone discomfort, created pain, or revived someone's fears, that was not my truest self…. I am not a perfect servant. I am a public servant doing my best against the odds. As I develop and serve, be patient. God is not finished with me yet.

After the convention, Jackson resumed his duties as head of Operation PUSH. He also continued to be active in progressive causes, leading what he called a counter inaugural march and prayer vigil in January 1985, and participating in a reenactment of the civil rights march from Selma, Alabama, to Montgomery, Alabama, in March 1985. That same year, Jackson formed the National Rainbow Coalition, his vision of a modern populist movement comprising African Americans, working families, liberal urbanites, Hispanics, Women's Rights groups, college faculty and students, environmentalists, farmers, and labor unions—a cultural as well as racial alliance searching for alternatives within the Democratic Party.

Jackson made another run for president in 1988 and finished second behind Michael Dukakis in the primaries. However, much to his disappointment, he was not chosen as the vice presidential nominee.

After the 1988 election, Jackson moved from Chicago to Washington, D.C., and was elected one of the city's "shadow senators." In this unpaid, nonvoting position, which was created by the Washington City Council, Jackson represents the district's interests on Capitol Hill. His main responsibility was to lobby Congress for statehood for the nation's capital.

In the 1990s and into the 2000s Jackson continued to be the leading spokesman for civil rights issues on both the domestic and international fronts. He called on the African American community to take action against the violence that was claiming so many of its young people. He advocated for such issues as universal health care and equal administration of justice in all U.S. cities. And, in 1996, in an effort to maximize efforts, the Rainbow Coalition and Operation PUSH merged to form Rainbow/PUSH Coalition, which remains devoted to education, public policy changes, and social and economic empowerment.

"America is … like a quilt—many patches, many pieces, many colors, many sizes, all woven and held together by a common thread."
—Jesse Jackson

In 1997, President bill clinton and Secretary of State madeleine albright named Jackson as Special Envoy for the President and Secretary of State for the Promotion of Democracy in Africa. He has met with many of the leaders of African nations in support of this directive. He also has served as an international diplomat on a number of other occasions, and in 1999, negotiated the release of U.S. soldiers held in Kosovo. In 2000, President Clinton awarded Jackson the highest civilian honor, the Presidential Medal of Freedom, for his national and international civil rights efforts.

A tireless activist, Jackson maintains a whirlwind schedule, traveling to schools and universities for speaking engagements, appearing on news programs, and writing a weekly syndicated column that provides political analysis. He has received numerous awards and commendations throughout his career, including the NAACP's Spingarn Award. He also has been the recipient of more than 40 honorary degrees.