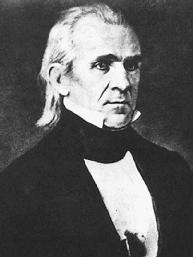 "The people of this continent alone have the right to decide their own destiny."
—James K. Polk

James Knox Polk, eleventh president of the United States, served just one term in office, but in that time he was extremely influential in shaping the country's evolution into a large and politically formidable nation. Polk's primary achievements came in the area of foreign affairs, where he completed the annexation of Texas; directed the Mexican War (1846–48); and negotiated with Great Britain for the acquisition of the Oregon territory. In domestic policy, Polk was a strong advocate for lowering tariffs and establishing an independent treasury for the United States. Historians and presidential scholars consistently rate Polk among the most effective and important presidents of the United States.

James Polk was born on November 2, 1795, in Mecklenburg County, North Carolina. He graduated from the University of North Carolina at Chapel Hill and went on to study law, establishing a successful practice in Columbia, Tennessee.

Polk soon embarked on a political career, being elected to the Tennessee legislature in 1823 and the U.S. House of Representatives in 1825. In Congress, Polk fought to defend individual freedoms, the rights of the states against the centralizing tendencies of the national government, and a strict interpretation of the Constitution. In 1839 Polk was elected governor of Tennessee. However, his two-year term in office was undistinguished, and he was defeated in the 1841 and 1843 gubernatorial races.

After his second defeat, Polk's political career appeared to be over, but events took a surprising turn. Martin Van Buren, who had served as Andrew Jackson's vice president from 1833 to 1837 and as president from 1837 to 1841, was expected to be the Democratic Party's presidential nominee for the 1844 election, but Van Buren's candidacy was derailed when he announced in April 1844 that he was opposed to the annexation of Texas on the grounds that it would constitute aggression against Mexico. Van Buren's support immediately eroded, because the annexation of Texas was a controversial political item widely supported by Andrew Jackson and his followers. By the time the Democrats held their nominating convention in late May, the party was in turmoil. Van Buren's supporters failed to generate the support needed for their candidate and Polk was nominated to be the presidential candidate instead.

The Whig presidential candidate in 1844 was the powerful and influential Henry Clay of Kentucky, who had held important positions in both the House and the Senate in addition to serving as Secretary of State under John Quincy Adams. The campaign was hard fought and bitter. Polk eventually won with 170 electoral votes compared with Clay's 105; in the popular vote, Polk received just 38,000 more votes than Clay, out of the almost 2,700,000 votes cast.

The Polk administration added approximately 1.2 million square miles to the United States, increasing its size by fifty percent. The addition resulted from the three major foreign policy matters Polk oversaw: the annexation of Texas, the Mexican War, and negotiations with Great Britain over the Oregon territory.

Polk inherited the Texas issue from the administration of John Tyler. Tyler had wrestled with Congress over methods for annexing Texas, which had existed as the independent Lone Star Republic since winning its independence from Mexico in 1836. Tyler and Congress had agreed that Texas would be given the opportunity to vote for annexation, and Polk continued this approach. The Texas congress eventually approved annexation and wrote a state constitution, which the voters approved in a general Referendum. In December 1845 the U.S. Congress completed the transaction by admitting Texas as the twenty-eighth state.

The third major foreign policy issue requiring Polk's attention was the dispute between the United States and Great Britain over the Oregon territory, which stretched from the northern boundary of California to the Alaska panhandle, including what is now Oregon, Washington, and British Columbia. Both countries claimed the area but had agreed in 1818 to occupy it jointly, with the provision that either party could terminate the agreement with a year's notice. The United States had repeatedly requested to resolve the issue by extending the forty-ninth parallel boundary that existed between the two countries east of the Rocky Mountains, but Britain had refused, insisting on the Columbia River as the boundary.

The situation had remained unresolved, and British fur traders had continued to dominate the area into the 1830s. At that time, however, increasing numbers of U.S. settlers migrated into Oregon and pressed the United States to address their needs and defend their interests. After the 1844 presidential election, the issue became heated. As U.S. statements on the issue became more angry and aggressive, the British government grew concerned that war might break out, and it entered into earnest negotiations with the United States. In July 1845 Polk once again offered to draw the boundary at the forty-ninth parallel, but the British minister in Washington rejected the offer. Furious, Polk withdrew the offer, instead reasserting the U.S. claim to the entire territory.

In his first message to Congress in December 1845, Polk continued this hard line on Oregon, asking Congress to provide the one year's notice that the United States was terminating its joint occupancy agreement with Great Britain. In addition, he asked that jurisdiction be extended to Americans living in Oregon and that military protection be provided to emigrants along the route to Oregon. Finally, Polk reasserted the Monroe Doctrine, which held that North America was not open to any further colonization by European powers. Polk's tough stance apparently spurred Great Britain to renew negotiations, and this time it agreed to the forty-ninth parallel boundary. The treaty was signed on June 15, 1846.

A principal goal of Polk's domestic agenda was to eliminate the high tariffs that had been imposed in 1842 under the Tyler administration. Polk believed that low tariffs were crucial for the success of the agricultural sector, and after strong and sustained Lobbying, he was able to persuade Congress to reduce tariffs in July 1846.

Despite Polk's many successes, presidential scholars agree that he utterly failed in his ability to foresee the catastrophic consequences that the Slavery issue would have for the nation. A slaveholder with plantations in Tennessee and Mississippi, Polk never actively defended slavery, but he failed to see the importance that it would have, instead believing that it was an aggravating side issue that hampered the resolution of more important problems.

Polk left office when his term ended in 1849, remaining faithful to his election promise that he would serve only one term as president. Polk returned to Tennessee exhausted and in ill health. Just three months after leaving office, Polk died unexpectedly on June 15, 1849. He was fifty-four years old.

Feedback
Flashcards & Bookmarks ?
Please log in or register to use Flashcards and Bookmarks. You can also log in with
Flashcards ?
My bookmarks ?
+ Add current page to bookmarks
References in periodicals archive ?
President James Polk was the first of our Presidents to act truly
The president as commander in chief
JAMES POLK WAS without question one of the most ambitious and successful American presidents in history.
Conservative internationalism
President Harrison's running-mate was John Tyler, who succeeded him in very short order and annexed Texas just before he left the White House to make room for James Polk. President Polk was elected on an expansionist platform over Henry Clay, the straddling Whig.
Manifest destiny: many 19th-century Americans believed their young nation was destined to extend the benefits of freedom and opportunity across the continent--from sea to shining sea
This lesson plan uses two pages of Lincoln's "Spot Resolutions," as well as photographs of James Polk, John L.
Lincoln's Spot Resolutions. Teaching with Documents
Rounding out the top eleven are Ronald Reagan (8th), Dwight Eisenhower (9th), James Polk (10th), and Woodrow Wilson (11th).
Rating the presidents of the United States, 1789-2000: a survey of scholars in political science, history, and law
President James Polk set the stage for the Mexican-American War when he encouraged Texans to accept annexation by assuring them that the United States would uphold their claims of land south of the Nueces to the Rio Grande.
Borderlands
Two years later McGill also prevented two other Trustee denials of awards to James Polk and Jack White.
The Pulitzer Diaries: Inside America's Greatest Prize
war since the Mexican-American clash under President James Polk in 1846.
Disarmed and Dangerous: The Radical Lives and Times of Daniel and Philip Berrigan
"My favorite Mafia story," said James Polk, senior producer for CNN Special Assignment, "Is the tape where one says to the other, |Be careful, this could be bugged.' So the other guy starts to whisper."
IRE notebook: one reporter finds more than dry case studies at IRE
At first a Federalist, he became a conservative Democrat, serving as Secretary of State (1845-49) under <IR> JAMES POLK </IR> and dealing with the British claims to Oregon, the annexation of Texas, and the Mexican War.
Buchanan, James (1791-1868)
It effectively began with James Polk and the Mexican-American War.
Waging war from the Oval Office
Legal browser ?
Full browser ?
CITE
Site: Follow: Share:
Open / Close